In common with rival JPMorgan, the bank increased credit loss provisions due to a faltering energy market, but what else happened in its first-quarter?

In a week when coal miner Peabody Energy filed for bankruptcy and rival bank JPMorgan Chase & Co. (JPM -0.69%) increased its provision for credit losses by 46% largely because of pressure on its energy, metals and mining clients, investors' focus was naturally on Wells Fargo's (WFC 0.46%) energy portfolio. Let's take a look at how credit loss provisions hit income at Wells Fargo, and the other key takeaways from the first-quarter report.

Wells Fargo first quarter: The raw numbers
It's a good idea to separate interest and non-interest income in a bank's earnings report, so here are the key numbers.

As you can see below, the increase in credit loss provisions of $478 million significantly profitability, even though oil and gas loans only make up 1.9% of Wells Fargo's outstanding loans. In fact, if credit loss provisions had been stable then income before income tax expense would have risen 4.9% instead of the reported 1% decline.

Interest income
Aside from credit loss provisions, the two key measures to follow here are net interest margin (NIM) and loan growth. NIM is the difference between the interest a bank's investments generates and interest expense divided by its average interest earning assets. A higher NIM is better.

As you can see below, the bank is doing a pretty good job of increasing net interest income while NIM continues to decline. Incidentally, JPMorgan did  better with its net yield on interest earning assets, increasing it to 2.3% from 2.23% the previous quarter. 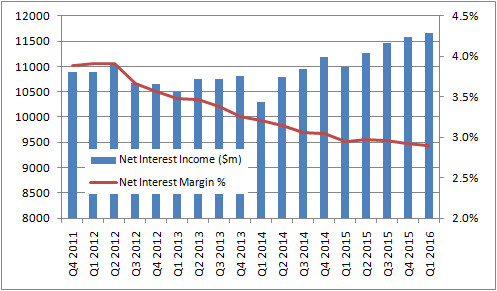 One way Wells Fargo is managing to grow net interest income is through expanding its loan book through organic growth and via acquisitions. For example, total loans increased a total of $30.7 billion from the previous quarter to $947.3 billion, largely thanks to a $24.9 billion contribution from the acquisitions made from GE Capital. Sometimes banks will take on riskier loans with higher interest rates in order to juice NIM. Fortunately for investors, Wells Fargo is typically a conservative underwriter and unlikely to have taken on bad debt.

Wells Fargo management expects it to continue at the high-end of its target range of 55%-59% for the full-year. By way of comparison, JPMorgan's efficiency ratio was 59.5% in the first-quarter compared to 61.8% a year ago. Clearly, JP Morgan is doing better than Wells Fargo in terms of reducing the efficiency ratio -- a key point as non-interest income growth is proving hard to come by in a low-growth economy.

Looking ahead
All told, it's clearly a difficult market for the banks and Wells Fargo and JPMorgan are both finding it hard to grow earnings as the economy continues to grow moderately and interest rates (and the NIM) remain low. In addition, both banks got hit by the deteriorating energy market, and there is no telling when energy market conditions will improve.

Focusing on Wells Fargo, if the economy remains in moderate growth mode, the bank will need to increase its interest income by growing its loan book, while trying to reduce its efficiency ratio on the non-interest income side.