Despite the company’s commitment to its payout, global credit is tightening.

In an environment where interest rates are rock-bottom, income-seeking investors are searching high and low for higher yields. That's forcing some to take on the elevated level of risk that's associated with high-yield stocks. At an 8.3% yield, Seaspan (ATCO 0.98%) certainly qualifies for the high-yield stock category, which, of course, raises the question of whether that yield is a safe bet. To determine that, we need to take a closer look at its cash flow and its balance sheet.

How safe is the cash flow?
The foundation of any dividend is the underlying cash flow that a company uses to fund its dividend. The more secure its cash flow, the better the foundation of the dividend. In Seaspan's case, its cash flow is backed by long-term, fee-based contracts. As the slide below shows, it currently has an average of six years remaining on its contracts with only 2% to 3% of its revenue for this year is coming up for renewal. 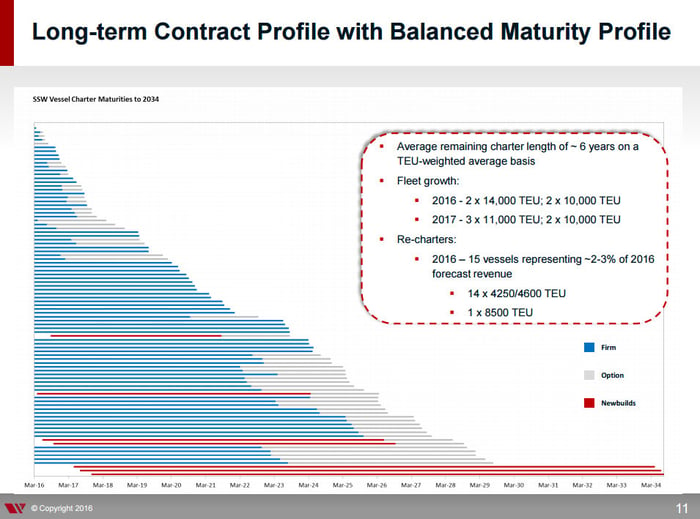 Because of this, Seaspan shares some similarities to a pipeline company like Kinder Morgan (KMI 0.05%), which derives the bulk of its cash flow from fee-based assets that are signed to long-term contracts. In Kinder Morgan's case, it will derive 91% of its revenue from fee-based assets this year, which rises to 97% when its commodity price hedges are added to the mix. That's very comparable to Seaspan's revenue, which is 100% backed by fee-based contracts this year with less than 3% of that potentially exposed to contract renewals. Furthermore, Seaspan has $6 billion in future revenue under contract, which provides a very strong base of support for its dividend over the next few years.

The other cash flow number to look at is the percentage of cash flow that it's paying out to investors. In 2015, Seaspan generated $432.9 million in cash available for distribution to shareholders. However, it only paid out $159.3 million in dividends. That works out to a 37% payout ratio, which is a lot better than the more than 90% payout ratio that Kinder Morgan and most of its pipeline peers had been comfortable paying out in the past.

How safe is its balance sheet?
The other major factor affecting the safety of any company's dividend is its balance sheet. This is where Seaspan could potentially run into trouble because, like Kinder Morgan, it uses a lot of debt to grow. As the chart below notes, it has now borrowed more than $3 billion to grow its asset base to north of $6 billion: 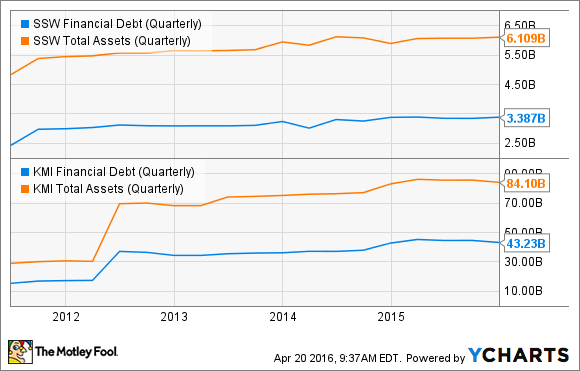 That's also pretty comparable to Kinder Morgan, which has borrowed more than $43 billion to build or buy $84 billion in assets. As such, both have a slightly more than 50% debt-to-asset ratio.

That leverage is both a benefit and a potential problem. The problem lies in the fact that Seapan needs to have continued open access to the debt market in the future to fund its growth, especially since it has a large pipeline of newbuilds to fund over the next few years. For 2016 the company has $375 million in capex requirements with another $295 million to be funded next year. While, some of that capex will be funded with internally generated cash flow that the company retains, the rest will need to be funded by issuing new debt and possibly equity.

That's a cause for concern because the capital markets aren't always open for business. Just ask Kinder Morgan, which had to reduce its dividend by 75% late last year because it could no longer get the capital it needed to fund its capex plans at favorable terms. The same thing could potentially happen to Seapsan given its capex needs and the fact that the global economy is starting to slow, especially surrounding global trade in China, which could lead banks to be more cautious. Those economic concerns already prompted Seaspan to announce that it will only maintain its dividend at its current level in 2016, as opposed to growing it as it had the past few years. That said, if the company's access to credit dries up, its dividend could be cut, which is what happened to it during the financial crisis.

Investor takeaway
Seaspan's dividend is backed by strong, fee-based cash flow as well as the fact that it doesn't pay out everything it earns. That said, the company has borrowed heavily in the past to fund growth and it needs to continue to borrow to fund future growth. That could prove to be problematic if the global credit markets shut their doors. In other words, while Seaspan's dividend looks safe right now, there is elevated risk for a payout cut in the future if global credit markets freeze up.