It's been rough sailing for Seaspan (NYSE:ATCO) over the last two years, but it finally looks like this shipper has turned the corner. Not only are higher charter rates helping drive the company's performance, but a recent change in the board of directors is helping the containership company sail into safer waters. 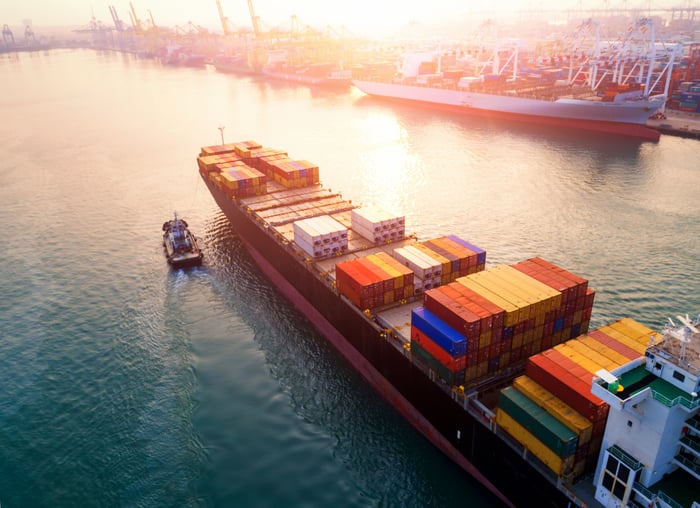 The fundamental picture is picking up for the shipping industry. Unlike a couple years ago when the supply of containerships increased and charter rates plummeted, the industry dynamic has reversed now, with supply dropping quickly. The industry's order book is near its lows of the last 20 years, so online supply won't be making a stark jump for a while. And shippers have been delaying deliveries of their ships, helping stymie supply growth. Now idle ships (above the very small 500 TEU, or twenty-foot equivalent unit) are just 1.6% of the fleet. This picture shouldn't change much in the near term, either. Meanwhile, demand has been growing briskly, with seaborne container trade up 6.8% in 2017. That sets up a nice fundamental story for shippers, especially Seaspan, the largest player in the industry. Charter rates have already been on the upswing. While President Trump has been spoiling for a trade war, this should have limited to no effect on Seaspan, which has long-term, locked-in contracts. Its operating fleet of 112 vessels has a weighted average contract of five years and approximately five years old.

While the improved charter rates are absolutely a boon for Seaspan, key changes at home may be even more important, at least in the long term.

After joining the board in April 2017, David Sokol took over as chairman in July, and he's made numerous moves that have helped Seaspan regain its course. You might remember Sokol from his days as the chair of MidAmerican Energy, owned by Warren Buffett's Berkshire Hathaway. Buffett ousted Sokol following an ethics breach in 2011. For some investors, this might be a dealbreaker straight away, but Sokol's business acumen has never been questioned.

One of Sokol's earliest moves at Seaspan was to clean up the compensation structure that incentivized former CEO Gerry Wang to expand Seaspan's fleet. Not long after his ascension to chairman, Sokol began renegotiating Wang's five-year contract that had been signed in 2016. In April, Seaspan cut compensation that rewarded Wang for Seaspan's transactions  and agreed to renegotiate his compensation by the end of June 2016. That date rolled around and the company extended the negotiations until the end of July. But by the end of that month, Wang had announced his retirement.

While there was plenty of glad-handing as Wang left the ship, since then Sokol has opened up about the damage that Wang inflicted on the company.

"If I have a criticism of the prior Seaspan team, it was had they had their balance sheet in order two years ago, they could have done a tremendous amount of purchasing of assets over the last 18 months at bargain prices," he told Bloomberg.

Recently Seaspan has been repairing that damage, recapitalizing its balance sheet with the help of a big-name investor. It's received cash infusions from Fairfax Holdings, which purchased $250 million in debentures in early 2018 and received warrants to purchase the stock at $6.50 per share, for another $500 million. Fairfax exercised half of the warrants in July and committed to exercising the other half in January 2019, years before they expired.  For the early exercise, Seaspan offered the insurance company another set of warrants to acquire 25 million shares at $8.05 per share.

The recapitalization was a bold move and showed that the well-regarded Prem Watsa, head of Fairfax, had confidence in Sokol. And then the clean-up really began.

The company said that paying down debt was a higher priority than increasing its dividend, a focus of prior management for many years. Shortly after Seaspan announced it was redeeming its Series F preferred stock paying a high 10.5% interest. Expect more debt paydown, perhaps more of the company's preferred stock, much of which yields around 8%.

So that's where Seaspan sits. The company generates a ton of cash – about $367 million in operating cash flow over the last four quarters -- and more of it is going to pay down debt. Its debt-to-EBITDA ratio sits at a high 8.3 times, so there's plenty of room for improvement. And industry fundamentals are poised to move in the right direction.

With the stock trading at a price to tangible book of 0.63, it looks like there's plenty of room for upside. Certainly, David Sokol thinks so. When he came aboard as chairman, he put up $6 million of his cash to buy one million shares at $6 per share. While the dividend – now at 5.4% -- won't grow much, investors should likely see capital gains.