Seaspan Corporation's (NYSE:ATCO) financial results have slowly started turning around in recent quarters thanks to the improvements in the container shipping market. And the company accelerated its rebound in the second quarter after completing a needle-moving acquisition. That deal, along with some recent financial arrangements, put the company in a stronger position to deliver improving financial results in the coming years. 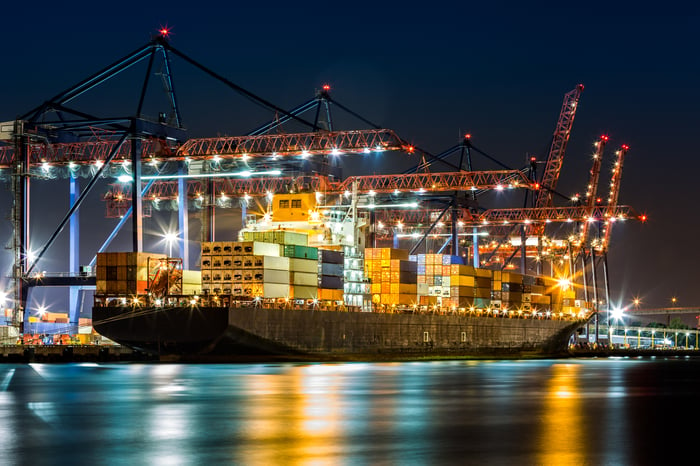 CEO Bing Chen commented on the company's progress during the quarter:

I am pleased with our strong operating results for the second quarter. As expected, the acquisition and seamless integration of GCI contributed significantly to our growth. In addition to the vessels acquired through GCI in the first quarter, we grew our operating fleet with the delivery of four 10,000 [20-foot equivalent unit] containerships on long-term fixed-rate charters with CMA CGM, and achieved a utilization rate of 98.6% for the quarter. We remain optimistic about improving industry dynamics for containerships.

As Chen noted, Seaspan's financial results improved dramatically during the second quarter thanks to the acquisition of GCI. Not only did the deal significantly boost Seaspan's fleet, but it also bolstered the company's revenue backlog. At the time of the transaction, GCI had $1.3 billion in contracted revenue, while Seaspan's backlog stood at $4.3 billion. Those contracts enhance Seaspan's ability to significantly increase earnings over the next year.

Seaspan's near-term focus is to use the cash proceeds from the Fairfax transactions as well as the excess cash generated from operations to improve its balance sheet, aiming for an upgrade to an investment-grade credit rating. That will give the company more financial flexibility to pursue additional strategic acquisitions and other growth initiatives in the coming years as it looks to be a consolidator in the containership sector.