Please ensure Javascript is enabled for purposes of website accessibility
Log In Help Join The Motley Fool
Free Article Join Over 1 Million Premium Members And Get More In-Depth Stock Guidance and Research
By Matthew DiLallo - May 3, 2018 at 11:31AM

The containership leasing company completed a needle-moving acquisition that should drive earnings much higher over the next year.

Seaspan Corporation (ATCO 3.00%) has spent the past couple of years working to turn around its financial results, which have been sinking due to weakness in the container shipping sector. Those efforts are starting to pay off and helped drive a double-digit year-over-year improvement in the company's revenue and earnings. Meanwhile, with it recently completing a game-changing acquisition, results should continue heading higher over the next year. 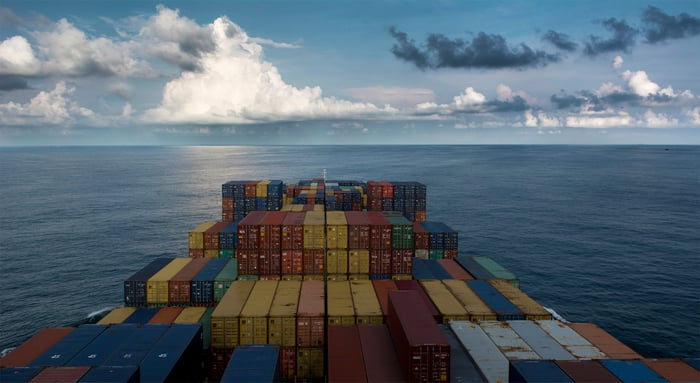 Seaspan is starting to turn things around:

CEO Bing Chen commented on the quarter, saying that "over the past few months, we have made significant progress across multiple areas within the Company." One of the most important was completing the acquisition of CGI because it "achieved a number of important strategic objectives for the company while being accretive to earnings per share." Chen pointed out that:

On the strategic side, the acquisition of GCI improved our fleet composition as we increased our exposure to larger, more modern containerships that are in demand by our customers. In addition, we expanded our relationships with our customers, significantly increasing our contracted future revenue and EBITDA. Finally, the GCI acquisition provided an opportunity for Seaspan to expand its partnership with Fairfax and other financing partners, reinforcing the strength of our integrated platform.

In the near-term, the CGI deal should boost earnings per share by at least 20% over the next year. That's in addition to the incremental income the company should earn from the newbuilds it has coming down the pipeline as well as the expectation that it can secure more favorable charter rates on vessels with contracts that expire this year due to the improvement in shipping rates. Meanwhile, the company is "actively seeking opportunities to grow our business," according to Chen, who noted that the company wants to be a consolidator in the fragmented containership industry.