Please ensure Javascript is enabled for purposes of website accessibility
Log In Help Join The Motley Fool
Free Article Join Over 1 Million Premium Members And Get More In-Depth Stock Guidance and Research
By Matthew DiLallo – Updated Feb 28, 2018 at 11:29AM

The containership leasing company is starting a new phase of its voyage in 2018.

Last year presented its share of challenges for Seaspan Corporation (ATCO 0.36%), which continued in the fourth quarter. While the company's revenue stopped sinking, profits haven't bottomed out just yet. However, after completing several strategic initiatives in the past year, the company believes it can return to delivering profitable growth in 2018. 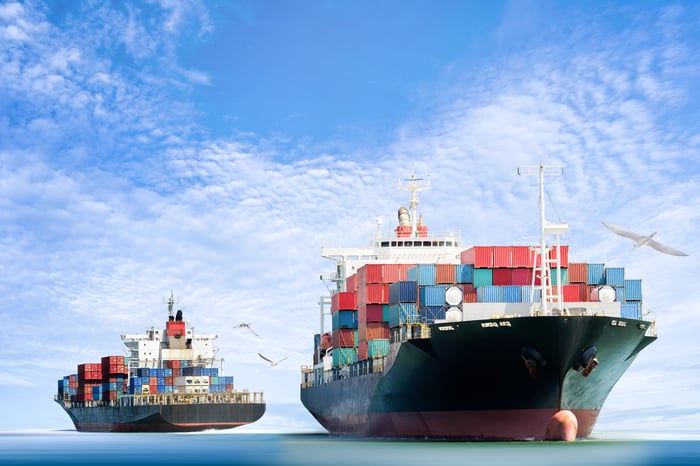 Board chairman David Sokol commented on the company's recent progress by saying:

2017 was an important and pivotal year for Seaspan. We continued to achieve strong operating results, maintain a sizable contracted revenue backlog, and grow our operating fleet on long-term time charters by taking delivery of five newbuildings with charters of 10 to 17 years. With a focus on driving shareholder value, we also took important steps to strengthen our corporate governance, deleverage our balance sheet, and increase our unencumbered asset base. We are pleased to have commenced 2018 with a $250 million investment by Prem Watsa-led Fairfax and the acquisition of two second-hand feeder vessels chartered to Maersk. Our transaction with Fairfax, as well as our success expanding our relationship with the world's largest liner company, underscores Seaspan's industry leadership and sharpened strategic focus.

While Seaspan's financial results haven't quite turned around due to the lingering effects of the downturn in the shipping sector, the company has still been working hard to shore up its operations and balance sheet. It completed several moves over the past year to raise capital that reduced debt and provided it with funding to acquire vessels that should eventually drive its financial result higher.

Seaspan began "the next phase of our voyage," according to Bing Chen, who took over as CEO last month. His "goal during this important phase is to leverage our integrated platform to create substantial franchise value" by ensuring its fleet, operating platform, customer focus, and financial strength are "among the best in the industry." The new CEO further noted that with market fundamentals improving, "we see a rich set of opportunities before us," that should enable the company to deliver accretive growth as it increases its industry-leading position.