The company is reassuring investors that a new investigation into its billing practices isn't a big deal.

What: News of a Justice Department investigation of billing practices at one of Alere's (NYSE: ALR) businesses sent the stock tumbling at the market's close yesterday, but it had rebounded by 21.5% at 2 p.m. EDT today. 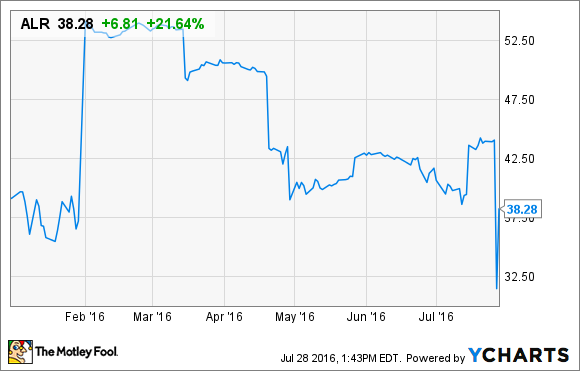 So what: Alere investors have been holding their collective breath awaiting the completion of Abbott Labs' (ABT 1.77%) proposed takeover of Alere. Earlier this year, Abbott Labs agreed to buy the testing company for $56 per share in cash.

Rumors that the deal could unravel surfaced in April, when accounting woes led to Abbott Labs' management offering up what many viewed as tepid support to go forward with its acquisition. The company reportedly recorded some revenue in Africa and China incorrectly and that's kept it from filing an annual report as well as first-quarter report with the Securities and Exchange Commission.

However, Alere's management said earlier this month that it was close to finalizing the review of its accounting practices and that it would soon bring its filings current. The company determined it had inappropriately recorded some sales that would require restating 2013, 2014, and 2015 financial results, but the restatements aren't expected to be material, according to the company.

That revelation helped dispel fear that Alere's merger is in jeopardy, but recent gains were quickly erased yesterday when news of the Justice Department investigation broke.

The DOJ has issued a subpoena to the company so that it can investigate its patient-billing records to determine whether Alere inappropriately provided illegal financial incentives to patients and doctors. Specifically, it is investigating whether Alere paid co-pays for patients covered by government insurance programs and if it paid physicians to direct patients toward their diagnostic tests.

Now what: Alere's management issued a statement last night that says the investigation relates to sales representing less than 1% of its total revenue through the first nine months of 2015. It also said that they don't believe the subpoena issues in question are material to its business. Those assurances appear to be restoring confidence among investors that Abbott Labs won't scuttle the deal on the DOJ news.

Abbott Labs has said that buying Alere will produce $500 million in annual savings per year by 2019 and that acquiring Alere will boost EPS by at least $0.12 next year. Those are pretty good incentives to staying the course. However, if Abbott Labs questions if its assumptions are based on incorrect data or that those assumptions could be changed by potential outcomes from this investigation, Abbott Labs could still opt to pay a break-up fee and walk away.

Overall, there are too many question marks associated with this company for me to want to own it in my portfolio. After all, there are plenty of other investment ideas to consider that don't have similar overhangs.