Please ensure Javascript is enabled for purposes of website accessibility
Log In Help Join The Motley Fool
Free Article Join Over 1 Million Premium Members And Get More In-Depth Stock Guidance and Research
By Rick Munarriz - Mar 3, 2021 at 11:55AM

It seems as if the universe will be epic after all. Comcast (CMCSA 0.98%) announced on Wednesday morning that work has resumed on the buildout of Epic Universe, the next-gen theme park that Universal Orlando was hoping to open in 2023 before the pandemic forced it into hibernation.

This is a pretty big deal because when work stopped on the project last summer there were no assurances that it would ever recommence. Comcast offered no timeline on resuming the development on Epic Universe at the time. A few months later a wave of layoffs included 373 salaried members of Universal's creative team, making it seem as if the pause in development could be permanent.

Thankfully for theme park fans everywhere, Epic Universe is back on the front burner. Too much time has probably been lost in the disruption for the original opening date in 2023 to be feasible, and Comcast isn't offering up a new target date. It's certainly possible that 2024 will mark the debut of Epic Universe, giving Disney's (DIS 2.28%) biggest rival three years to raise the bar. 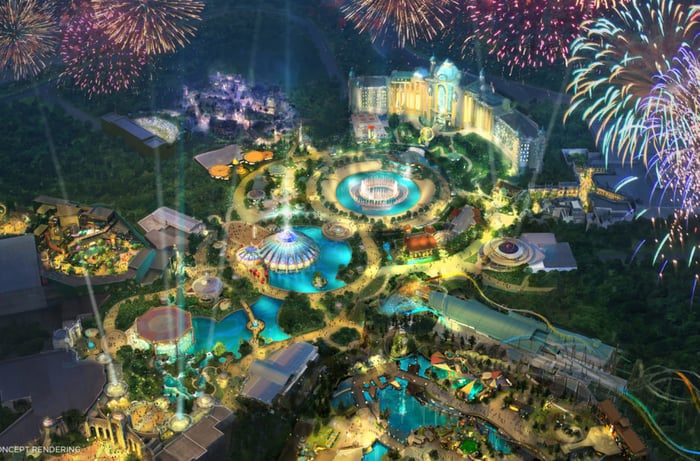 Epic Universe will anchor a 750-acre project featuring hotels, entertainment centers, and additional shopping and dining opportunities. It won't be located within the existing Universal Orlando resort. There's just no land there for that kind of ambitious undertaking. The new park will open a few miles away, in a plot of land that will roughly double Comcast's footprint in central Florida.

Keeping up with Mickey Mouse

This might seem like a lousy time for Comcast to be thinking about building out a theme park empire. Revenue for its theme park division plummeted 63% in its latest quarter, at a time when its original gated attraction in California remains closed and its other properties are operating at limited capacity.

Comcast doesn't have much of a choice. Disney is working on major attractions that will be part of an 18-month celebration of its Florida resort turning 50 in October. The House of Mouse will have to pause to catch its breath when the event is over in spring of 2023. It would've been great timing for Epic Universe to open in April of that year, just as the spotlight shifts away from Disney World. However, 2024 is better than nothing.

An extra year will also mean a greater likelihood of global travel being back to normal -- if not even better -- after the pandemic. Disney CEO Bob Chapek made comments earlier this week about unnamed changes coming to its theme parks that could help increase shareholder value. If Chapek's right about making its attractions a more lucrative segment of the media stock's empire, this will give Comcast the opportunity to either match Disney's ambitions or fill in any gaps if the changes alienate hardcore theme park fans. No matter what path Comcast takes, it could be an epic Epic Universe for Universal.