Please ensure Javascript is enabled for purposes of website accessibility
Log In Help Join The Motley Fool
Free Article Join Over 1 Million Premium Members And Get More In-Depth Stock Guidance and Research
By Rick Munarriz - Jan 29, 2021 at 8:35AM

Universal Studios is holding up better than you might think on the theme park front, and that's great news for its peers.

Comcast (CMCSA 2.68%) offered up its fourth-quarter results on Friday. Most investors will gravitate to the metrics that matter most to the market bellwether. How is the churn holding up for its flagship broadband connectivity and cable TV businesses? Is the nascent Peacock streaming service gaining any kind of traction now that it's the exclusive home to The Office?

As a theme park enthusiast and investor, I'm going to dive deeper into the Comcast report. The parent company of the Universal Studios theme parks reports its quarterly financial results a couple of weeks before Walt Disney (DIS 1.84%) and SeaWorld Entertainment (SEAS 4.89%). With all three companies operating popular theme park attractions in Florida and California, Comcast offers a glimpse of what its two rivals may bring to the table next month. If Disney and SeaWorld follow Comcast's lead, investors are going to be pretty happy. 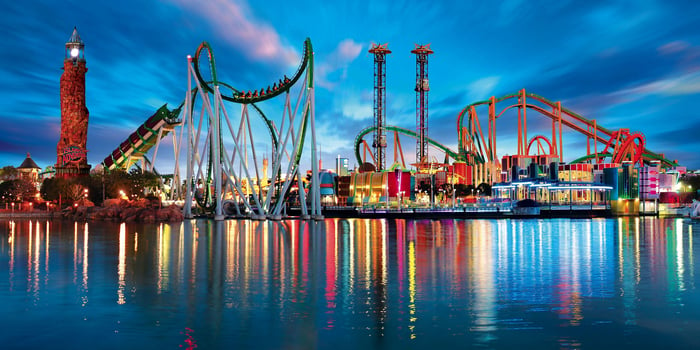 Comcast generated $579 million in revenue for its theme park segment in the fourth quarter, 63% below where it landed for the final three months of 2019. This is a lot better than it looks. A 63% year-over-year slide may seem rough, but this is with turnstiles at its original California park still locked. Universal resorts in Florida and Japan are also operating under sharply reduced but improving capacity levels. Travel restrictions have curbed tourism everywhere on the planet.

The real comparison here should be with the third quarter that Comcast posted back in November. It was the first period in which Universal Orlando and Universal Studios Japan were open for all three months. Revenue plummeted 81% at the time. The sequential improvement is substantial, and the news gets even better on the bottom line.

Adjusted EBITDA improved from a $203 million deficit in the third quarter of 2020 to just a $15 million hole in the fourth quarter. Even better, the quarter included the outlay of $45 million of pre-opening costs for the new theme park in Beijing, which is still on track to open this summer. Remove that line item, and Comcast's theme park segment was in the black on an adjusted EBITDA basis, even with Universal Studios Hollywood still shuttered.

Comcast isn't getting cocky. Costs will ramp up in the coming months as the grand opening of Universal Studios Beijing approaches. The company didn't even mention Epic Universe, the ambitious Orlando theme park that it originally hoped to open in 2023, but that is now on indefinite hold.

Chances seem good that Disney and SeaWorld will keep the encouraging reports coming in two and four weeks, respectively. Disney and Comcast both have kept their original theme parks in Southern California closed. SeaWorld might be faring even better, with SeaWorld San Antonio open and its original San Diego park partly open as a zoo until early December.

The near-term outlook remains murky, with COVID-19 case counts still mounting and travel restrictions tightening. However, the pace of vaccinations is starting to pick up across the country after a sloppy start. Spring break will be challenging, but summer will almost certainly be better than it was last year.