Though your Social Security benefits are calculated based on what you earned during your career, the age at which you first file for them can impact your ultimate payout. If you claim benefits at full retirement age (FRA), which, for today's workers, is 66, 67, or somewhere in between, you'll get the exact amount you're entitled to based on your earnings history. However, if you hold off past FRA, you'll boost your payments by 8% a year, up until age 70.

Now, on the one hand, that's a pretty good deal, because you're basically getting a risk-free 8% return on your money by waiting until age 70. On the other hand, filing for Social Security at 70 isn't always the right way to go. Here are a few reasons why it's actually silly to wait that long. 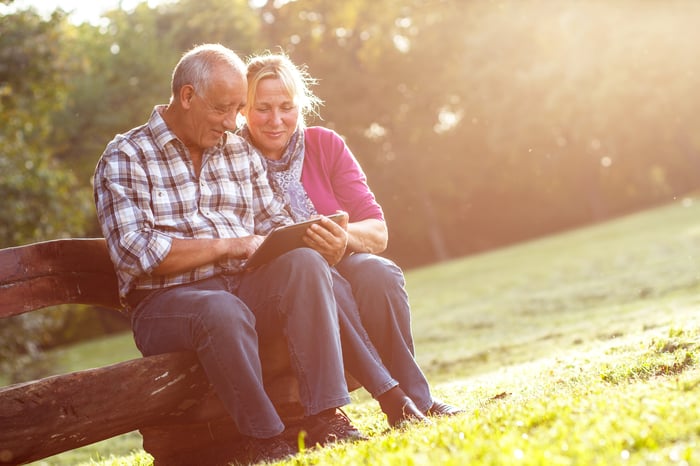 Filing for Social Security at 70 might seem like a good idea in theory, but one thing you may not realize is that 60% of workers are forced to retire earlier than planned. Why is this the case? For some folks, it's a matter of losing their jobs later in life and not managing to find new work. For others, it's a matter of failing health or needing to care for a loved one. No matter the specifics, you can't assume you'll get the choice to claim Social Security at 70, especially if your savings aren't adequate -- which is the case for most folks.

Furthermore, if you land in a situation where you're out of work and can't pay the bills, then you absolutely should not wait to file for benefits. Otherwise, you'll risk racking up costly credit card debt that'll be extremely difficult to shake later in life.

2. You may not come out ahead financially

The motivation to file for Social Security at 70 stems from the higher monthly payout you'll get by waiting that long. But while claiming benefits at 70 might give you more money each month, you might come away with less money over the course of your lifetime.

The reason? Social Security is designed to pay you roughly the same lifetime total regardless of whether you file at FRA or delay. The logic is that any boost in benefits you'll get by waiting is offset by the lower number of individual payments you'll collect. Now, if live an average life expectancy, you'll basically break even under either scenario -- meaning, you'll get the same lifetime payout whether you file at, say, 67 or 70. But if you pass away sooner than expected, you'll end up losing money by virtue of having waited on those benefits.

Here's how that scenario might play out in numbers. Imagine your FRA is 67, at which point you're entitled to a $1,500 monthly benefit. Waiting until age 70 to claim Social Security will raise that amount to $1,860, but you'll collect 36 fewer payments. If you live until age 82.5, you'll come away with the same total under both filing scenarios: $279,000. But if you pass away at age 80 -- which isn't particularly young -- you'll wind up losing out on nearly $11,000 in lifetime Social Security income by making the choice to file at 70.

3. You've earned the right to a longer retirement

Some seniors push themselves to hold off on Social Security as long as possible, and if your savings are on the low side, that's a smart move. But if you've accumulated enough money to cover your bills without Social Security, then waiting until 70 might mean missing out on a chance to retire sooner and enjoy some leisure time when you're younger and have more energy for it.

Imagine your nest egg contains just enough money for you to pay for all of your expenses except entertainment and travel. If you force yourself to wait until age 70 to file for benefits rather than file at 67, you'll lose out on three good years during which you could potentially be enjoying your life much more. While it's noble to be financially cautious and aim to get as much money as possible out of Social Security, there comes a point when you need to allow yourself to reap the rewards you're worked hard for. After all, you never know how long you'll live or when your health might deteriorate, so don't miss out on a key opportunity to make the most of those benefits.

Though taking Social Security at 70 does make sense in some scenarios, it often pays to file sooner for the reasons detailed above. Remember, you've earned those benefits, so you might as well claim them at a time when they'll be the most useful to you.