When we think about retirement, we often operate under the assumption that leaving the workforce will be a matter of choice. But the reality is that many seniors wind up retiring earlier than anticipated. In fact, a good 60% of workers are forced into early retirement, according to data from Voya Financial, and the reasons run the gamut from job loss to personal health issues.

If you land in a situation where you have no choice but to retire sooner than expected, don't panic. At the same time, take these essential steps to preserve your finances in the face of that unplanned blow. 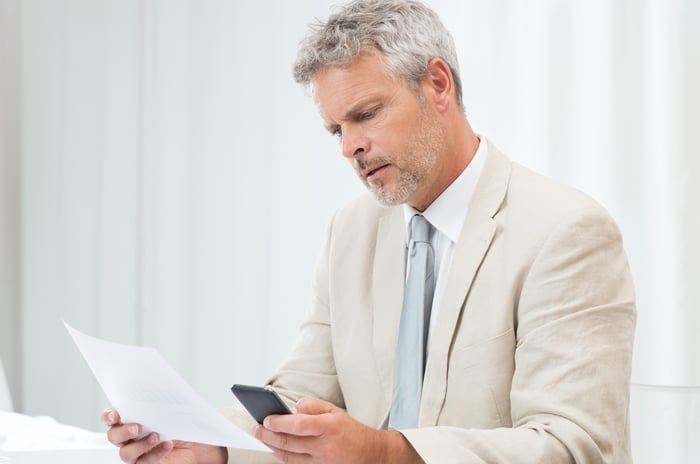 As a general rule, it's a good idea to have about 10 times your ending salary saved for retirement, and while there's certainly some wiggle room there, it's safe to say that if you have $160,000 in your 401(k) but were making $80,000 a year, you're clearly not in good shape. If that's the case, then you'll need to get creative about generating income to compensate (more on that in a bit).

On the other hand, if your savings balance is reasonably close to that target, you can start to breathe a sigh of relief -- but don't make plans to spend all of that money just yet. The aforementioned formula assumes an average-length retirement, but if you're forced out of a job at, say, age 58, you'll probably be looking at a longer retirement than someone who works until age 63. And that means you'll need to be more conservative with your yearly savings withdrawals.

2. See if Social Security is an option

Most seniors are advised to wait until full retirement age to collect Social Security because filing earlier will cause their benefits to get slashed. But if you're forced to retire sooner than expected and need the money, it absolutely pays to see if you can start collecting that cash. You're allowed to file for benefits as long as you've acquired enough working credits in your lifetime (40) and have reached age 62. And while you will lose out on a portion of your benefits by claiming them at that age, it's a far better bet than relying on credit cards to pay your bills in the absence of a full-time paycheck.

Maybe you spent your money a certain way while you had a steady paycheck, but if you're suddenly without an income, you'll most likely need to start scaling back on your expenses. So, take a look at your current budget and figure out which expenses you can instantly slash until you're able to regroup financially, whether it's your cable package, your car payments (you may not need a vehicle if you're no longer working), or even your home (if you're a renter on a month-to-month lease, it could be an option).

4. Make sure you have medical coverage

Seniors generally rely on Medicare to cover their healthcare needs in retirement. But that coverage doesn't kick in until age 65, so if you're forced to retire before that point, you'll need to secure some type of insurance. If you had a plan through your former employer, COBRA allows you to maintain that coverage, provided you're willing to pay for it in full. Keep in mind that the amount you paid while employed may not have been the full cost of your plan; there's a good chance your employer subsidized that premium heavily, in which case you may come to find COBRA prohibitively expensive. If that's the case, then you have the option to shop for insurance on the open market. Just make sure to have some coverage in place; otherwise, you'll really be opening yourself up to financial catastrophe.

5. Don't give up on working completely

Just because you're no longer able to work at your old full-time job doesn't mean you can't work in some capacity at present. If you were forced into early retirement, why not take the opportunity to do something you've always wanted to try? Running your own business is a great way to generate income to make up for your absent paycheck, and if you can't swing a full-time gig, you can have a go at it part-time. Having that additional money will not only offset the financial blow of early retirement, but will possibly help you avoid taking Social Security earlier than necessary, thus preserving that income stream as well.

In an ideal world, we'd all get to retire on our own terms. But clearly, not everyone gets that choice. If you're forced to retire sooner than planned, don't despair. You may need to reset some financial expectations, but ultimately, there's a good chance you'll recover just fine.