How's that for good news?

But just recently, Fidelity had better news to share -- namely, that retirement plans seem to have rebounded nicely across the board. As of the end of 2020's second quarter, the average 401(k) balance reached $104,400, a 14% increase from the year's first quarter. IRAs came up as well, averaging $111,500 at the end of 2020's second quarter and representing a 13% increase from the previous quarter.

Given the way the stock market as a whole has rebounded despite the pandemic and ongoing recession, these numbers make a lot of sense. But it still pays to take the following steps, even if your balance has recovered nicely since it fell earlier in the year. 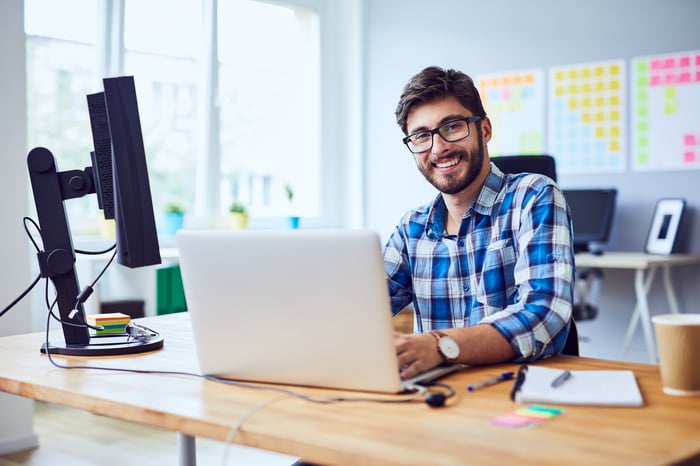 If you're still working and collecting the same paycheck you did before the pandemic, then it pays to continue funding your 401(k) or IRA. In fact, you may have an opportunity to contribute even more than usual. Though many people are struggling financially during the ongoing crisis, others are actually managing to save money by virtue of not having to commute, not taking vacations, and not seeking much entertainment outside the home. If you're in the latter camp, it pays to increase your retirement savings rate if you can. This year, you can put up to $19,500 into a 401(k) if you're under 50, or up to $26,000 if you're 50 or older. If you have an IRA, you can contribute up to $6,000 if you're under the age of 50, or up to $7,000 if you're 50 or over.

It's important to set up your retirement plan in a manner that allows it to generate growth without exposing you to undue risk. If you're within a few years of retirement, you'll want a nice chunk of your retirement plan assets in bonds. If you're younger, it pays to go heavier on stock investments. Make sure your 401(k) or IRA is invested appropriately, and if it's not, now's the time to shift your allocations around -- while plan values are back up.

3. Brace for another decline

Right now, retirement plan balances are back up -- but they may not stay that way. If the stock market crashes again this year, which is a distinct possibility, then we could see 401(k)s and IRAs tumble even more than they did earlier in the year. If that happens, the key is to not panic, especially if retirement is still several years away. Stocks tend to be very reactive, and bad news on the pandemic front could cause rapid declines. But retirement plans recovered fairly quickly from the last market crash, and could do so again.

Still, though retirement plan balances are back up, we're not out of the woods as far as our current recession goes. Be mindful of that as you make financial decisions in the coming weeks or months.