Please ensure Javascript is enabled for purposes of website accessibility
Free Article Join Over 1 Million Premium Members And Get More In-Depth Stock Guidance and Research
By Maurie Backman - Dec 14, 2020 at 7:18AM

If you're in the dark, it's time to get schooled.

Taxes are a part of life, and being informed about them can help you better manage your money. But new data reveals that Americans are missing one key piece of tax information -- the amount of money that's withheld from their paychecks.

A good 45% of workers don't know how much tax they're signed up to have withheld, reports the American Institute of CPAs. But the wrong withholding amount could result in an overly large tax refund, and while that may seem like a good thing, it's actually anything but. 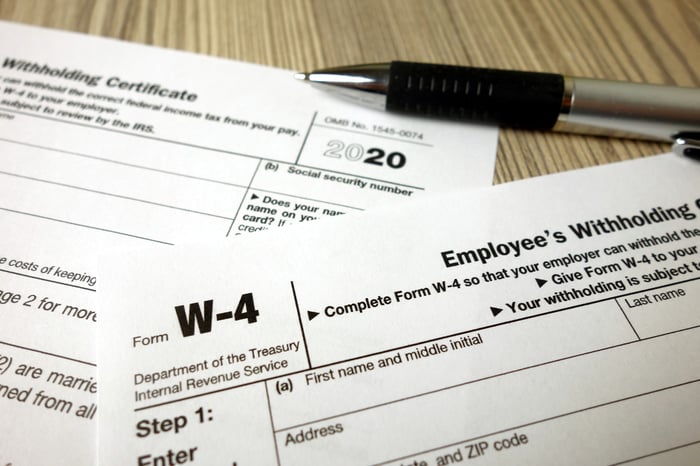 Why you must pay attention to your withholding

It's easy to think of a tax refund as free money, but in reality, it's your money -- money you were entitled to week after week that you instead let the government hang onto interest-free. Your goal as a taxpayer should be to break even when you file each year's return so that you don't owe the IRS money, but the agency also doesn't owe you any. Rarely do things work out perfectly, though, and the majority of people who file a tax return wind up with a refund after the fact. But if money is tight, a boosted paycheck could actually serve as a lifeline -- and you may be entitled to one without even realizing it.

This especially holds true during the pandemic. Many people have seen their finances take a hit over the past nine months, and getting a higher paycheck by having less tax withheld could spell the difference between covering your bills in the near term and racking up expensive debt that damages your credit score.

That's why if you're in the dark about your tax withholding, it's a good idea to dig up your W-4, find out how many allowances you're claiming, and see if you can claim more. The more you claim, the less tax you'll have withheld from your earnings.

Of course, you don't want to claim too many allowances and severely underpay your taxes, either. Doing so could result in penalties, not to mention put you in a position where tax season comes along and you can't pay the IRS what you owe. But if you've consistently been getting large refunds year after year but have also been struggling with monthly bills, then it pays to make changes to your withholding, especially with a new year approaching.

Get what's rightfully yours

The IRS has issued over 125 million refunds for the 2019 tax year, with the average refund amounting to $2,535. Now, imagine you just got a similar refund. That means you could've had an extra $211 a month in your paychecks all along, and that's money that may have prevented you from taking on debt, or even just stressing out about feeling financially squeezed. That's why now's a great time to review your W-4 and adjust it as necessary. Given the general economic uncertainty the country on a whole is facing going into 2021, having extra money in your paychecks -- money you're entitled to -- certainly wouldn't hurt.