Hey, Reader: Don't get confused! This article's about 2020 taxes, which you won't have to file until 2021. For 2019 tax planning, check out this guide. And if you're looking for more info on filing your taxes -- including the recently changed filing deadline -- check out this article.

2020 could be a momentous year for many reasons. But if you're trying to do tax planning for 2020, it doesn't look like this year is going to bring much in the way of massive changes to tax laws. No matter what happens in the 2020 elections, any changes in the White House or control of Congress won't take effect until 2021, and so this year is likely to continue the gridlock that has kept current tax laws largely unchanged since 2018's tax reform efforts.

Even without major tax law changes, every year brings a host of smaller amendments to existing provisions. They include the following:

Let's take a more comprehensive look at all of these tax issues to help you create a better tax plan for 2020.

Tax brackets define what percentage of your income you have to pay in tax. Under our progressive tax system, the more money someone makes, the higher the percentage of tax owed on each extra dollar of income -- also known as the marginal tax rate. 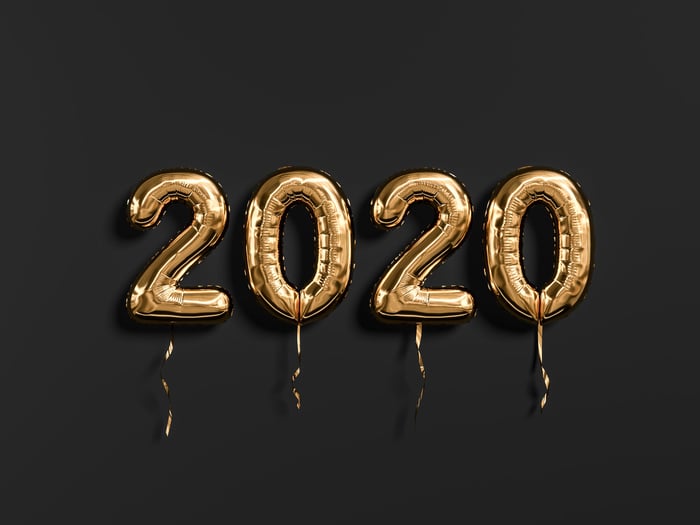 However, you don't pay the marginal tax rate from your top tax bracket on every dollar you earn. Instead, you receive the benefit of lower tax rates for certain parts of your income, in a graduated manner.

The only changes to the income tax brackets for 2020 reflected the usual yearly inflation adjustments to the income amounts for each bracket. Apart from that, you can expect the same basic structure as 2019, with the same seven tax rates applying to the various brackets. The actual income amounts of the brackets depend on your tax filing status. Accordingly, you'll see five sets of 2019 tax brackets below.

If you file as a single taxpayer, the following brackets apply:

Those who qualify as head of household have higher income thresholds apply to each tax bracket, resulting in lower tax. To qualify as a head of household, the requirements include that you be unmarried and provide both housing and financial support for a child, parent, or other relative who lives with you for greater than half of the year. The financial support you provide must generally be more than half of all support the child or other relative received during the year.

Most married taxpayers file jointly. If you were married but your spouse passed away recently, then you're also allowed to use these brackets as a surviving spouse.

Some married taxpayers choose to file separate returns. These are the brackets that apply.

Finally, there are some trusts that get taxed as separate legal entities. The same is true of estates of someone who passes away. These brackets are also important for those whose children have enough unearned income to be subject to the kiddie tax.

Investors enjoy a tax break on certain types of investment income. Dividends that certain stocks pay qualify for lower tax rates, as do the profits on investments that you sell after having held them for longer than a year. These qualified dividends and long-term capital gains are eligible to get taxed at 0%, 15%, or 20%, producing substantial savings.

A separate set of brackets applies to determine the maximum tax rate on qualified dividends and long-term capital gains, as seen below.

To take advantage of these lower rates, taxpayers should ensure that they meet the requirements for qualified dividend income and long-term capital gains. Most dividends that U.S. stocks pay qualifies, but any dividends that don't qualify get taxed at higher ordinary income tax rates. Selling an investment you've held for a year or less makes any gain short-term rather than long-term, and short-term capital gains also get taxed at ordinary tax rates. If you pick good dividend stocks and hold your investments for the long run, the tax laws reward you with lower rates.

What is the standard deduction for 2020?

The vast majority of taxpayers take the standard deduction. The current amounts are high enough that only a few taxpayers get enough extra benefit to justify itemizing their deductions instead.

Annual inflation adjustments brought a modest rise in standard deductions for 2020, as seen below.

In addition to these base amounts, those who are 65 or older or are blind get to take additional amounts as a standard deduction. For those who are married, the added amount is $1,300, while singles get to add $1,650. These added amounts are the same for 2020 as they were in 2019. If you're 65 or older and blind, then you can boost your standard deduction by double the relevant amount. Moreover, for joint filers, each spouse has an opportunity to get these added amounts. So married couples in which both spouses are over 65 and are blind would see their standard deduction increase by $5,200 -- or $1,300 times four.

What are the most popular tax credits for 2020?

Tax credits are extremely valuable breaks for taxpayers. Credits lead to a greater reduction in tax than deductions because they are directly applied to your tax bill in a dollar-for-dollar manner. For instance, a $1,000 credit would cut your tax bill by $1,000, but a $1,000 deduction would reduce your taxes by less than $1,000 -- more specifically, typically somewhere between $100 and $370 under current tax law. In particular, the following tax credits are among the most common and can produce significant savings.

A special thing about the earned income tax credit is that even if you don't owe anything in taxes, you can still get the credit amount back from the IRS in the form of a refund. As you can imagine from the chart, a credit of several thousand dollars for workers earning less than $56,000 -- in some cases, much less -- can make a big financial difference for families struggling to make ends meet.

The child tax credit is a simple provision, paying $2,000 for each eligible child. To qualify, children must be 16 or younger at the end of the tax year, and the person claiming the credit must live with the child for more than half the year and provide at least half of the child's financial support. Also, to get the full credit, your income must be no greater than the amounts below.

If you make more than these thresholds, then you'll lose $50 in credits for every $1,000 you make above the relevant income amount.

Meanwhile, the Lifetime Learning tax credit offers additional educational tax breaks even beyond traditional college. A 20% credit on up to $10,000 in eligible expenses every year is available to taxpayers making less than $59,000 if they're single or $118,000 if they're filing jointly, with reduced credits available up to $69,000 in income for singles and $138,000 for joint filers. This credit is available for graduate school, vocational training, and certain other nontraditional educational expenses.

Finally, the Saver's tax credit pays as much as $1,000 per person to encourage retirement contributions. Depending on your income, you can get a credit for 10%, 20%, or 50% of up to $2,000 in contributions to an IRA, 401(k), or similar retirement account. The following income limitations apply.

No credit is available above those top amounts, showing that the Saver's credit is generally intended for low- to middle-income taxpayers.

What are the most popular tax deductions for 2020?

Deductions aren't as valuable as tax credits, because they don't produce dollar-for-dollar reductions in tax.

For every $1 you're allowed to deduct from taxable income, you'll save a percentage equal to your marginal tax rate. So if you're in the 24% tax bracket, then a $1 deduction will save you $0.24 in tax. Yet even though those amounts are smaller than what you get from a tax credit, deductions are nothing to sneeze at.

These are the most popular deductions for 2020:

Managing retirement accounts is an important part of tax planning. Not only do some retirement plan contributions earn you valuable deductions right now, but you also get a chance to put off paying taxes on the income produced by your retirement savings for years until you take money out in retirement.

Each year, the contribution amounts and income limitations change on IRAs, 401(k)s, and other retirement plans. It's critical to keep up to date on these annual changes in order to make the most of these valuable tax benefits. If you miss an annual change, then you might save less than you could have.

There are two different types of IRAs -- traditional and Roth -- and different income-related limits apply to each. For Roth IRAs, contributions are prohibited if you make more than a certain amount of income, and the maximum contribution amount is reduced if your income falls into the phaseout range in the chart below.

Some employers offer different alternatives for workers. For instance, the SIMPLE IRA is easier to administer than a 401(k), making it a popular choice among small businesses. Yet employees can still set aside substantial amounts in a SIMPLE IRA -- up to $13,500 if you're younger than 50 or $16,500 if your 50 or older in 2020. Those numbers are up $500 from last year.

What other tax-favored accounts are available in 2020?

Beyond retirement savings vehicles, there are other tax-favored accounts you can use to save for your financial future, including the following:

Finally, a few aspects of gift and estate tax planning will see some changes in 2019. The federal estate tax lifetime exclusion amount will rise to $11.58 million in 2020, up from $11.4 million in 2019. However, annual gift tax exclusion amounts of $15,000 remain in place and unchanged for 2020, and the traditional exemptions from gift and estate tax -- including transfers to spouses and charities as well as amounts paid toward educational or medical costs -- are also still available.

Get your tax planning done right in 2020

As long as this guide might seem, it still only scratches the surface of some of the most important tax issues for taxpayers. For example, if you're self-employed or own a business, then there are many other issues to consider. That's a topic that would take its own guide to cover, and there are several situations that deserve similar planning considerations.

No matter how complicated or simple your personal situation is, it's never too early to think about tax planning for the coming year. By getting an early start on the 2020 tax year and using and referring to this guide to 2020 taxes throughout the year, you'll be in much better shape to take advantage of all the favorable provisions that can result in a lower tax bill this year and beyond.