Parents want to provide for their children's financial needs, and setting aside money in an investment account can be a great way to get kids off to a good start with their finances. How you set up an account for a child can have big tax implications, though. If you just move forward without thinking about the consequences, you can get a surprise at tax time.

One particularly confusing situation can come up when parents put money in custodial accounts for their children. In this case, a provision called the kiddie tax can apply to the investment income that those custodial accounts generate. The general idea behind the kiddie tax is to prevent parents from using their children as tax shelters, but there can actually be opportunities to save on taxes while staying within the provision's rules. 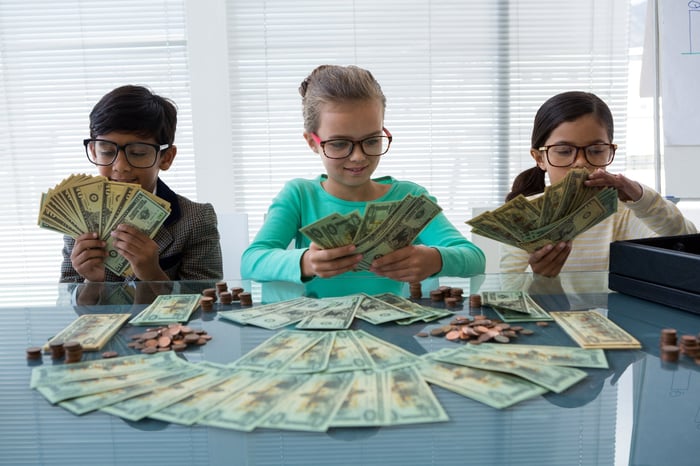 Why is there a kiddie tax?

Without a kiddie tax provision, families could use a strategy to put assets into their children's names and take advantage of their lower tax brackets to pay less tax. For instance, parents currently in the 32% tax bracket would pay $320 in tax for every $1,000 in investment income their assets generated. However, children with little or no income would typically be in a much lower tax bracket. A 10% bracket would leave the kids paying just $100 on the same amount of income, and in some cases, children would earn so little that they wouldn't have any tax liability at all from the investments.

The kiddie tax tried to take away this incentive. In its original form, the provision allowed children to earn up to a certain amount of investment income and pay tax on it at their own, typically low tax rates. However, above a threshold, the parents' tax rate would apply to the children's income. This all-family approach took away much of the incentive for tax planning using asset shifting across family members.

How the kiddie tax works now

Starting with the 2018 tax year, the kiddie tax rules changed from their original incarnation. Rather than using the parents' tax rates on investment income above a certain threshold, the kiddie tax now uses the tax rates for trusts and estates.

Based on the tables above, if you're a parent, you'll be able to compare whether your own tax rates are higher than what's listed above. In general, it won't do much good to transfer too much of your income-producing assets to your kids for tax purposes, and it's possible that you could end up paying more in tax if you're not paying the top tax rate on your own return.

Keep in mind that investing in your child's name has other implications. Once you put money in a custodial account, you've completed a gift to your child. You can't just take the money back later on. If you do, then the IRS could allege that the whole thing was just a ploy to avoid taxes.

That said, the kiddie tax still has some opportunities for families to produce some tax savings. If you already have accounts in your kids' names, then be sure to look at what impact the kiddie tax will have on your 2019 return.