Please ensure Javascript is enabled for purposes of website accessibility
Log In Help Join The Motley Fool
Free Article Join Over 1 Million Premium Members And Get More In-Depth Stock Guidance and Research
By Maurie Backman - Oct 19, 2017 at 7:32AM

New data reveals that the typical American could be making $7,500 more each year. Here's how to snag that much-needed cash.

We all want to earn as much from our jobs as possible, but just-released data suggests that the typical American worker is settling for much less than he or she might otherwise command. New pay data from Glassdoor reveals that the average U.S. employee could be earning over $7.500 more per year than his or her current salary.

Let's let that sink in for a minute. Most of us could be earning a good $600 extra per month based on our current job titles and level of skill. Clearly, that's a lot of cash to forgo. The question is: Why aren't we fighting for it? 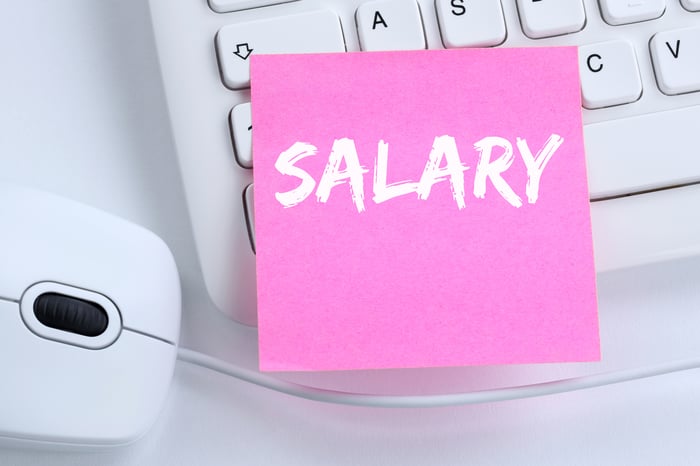 Why we're so underpaid

The fact that countless Americans could be boosting their salaries, but aren't, boils down to two reasons: lack of knowledge, and fear.

Many of us accept lower salaries than necessary because we don't do our research and learn what the going rates are in our respective industries. And for of us who are aware of how much we should be demanding, we're surprisingly scared to speak up. In fact, an estimated 60% of Americans accept job offers without negotiating their salaries first. Not shockingly, women are more likely to settle than men, with 68% of female employees failing to negotiate, compared to just 52% of male workers.

But there is some good news in all of this, and it's that there's an easy fix for those of us who want to see our salaries increase. All we need to do is conduct some research and hone our negotiation tactics.

Know what you're worth

It's easy enough to accept a salary offer that seems reasonable in theory, but the more research you do, the better equipped you'll be to determine whether that number is actually fair. You can start by using Glassdoor's "Know Your Worth" tool, which lets you plug in details such as your job title and location and see what others in comparable situations are making. Remember, even if you're doing the same job as someone else across the country, salaries can fluctuate based on geographic region. And it stands to reason that someone living in a larger city can demand a higher number to keep pace with the local cost of living. So as you do your research, try to focus on true apples-to-apples comparisons.

You can also try searching for your job online and seeing what salary ranges pop up. This may not give you quite as accurate a rundown, but it'll help you determine whether your salary is on the low end or the high end for your area. You can also try talking to recruiters and seeing what intel they can provide, since most are pretty in tune with the local market.

Don't be afraid to negotiate

Whether you're contemplating a job offer or are already employed, once you come to learn that you do have the potential to earn more, it pays to state your case rather than settle. Remember, when you accept a salary that's lower than what you could be making, you don't just lose out on money in the present. Rather, you risk shortchanging yourself throughout your career, since your future earnings will likely build off your current compensation.

So how do you go about the negotiation process? It depends on your situation. If you're staring at a job offer, present your prospective employer with the data you've gathered and let it speak for itself. Highlight key strengths you bring to the table, and make it clear that while you'd like to accept, you need to make sure you're being paid fairly.

If you're already working, you can take a similar but more targeted approach when negotiating a raise. Namely, present the research you've collected, but also highlight your key accomplishments on the job. For example, if the marketing campaign you spearheaded brought in 20% more new customers than any other initiative to date, say that. It'll remind your employer that you bring a certain level of value and skill to the table, and that losing you could be very bad for business.

Finally, whether you're considering a new position or are already working, be prepared to move on if necessary. Though money isn't everything in the grand scheme of job satisfaction, it's essential to your personal happiness and well-being. And if you're not being offered enough of it, you may need to take your business elsewhere.