Despite the recent Brexit scare, oil prices have slowly been finding their footing after close to two years of declines. The end of oil's gloomy days may not be completely behind us, but investors are starting to see better days ahead and are starting to look again at oil and gas stocks. The integrated oil and gas companies -- aka Big Oil -- have been one of the places that many have flocked to because their business models of having assets in every aspect of the oil and gas business mean more stable earnings through the cycle.

So let's take a look at three Big Oil companies -- Total (NYSE:TTE), ExxonMobil (NYSE:XOM), and Royal Dutch Shell (NYSE:RDS.A) (NYSE:RDS.B) -- to determine whether buying their stocks today is a bargain because of the current oil and gas market or if you are better off looking elsewhere.

Total has been an interesting company to follow over the past year or so. It has never received the same recognition like its integrated oil and gas peers here in the US. Like the scrappy underdog in a fight, though, the company has run circles around its peers over the past year in terms of preserving profitability during the downturn. Much of that has to do with some well placed investments in lower cost sources of production as well as wrapping up several capital intense projects in 2015. Another reason is that management removed more than $1.5 billion from its operational expenses and plans to remove another $0.9 billion in 2016.

Things are really looking up for Total over the next couple years and beyond, which makes the company's stock price the most surprising of the Big Oil companies. With shares trading at 1.3 times tangible book value -- a better metric to value cyclical companies than earnings based multiples -- and a dividend yield north of 6%, shares of Total look to be rather cheap.

Verdict: Of the Big Oil companies, shares of Total appear to be the best value. Its strategy and execution as of late give the company a positive, more certain outlook, and its shares are trading at a modest valuation.

For decades, ExxonMobil has proven itself the best of the Big Oil bunch when it comes to generating returns for shareholders over the long term. The company's stock has benefited over the years from an integrated business model that generates cash flow through the ups and downs of the oil and gas market, and a management team that has had the foresight to invest through the ups and downs of the market as well as reward shareholders with a consistently growing dividend and a reduced share count. 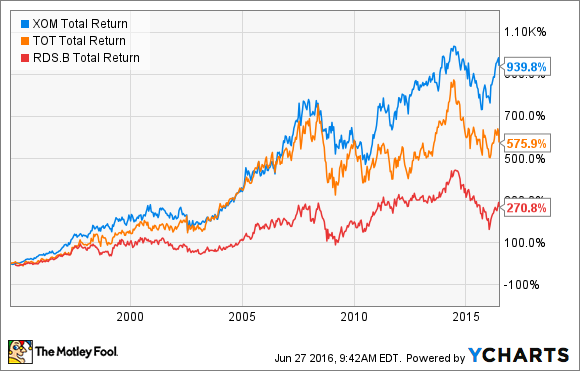 For all of the benefits that shareholders of ExxonMobil have seen over the past couple decades, there is one drawback for those looking to become part of the club: Shares aren't cheap, nor are they ever, really. During the recent downturn in the energy industry, shares of ExxonMobil probably reached their least expensive levels in a long, long time with a price to tangible book value of 1.6 times. Today, shares are trading at a more moderate 2.1 times tangible book value -- although the massive amount of repurchased shares over the years do skew that figure.

Verdict: Compared to its peers, shares of ExxonMobil are -- and will always be -- a bit more expensive. That's because you are buying what has historically been a better performer that has so far been worth the premium.

Of the three companies, Shell looks by far the cheapest stock on the surface. The company's shares are trading at par or close to the company's tangible book value, and its dividend yield is a juicy 7.3% today. When a company's shares are that much less expensive than the others, there is probably a reason. In the case of Shell, it's because the company hasn't performed as well in generating returns on its invested capital. If the capital put into the company is generating lower returns, then its stock is going to be valued less. Plain and simple 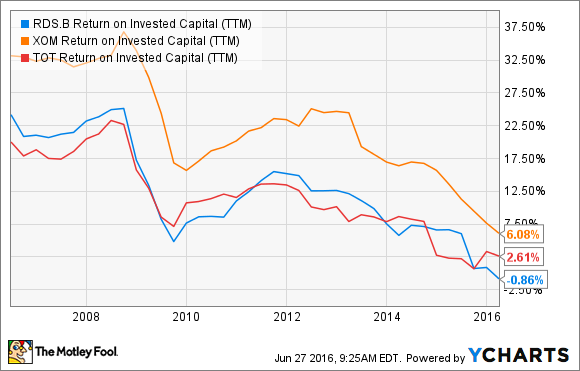 The case that the company might be a bargain today rests in its recent acquisition of BG Group. The combined company is by far the largest producer of Liquefied Natural Gas among the integrated majors, BG's offshore assets compliment Shells' existing portfolio, and the strength in these two areas will allow the company to shed many other disparate assets to focus on a smaller set of core competencies.

The plan that Shell's management has laid out appears to be one that should work to return the company to respectable levels of profitability. If it does work, then shares today look like a bargain. If the company stumbles in any way -- LNG and offshore production are two of the higher cost sources of oil and gas after all -- then perhaps they look cheap today for a reason.

Verdict: Probably the best approach when it comes to Shell is wait and see until we at least get to see a couple of quarterly earnings reports as a combined company before making any rash decisions.