Profits declined 40% compared to this time last year, but Total's underlying numbers hint at a company that will do very well once oil and gas prices increase again.

There are few integrated oil and gas companies that are working as hard as Total SA (TTE 0.07%) to get their cost structures under control. For the past few quarters, the company has steadily outpaced its peers in maintaining profitability levels, and based on the results so far, it looks like Total will keep this crown through 2016. Let's take a quick dive into Total's numbers for the quarter and see what the company is doing to stay ahead of its big oil peers.

As expected from the decline in realized prices, upstream production was the largest contributor to the decline in earnings, while its other segments pretty much held serve. One thing to consider, though, is that despite such a low realized oil and gas price, Total was able to still eke out a profit from that side of its business. Compare that to BP's most recently quarter results, which showed the primary thing the upstream part of its business is producing is losses in the billion-dollar range. 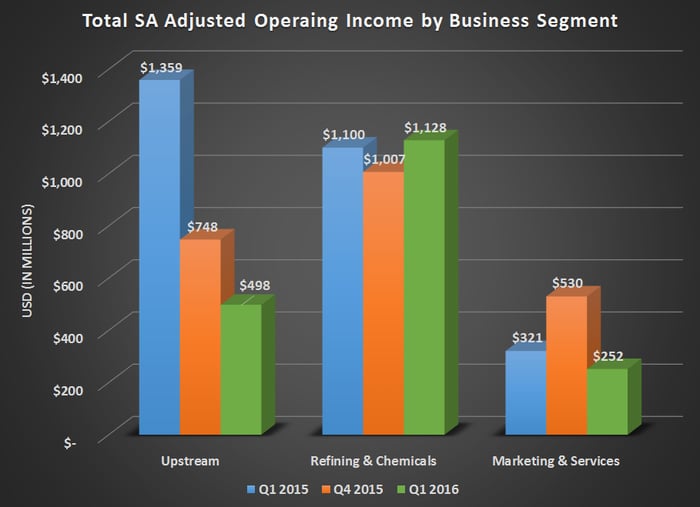 The one number from the report that probably jumps out the most is the decline in cash flow from operations. That drop is in part due to a large build in working capital. Excluding working capital changes, cash flow operations from the quarter would have been $3.7 billion. The 20% decline that number reflects is considerably smaller than the 40% decline in earnings per share. At a time where oil and gas companies are starved for liquidity, it's good to see cash flow declining at a slower rate than earnings.

What happened at Total this past quarter

What management had to say
The oil and gas industry has had a rough go of it lately, but Total's earnings have held up well compared to its peers, CEO Patrick Pouyanne's recent statements  reflect a company that has managed rather well during the downturn, and one that is continuing to cut costs, remaining one of the more profitable companies in its space throughout this cycle:

Despite a 37% fall in the Brent price to 34 $/b since the first quarter 2015, the Group's adjusted net income was $1.6 billion. Operating cash flow before workfing capital changes was $3.7 billion, a decrease limited to 20% due to the resilience of our integrated model...

Looking forward
Total's refining & chemicals and marketing & services businesses have looked  strong in recent quarters, but Total won't see a return to larger profits until we see a decent uptick in oil and gas prices. That the company's upstream segment has remained modestly profitable is a testament to its cost-cutting efforts; in the coming quarters, it's worth watching to see if it can eke out slightly better profits, even with these low oil prices. If it can, then when the market for oil does turn, expect Total to be in very good shape.

10-second takeaway
It would be easy to look at the 40% decline in earnings and say that Total is suffering in this market just like everyone else. If you look beyond the numbers for a second, though, you can see a company that is still generating profits from oil and gas production despite very low prices and a weak environment for refining and chemicals. These are signs that the company is in a much better place than when we started this oil decline, and could be one of the better investments in the oil patch today.