I'm guessing the management team at Total (NYSE:TTE) is passing around high-fives after the company posted yet another quarter of industry-defying operational results. The headline number many will point to is the 60% decline in net income, which was even weaker than BP's (NYSE:BP) quarterly result. Below some of those numbers, though, is a company doing an incredible job of remaining profitable in the midst of industry woes that have sent share prices of the industry stalwarts plunging. 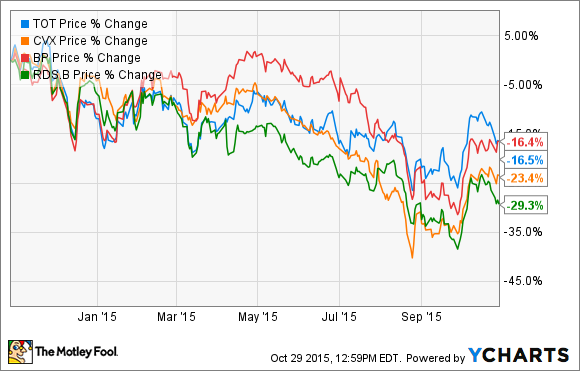 Let's take a quick look at the company's results and explore why Total may have positioned itself as the top-performing integrated oil and gas company for a while.

Digging into the numbers
Total's net income for the third quarter was $1.08 billion, a 69% decrease from the same time last year. However, those numbers are skewed by the fact that the company assessed several charges to the income statement to write down some of its assets. If we take out all of these charges, net income for the quarter was $2.8 billion; only a 23% decline in profits from last year. That's pretty impressive considering oil and gas prices have declined more than 50% over that time frame.

Here's how Total's earnings broke down by its business segments: 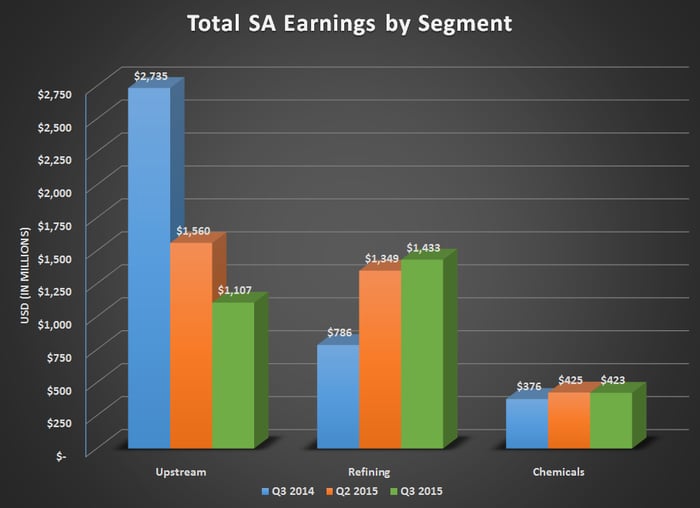 Like last quarter, Total's refining sector continues to post record results to help boost overall profitability. So much of this performance can be attributed to a very favorable refining market. This past quarter's European Refining Margin Indicator -- a proxy for gross margins -- was the highest it has been in over a decade.

What can't be discounted, though, is the fact that Total has been able to mitigate losses from its upstream production. The combination of starting up several major projects this year as well as the addition of the concessionary contract with the Abu Dhabi Company for Onshore Petroleum have given production a major profitability boost compared to its peers on a year-over-year basis.

On top of that new production coming online, the company is also doing a commendable job of cutting costs. Accoirding to management, it is already a head of schedule in removing $1.2 billion from its operational cost structure. Combined, these moves are helping Total post some pretty impressive results, all things considered.

The question that starts to arise, though, is whether all of the cuts to capital spending today will result in a lack of attractive projects several years down the road. Typically, exploration budgets are some of the first to get cut in the downturn, and if the company doesn't continue assessment of its suite of potenital wells, that next phase of development may not be as robust at the one we have for the next couple years.

What a Fool believes
Total has timed the start-up of its major projects almost perfectly. Unlike some of its peers that are still spending money on their mega development projects, Total has the ability to wind down its spending or, if it has the foresight, start work on the next phase of development.

With what appears to be a production portfolio more resilient to oil and gas prices than those of its peers, Total looks to be in much better shape than others to manage this downturn and come out the other end a strong company in the oil and gas space.