Harley-Davidson faces stiff competition and relatively weak demand growth, but its stock is cheap and its brand is strong. Image source: Getty Images.

By many metrics, shares of Harley-Davidson Inc. (NYSE:HOG) are cheap today. The company also pays a relatively small amount of its profits in dividends, and has been steadily increasing its dividend over the past five years. Historically speaking, investors tend to do well when they buy companies at a discount, and dividend growth can lead to fantastic long-term returns.

But at the same time, there's no such thing as a can't-miss investment, and Harley's no exception to that rule. The potential chink in Harley-Davidson's armor? Stagnant growth in demand for its products, at the same time as the competition is heating up and Polaris Industries Inc. (NYSE:PII) is starting to take market share. There's also the matter of Harley's debt exposure related to its financial services business that investors shouldn't ignore.

Let's take a closer look at the upside and the downside for Harley.

Harley-Davidson shares have been on a strong run since bottoming out in late January. Since that time, the company's stock price has increased a strong 43%. But even with such a nice bounce-back, it's arguable that it's still a pretty decent price. Harley shares trade for about 13.8 on a price-to-earnings basis -- well below the S&P 500 multiple of  24.85, and, excluding the sell-off earlier this year, the cheapest its shares have traded for since the Great Recession: 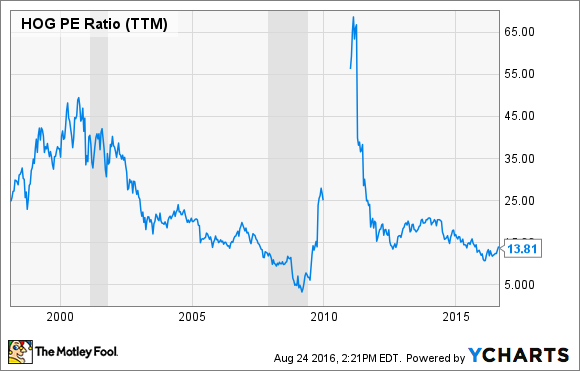 Dividend growth could pay off big in the long term

Harley currently pays a $0.35 per-share quarterly dividend, which works out to a 2.47% yield at current prices. That may not seem like much, but here's some added context: 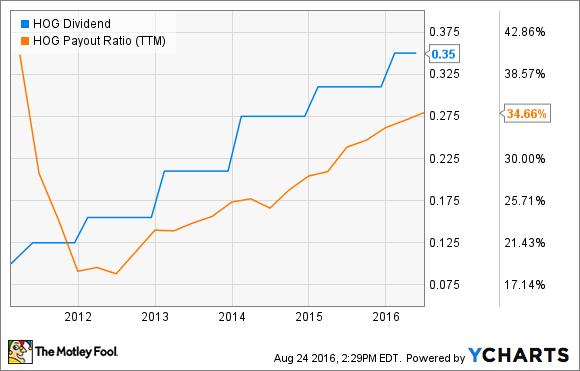 Since the end of the recession, Harley has steadily pumped up its dividend. At the same time, the company pays out only about 35% of profits in dividends, giving it both a relatively wide margin of safety -- something it didn't have as much of coming into the financial crisis, and which played a big role in its dividend getting cut -- and supporting its ability to continue increasing payouts in the future.

If Harley's management is able to continue increasing the dividend in coming years, that steady income boost could lead to fantastic long-term returns.

Competition is a reality in essentially every industry, and it often pushes companies to innovate, become more efficient, and otherwise improve their businesses and products. But at the same time, the segment of the motorcycle industry that Harley dominates has been slow to grow in recent years, while its efforts to expand overseas have been slow to pay off.

Harley's sales in the second quarter were mixed at best. Motorcycle and related revenue was basically flat, while total global units sold was up a scant 3.5%. Earnings per share were up 8%, to $1.55 per share, but both operating income and net income were down from last year. At the same time, Polaris' motorcycle brands, Victory and Indian, reported 23% growth in sales.

Put one and one together, and when a competitor is growing sales faster than you are (and faster than the overall market), it means it's taking market share from you. That's happening to Harley now.

Harley also carries a significant amount of debt that creates a risk that shouldn't be ignored. On the one hand, a significant amount of that debt is tied to loans issued by Harley-Davidson's financial services segment to Harley buyers. But on the other hand, all that consumer debt created a not-so-insignificant risk for the company during the Great Recession.

And while I'm not saying that the company is destined to repeat the past, there's no getting around the fact that $7 billion in long-term debt creates some risk, and that risk is compounded because Harley makes and sells products that people will put off buying (or making the loan payment on) when money is tight.

Competition isn't likely to put Harley-Davidson in the ditch, though Polaris' Indian and Victory brands could take even more market share in the short term. But the Harley-Davidson brand is legendary, and as long as the company continues to make a high-quality product, its brand appeal should remain strong. Furthermore, cyclical demand will ebb and flow over time, and the long-term growth of the global economy -- particularly as the global middle class expands -- should be great for the company's long-term prospects.

However, its large debt shouldn't be ignored. Yes, the debt is largely secured by motorcycle loans, but it's also a risk, particularly in a poor economy, when a motorcycle payment will get skipped before a house payment. The catch? The global economy isn't horrible -- it's just not very good. If it continues to improve, Harley's prospects could blossom. If things deteriorate, Harley could get squeezed by falling sales and a deteriorating loan portfolio. So there's your risk.

But even with those risks, the long-term prospects look solid for Harley Davidson, and its shares are relatively undervalued. Factor in the potential for further dividend growth in the years to come, and buying its shares at the current value point should pay off.