Fresh off a strong Q2 earnings beat and riding high on takeout rumors, the past 3 months have been good to Biogen (NASDAQ:BIIB) investors, with shares up 27% since July. The same, however, cannot be said for Celgene (NASDAQ:CELG), up a measly 3% and trailing the iShares Biotech Index (NASDAQ: IBB). 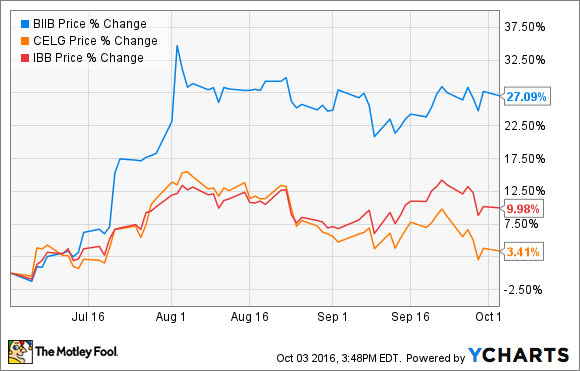 Although most analysts would consider Biogen a "value" stock and Celgene a "growth" stock, these companies do share some very similar characteristics. Both are bluechip biotech stocks with market caps hovering around $70 billion (Biogen) and $80 billion (Celgene). They are also both leaders in their fields, with Celgene's Revlimid accounting for more than 60% of market share in first and second-line multiple myeloma (MM) and Biogen's multiple sclerosis (MS) franchises accounting for around 47% of global MS revenues. While these two companies have not competed in the past, Celgene has announced its intention to move into the highly lucrative MS space with its 2014 purchase of small biotech Receptos and its anti-inflammatory drug ozanimod. So which is the better stock to buy today? It's time for a deeper dive.

As evidenced from the chart above, both Biogen and Celgene have relatively concentrated product portfolios, with one or two products accounting for the majority of total revenues. For Biogen this consists of the MS titans Tecfidera and Interferon, while for Celgene, Revlimid takes the cake. While Biogen surprised analysts to the upside in the second quarter by beating revenue estimates of $2.8 billion by $100 million, Celgene is undoubtedly the faster growing company, with Q2 revenues up 21% year-over-year (YoY) versus Biogen's 12% YoY growth.

Hands down, the most exciting drug in Biogen's pipeline is aducanumab, a beta-amyloid-attacking human monoclonal antibody currently being studied as a potential treatment for Alzheimer's disease. While estimates vary, some have quoted peak sales of aducanumab as high as $20 billion for this large and under-served patient population. However, Alzheimer's disease is a complex disorder, and other anti-amyloid treatments have failed in the past. Aducanumab is currently in two Phase 3 trials, "Engage" and "Emerge". However, these trials will not release top-line data until at least mid-2020. Given that other anti-amyloid therapies have failed in the past and that 99% of Alzheimer's trials end in failure, I am not optimistic regarding aducanumab's chances.

Celgene, meanwhile, has a bet big with its aforementioned $7.2 billion acquisition of Receptos and its experimental drug ozanimod. Ozanimod is part of the exciting new category of S1P modulators for treatment of autoimmune diseases. Receptos made headlines in 2014 with its announcement that ozanimod had met its primary endpoint in a phase 2 trial as a treatment for relapsing multiple sclerosis (RMS) with potentially best in class safety and a once-daily oral dosing. While estimates vary, Celgene's management has projected peak sales of ozanimod between $4 billion and $6 billion annually. Ozanimod's two Phase III multiple sclerosis trials are expected to read out in the first half of 2017, with the potential to support an approval the following year.

Finally, a note on valuation. While Celgene looks expensive with a trailing PE of 44x earnings, it is the forward PE we care about for growth companies. On this measure, Celgene and Biogen come out about even -- both around 15x forward PE. However, it is on the PEG ratio (defined as the PE ratio divided by the expected growth rate in earnings) that Celgene truly shines, with a PEG ratio of 0.8 versus Biogen's 1.8. Generally, a PEG ratio below 1 is a signal that investors are paying less in price for a stock than what its growth potential should command.

The combination of faster growth, a strong pipeline, and a low valuation make Celgene the obvious choice for my portfolio. While Biogen could strike gold with aducanumab, I don't consider the odds of aducanumab's approval worth choosing Biogen over Celgene. For Biogen investors who have done well so far this year, it might be time to ring the register in favor of Celgene.