You can see where the priorities of Smith & Wesson Holding (NASDAQ:SWBI) now lie. For the third time in five months the gunmaker has bought a company that targets its accessories and outdoors sporting goods business, signalling what direction it needs to go in the future. 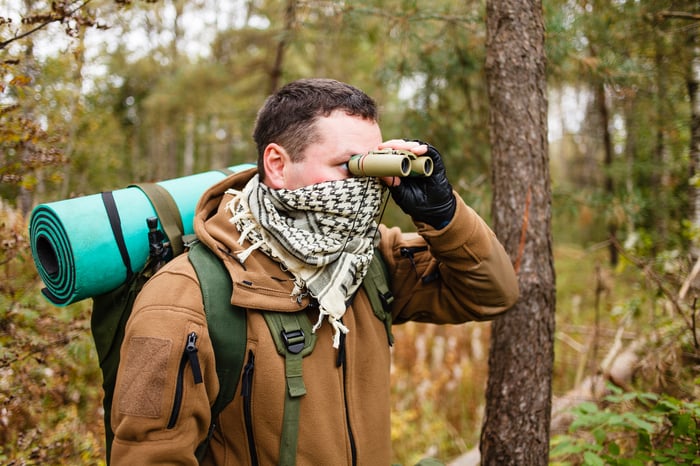 Smith & Wesson Holding is looking to survive a day when gun sales aren't as robust by buying a survivalist outfit that adds to its extreme outdoors sporting goods portfolio. Image source: Getty Images.

Smith & Wesson announced recently it was buying camping and extreme outdoors equipment maker Ultimate Survival Technologies (UST) for $32 million, with the possibility of $2 million more depending on sales -- a pretty good price considering the outfitter has some $24 million in trailing revenue. The gunslinger dropped $85 million on knife maker Taylor Brands and $95 million on laser sight maker Crimson Trace, but UST Brands is an established name in what some might call a small but fast-growing industry and that gives Smith & Wesson the opportunity to make a mark in the space.

According to the gunmaker's release announcing the purchase, the preparedness outfit delivered impressive revenue growth between 2012 through 2015, achieving compounded annual growth rates of 49% following the expansion of its product lines and retail presence. Those interested in preparedness can now even find Ultimate Survival's products for sale at Wal-Mart.

It's not easy to peg just what the opportunity is in the survival industry, as those individuals prepping for an uncertain future are likely doing so out of the spotlight while also converting everyday household items to their needs. Yet the popularity of shows like Survivorman, Dual Survivor, and even the extreme Doomsday Preppers, along with personalities such as Les Stroud, Bear Grylls, Cody Lundin, and Dave Canterbury suggest there is an undercurrent of interest in the topic. 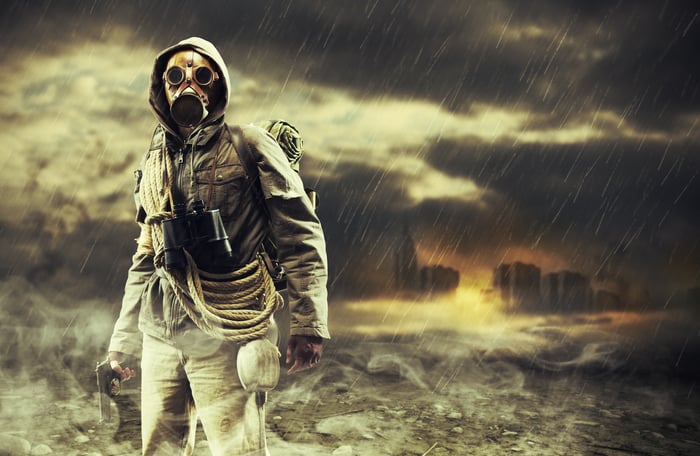 Smith & Wesson's entrance into the market has the potential to raise the profile of the industry even further but make it much less extreme sounding.

The gunsmith has been looking to put its stamp on the market since it acquired Battenfeld Technologies in 2014 for $130 million. It sees the outdoors sporting-goods market as a means of minimizing the wide swings in performance that occur in the firearms industry. Though the company might be enjoying booming sales at the moment, it probably realizes it's not always going to be the salad days and wants to have something to fall back on in leaner times.

Moreover, there is greater opportunity for growth in the broader extreme outdoor-sporting goods market, which is valued at $60 billion, than there is in the U.S. firearms industry, which is roughly a quarter of the size.

There is something to be said for the diversification. Shares of industry peer Sturm, Ruger (NYSE:RGR) walks nearly in lockstep with Smith & Wesson, yet it doesn't have the same backstop available to it as it sells guns and only guns. A downturn in the gun market or, worse, greater restrictions placed on gun ownership would dramatically hurt sales.

As we've seen since the presidential election, where Smith & Wesson's stock has plummeted on the belief that a Donald Trump presidency has taken gun control off the table for the moment, the gunmaker would have another avenue of growth still available to it.

Turning its attention to sporting goods would make it more like near-peer Vista Outdoor (NYSE:VSTO), which has dozens of brands in its portfolio, including Bell bicycle helmets, CamelBak water reservoirs, and Tasco binoculars, but also owns Savage Arms, a manufacturer of rifles and shotguns, as well as Federal Premium ammunition.

Ultimate Survival Technologies is a respected name in survival, having been around for some 80 years, and brings with it gear like LED lights, all-weather fire starters, signal mirrors, first aid kits, whistles, survival kits, camp kitchen products, and more.

Yet as Vista Outdoor has found, industry trends can sometimes lead operations astray. Its fiscal 2017 first-quarter earnings suffered as sales continued to target firearms rather than accessories and gear. When gun sales are hot as they are now, and buyers are falling over themselves to get the latest firearm, retailers aren't going to be pushing accessories when they can make the easy money with a gun sale and quickly move on to the next customer.

Having multiple streams of revenue is smart for Smith & Wesson, even if the UST purchase and the survivalist niche aren't make or break for the business. But the gunmaker has indicated it doesn't see its future so much in firearms as it does in sporting goods.

Last week it filed a proposal to have shareholders vote on a name change for the company from Smith & Wesson to American Outdoor Brands. That shows it wants the extreme outdoors business to grow from its current level of just 10% of revenue to perhaps account for the majority of them. That's a big change, obviously, and it not only indicates that investors can expect to see a lot more of these types of acquisitions, but also that Smith & Wesson is preparing for its own doomsday when gun sales eventually fall.