Please ensure Javascript is enabled for purposes of website accessibility
Free Article Join Over 1 Million Premium Members And Get More In-Depth Stock Guidance and Research
By Rich Duprey - Jul 27, 2016 at 6:33AM

The gun company wants to give itself some protection from the feast-or-famine cycles of its primary business. 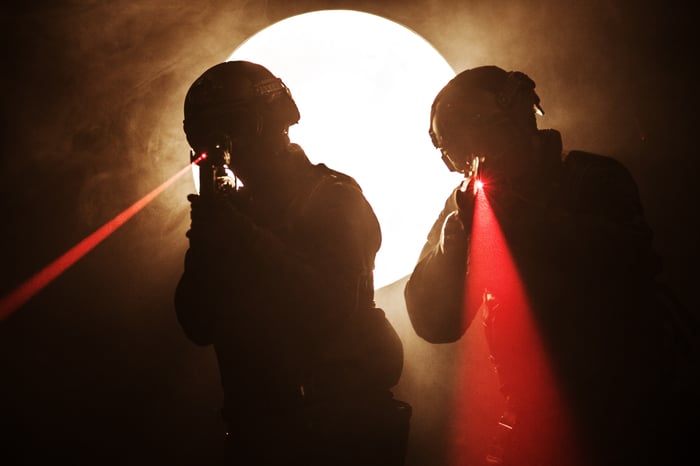 By expanding into both sporting goods and accessories, like the latest acquisition of laser sight maker Crimson Trace, Smith & Wesson hopes to smooth out the ebb and flow of firearms demand. Image Source: Getty Images

Gun sales are hot, but they tend to run in cycles, and Smith & Wesson ( SWBI -1.10% ) is looking to smooth out the boom-and-bust nature of its business model. It recently bought knife maker Taylor Brands for $85 million, and the company just announced the acquisition of leading laser sight company Crimson Trace for $95 million -- deals that continue the gunsmith's expansion into sporting goods and supporting businesses.

Last month, Smith & Wesson reported a 22% jump in firearms sales for its fiscal fourth quarter to $203.7 million and a 24% rise to $657 million for all of fiscal 2016. Industry peer Sturm, Ruger said its own quarterly firearms sales were up 26.5% year-over-year.

On target for record growth

The FBI reports that the number of background checks it runs on individuals looking to buy guns have been never been higher -- the agency has conducted record numbers of checks for 14 consecutive months. While the 23.5 million background checks conducted in 2015 were an all-time high -- 10% higher than 2014 -- the FBI says 2016 is running at a pace 32% ahead of last year.

Smith & Wesson's stock price is up almost 90% over the past year, hitting $30 a share and more than doubling from its low point under $15 a stub last August.

Obviously, the company won't abandon the gun market. Indeed it could use its current strength to explore new opportunities. For example, Smith & Wesson has no presence in the shotgun market but could use its M&A strategy to establish a foothold in a segment that appeals to hunters and outdoorsmen. And the Crimson Trace purchase shows there are plenty of side businesses that meld neatly with firearms.

Earlier this year, Smith & Wesson revealed how it wants to use its 2014 acquisition of hunting and sporting goods accessories maker Battenfeld Technologies to expand beyond the narrow confines of firearms. It laid out a five-year plan to find buyout targets that would meet its own strict thresholds for investment returns.

Accessorizing with all the accoutrements

The accessories division is growing in importance. While it accounted for just 9% of total sales, the Battenfeld acquisition helped the division grow revenue by 20% last quarter. And it's smart to focus on it.

Sporting goods is an estimated $60 billion industry, some four times larger than firearms, and the shooting accessories and reloading markets are potentially even more profitable. Smith & Wesson points out consumers spend almost as much on accessories for firearms as they do on the guns themselves. The company says the program allows it to feel confident in its ability to hit a long-term gross margin target of 37% to 41% for the company as a whole.

The Taylor Brands purchase was an easy decision to make, as that company already had a long history as a licensee for Smith & Wesson and M&P-branded knives. It also owns a number of established brands such as Schrade, Uncle Henry, and Imperial. Similarly, Crimson Trace has long been a key supplier of laser sighting systems for the gunmaker.

Where Smith & Wesson likes Taylor's gross margins that "are aligned with those in our existing Accessories Division", Crimson Trace has organically grown revenue in excess of 10% annually on a compounded basis for 10 years.

Not an easy lay up

There are risks associated with the move into the sporting goods business, of course. Sports Authority and Eastern Mountain Sports have both declared bankruptcy, while Cabela's has been underperforming despite targeting the same customers Smith & Wesson wants to reach. It's rumored that rival Bass Pro Shops is angling to make a bid for Cabela's. Certainly, there's a difference between retailer and manufacturer, but a soft retail environment could spell trouble regardless, both for sporting goods and firearms.

Smith & Wesson's fortunes will still rise and fall primarily on gun sales. But to smooth out the bumpiness of demand for guns, we'll likely see more such acquisitions in the future. In the meantime, there's no sign that the white-hot consumer demand for guns is letting up, so the company may as well double dip to capitalize on people's desire for accessories, too.