Please ensure Javascript is enabled for purposes of website accessibility
Log In Help Join The Motley Fool
Free Article Join Over 1 Million Premium Members And Get More In-Depth Stock Guidance and Research
By Rich Duprey - Jan 27, 2016 at 8:13AM

The gunmaker says it's more of a brand extension than a new line of business.

Weapons for self-defense have been a huge growth factor for Smith & Wesson, but demand is volatile and expansion into sporting goods might smooth out the highs and lows. Image source: Smith & Wesson.

It's hard to think of any industry that's hotter today than firearms, but Smith & Wesson Holding (SWBI -1.27%) is looking to cool down its two smoking barrels by expanding into outdoor sporting goods. Although the rationale behind the plan makes sense, successfully executing it may be more difficult.

Appearing at the massive SHOT Show trade show in Las Vegas last week, Smith & Wesson revealed in an investor presentation its plans to expand into the $60 billion sporting goods industry by buying its way into the business. It may be shooting out the lights right now, but demand is too volatile, and having broader appeal beyond just firearms could help smooth out the wild swings it experiences.

Filling them full of lead
Smith & Wesson, Sturm, Ruger (RGR -3.55%), Glock, Beretta, and other gunmakers had a banner year last year as heightened fear of gun control legislation along with valid concerns over personal safety drove the sales of guns higher.

When the FBI conducted more than 23 million background checks on gun buyers -- 3.3 million were performed in December alone -- Smith & Wesson had to scrap the earnings guidance it had given just a month prior to say it now believed it would sell much more (and earn much more) than previously thought.

That's all well and good, but it's hard for a gun manufacturer to plan a production schedule around such constantly fluctuating demand -- which is why Smith & Wesson believes expanding into outdoor sporting goods could provide solid ballast to the volatility. 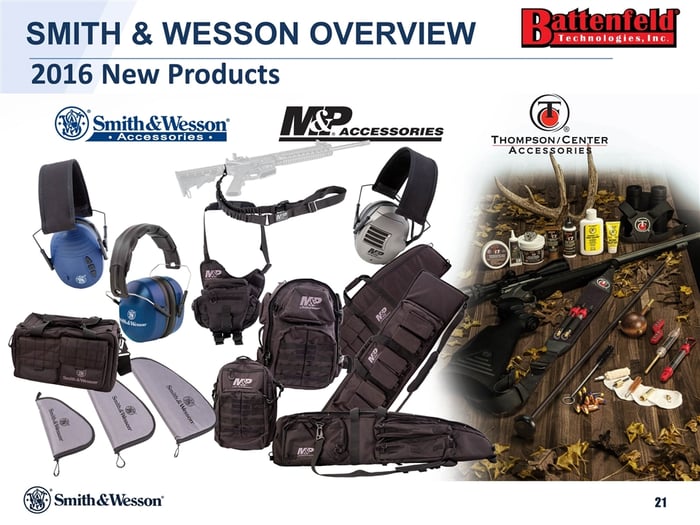 Be a good sport
Its presentation to investors laid out a five-year plan where it would look for acquisitions that presented solid growth potential.

Smith & Wesson already generates $18 million in sales annually from accessories, some 13% of its total revenues, a base it built following the acquisition of Battenfeld Technologies in 2014. It's a highly profitable business offering gross margins in excess of 50% and operating margins of almost 20%.

The new focus wouldn't abandon guns and would actually help it enter new parallel markets. For example, it has no presence in shotguns now, but it envisions using the new expansion program to establish a foothold, one that would appeal to hunters and outdoorsmen.

But investors should use caution in looking at the path Smith & Wesson has chosen. Although the gunmaker wouldn't become a retailer, the experience of sporting goods stores such as Cabela's (CAB) and Dick's Sporting Goods (DKS 0.74%) is instructive that there are risks in the plan.

A mountain of trouble
Although a retailer, Cabela's appeals to the exact market Smith & Wesson would target. In its third-quarter earnings report, the sporting goods retailer continued to experience weakness in apparel and footwear, which caused comparable-store sales growth to decline, and it has had to rely more heavily upon its smaller-format stores for growth rather than its theme-park-sized stores that had been its primary concept. Dick's also experienced atypical seasonal weakness that was only tempered because it had a strong back-to-school season.

Over the past year, Cabela's stock has fallen 27%, while Dick's is down 30%. Hibbett's Sports was even worse, with a 37% loss of value over the past 12 months, and Big 5 Sporting Goods, though demonstrably better than the others, still recorded a loss for the year.

Retail is experiencing the effects of a concerned consumer who has taken a cautious approach to spending in an uncertain economy. Smith & Wesson's decision to establish a presence in that field by developing ancillary businesses opens itself up to that risks, even as it minimizes the boom-and-bust cycle of gun demand. And the gunmaker admits it could take time to find the right company to acquire to meet its needs. Newell Rubbermaid, for example, just acquired Jarden, the owner of brands such as Coleman, Rawlings, and Shakespeare, which has been trying to roll up the sporting goods industry under one umbrella. 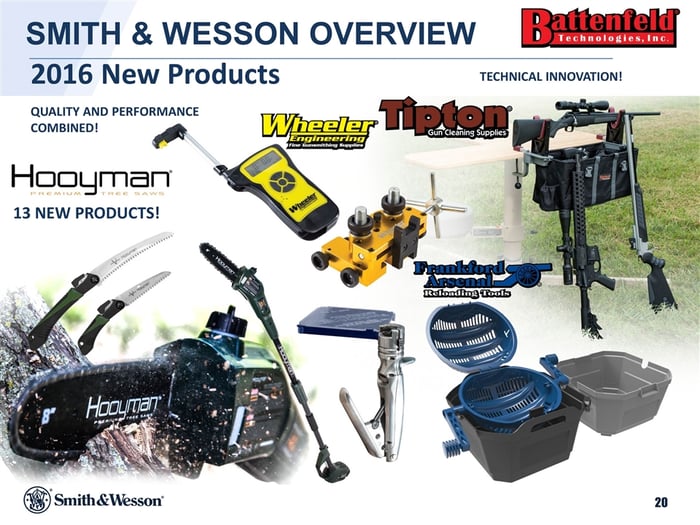 Worth a shot
There certainly seems like greater upside potential for Smith & Wesson to capitalize on its well-known brand. The gunmaker notes that the Smith & Wesson brand has higher name recognition than any other gun brand, and one of every two revolvers owned today is a Smith & Wesson revolver.

But shooting out the lights in outdoor sporting goods may not be as easy to replicate for Smith & Wesson, as competition is already fierce and retailers themselves are experiencing softness. The Battenfeld acquisition shows the gunslinger is capable of greater vertical integration, but it's important to find the right target to hit.