Please ensure Javascript is enabled for purposes of website accessibility
Log In Help Join The Motley Fool
Free Article Join Over 1 Million Premium Members And Get More In-Depth Stock Guidance and Research
By Rich Duprey – Jan 13, 2016 at 11:19AM

Turns out it wasn't the shot heard 'round the world. While many felt President Barack Obama's promise to do an end run around Congress and enact new gun controls via executive action would cripple the industry -- but spur massive gun sales in the interim -- it's now being viewed as little more than incremental action at the edges.

The stocks of gun manufacturers Smith & Wesson Holding (SWBI 0.97%) and Sturm, Ruger (RGR 0.87%) initially shot higher with the announcement of the executive action, but have since returned to the levels they were trading at before the president's press conference. But make no mistake, gun stocks remain at markedly elevated levels. Shares of Smith & Wesson have more than doubled over the past year while Ruger is up some 57%.

But while fear among gun owners and enthusiasts that the president would impose strict laws on ownership have fueled more than a few sales since he took office, the white-hot growth being witnessed in the past year seems to have little to do with anything Obama was expected to propose and seems to have more to do with concerns about personal safety.

Earlier this month, Smith & Wesson announced that gun sales were growing at such a torrid pace, it needed to scrap the earnings guidance it gave just the month before -- and had raised from the prior quarter -- and would sharply boost its estimates of how well it would do in the fiscal third quarter and for the full year.

While many have said the president's anti-gun rhetoric backfired and drove gun sales higher, there seems to be a more basic impetus driving sales.

My review of the top five best-selling handguns across all of 2015 show those designed for personal protection were the ones most sought. Smith & Wesson's M&P Shield models that it introduced in 2012 have proved so popular that they've quickly become "the best-selling personal protection and self-defense pistol" on the market, with the gunmaker producing its one millionth model during the second quarter.

Designed to be slim, concealable, and lightweight, they're perfect for those desiring to protect themselves, their families, and their property. Other gun manufacturers have also benefited from demand for firearms that are designed for concealed carry.

Glock, Sig Sauer, and Taurus have all produced handguns that ranked as the most popular handguns as determined by GunBroker.com, the world's largest online auction site for firearms and accessories. But the most popular handgun using data from that site was the Kel-Tec PMR-30 that offers 30 double-stacked .22 Magnum rounds in a compact, lightweight design. 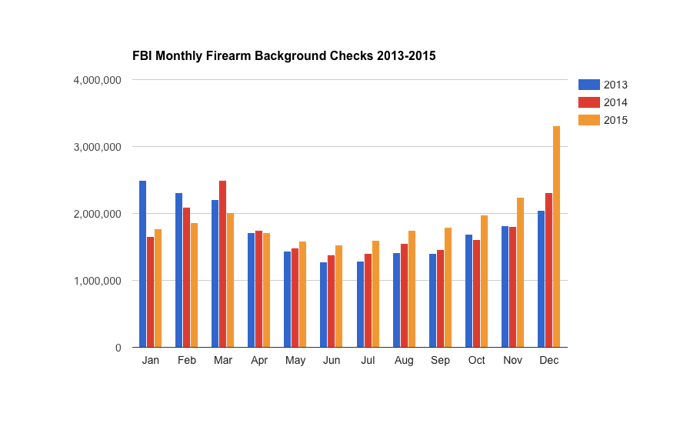 Chart by author from data provided by the FBI.

If nothing else, 2015 is going to be remembered as the year that broke all records for background checks conducted by the FBI for people wanting to buy a firearm. More so than even 2013, which saw previous records broken in the aftermath of the Sandy Hook shooting, last year was marred by violent civil unrest in places such as Ferguson, Mo., and Baltimore while terrorist incidents in San Bernardino, Calif., and Paris and convinced more people than ever they needed an effective means of self-defense.

Beginning in May and continuing every single month thereafter, the FBI conducted more background checks on people wanting to buy a gun than at any other time for that particular month. It culminated in December, when more than 3.3 million investigations were conducted, the first time it ever cracked that threshold. For all of 2015, the FBI performed over 23 million background checks.

So it was not gun buyers responding to just the president's words, but rather to events unfolding around the world and a primal need for self-protection. That's not likely to abate anytime soon, which means Smith & Wesson and Sturm, Ruger will likely be shooting out the lights for some time to come.