Like much of the country, the restaurant industry is divided over the prospects of a President Donald Trump.

Several well-known restaurateurs weighed on the election in letters to their employees and general missives to the public. Shake Shack (NYSE:SHAK) Founder Danny Meyer said, "This is tough," but used the moment to encourage his staff to harness the power of hospitality at a time when many people needed it.

Starbucks (NASDAQ:SBUX) CEO Howard Schultz sounded a similar tune, saying he was "stunned," but that he called upon his "partners" to "answer the challenges of the day with kindness and compassion."

Most notable was GrubHub (NYSE:GRUB) CEO Matt Mahoney's response in a letter to employees, which included the line, "If you do not agree with this statement then please reply to this email with your resignation." Mahoney had directed that sentiment at the intolerance raised by the Trump campaign, but some conservatives interpreted it as a message for any Trump voters who worked for his company and called for a boycott. After a brief post-election sell-off, GrubHub's stock has since recovered.

On the other side of the coin, several restaurant chiefs cheered Trump's election. Early Trump supporter Andy Puzder, CEO of privately held CKE Holdings, which is the parent of Carl's Jr. and Hardee's, called the result a "victory for economic growth." Robert Crisanti, CEO of the International Franchise Association, called the election "historic."

How a Trump administration could affect restaurants

Restaurant stocks have mostly surged since the election as investors seem to think a Trump administration's policy in areas like healthcare and the minimum wage would be better for restaurants than Hillary Clinton's would have been. 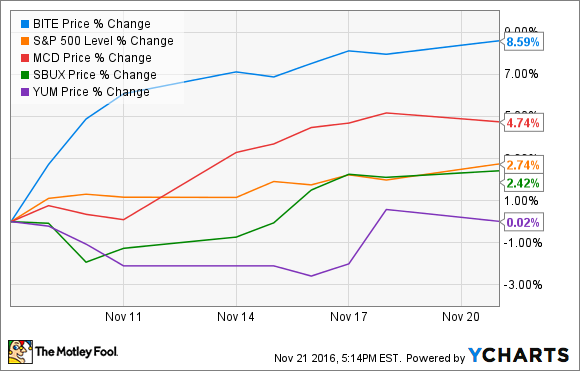 As the chart above shows, the restaurant ETF BITE (NASDAQ: BITE) has surged nearly 9% since the election, but gains in the biggest restaurant stocks like McDonald's (NYSE:MCD), Starbucks, and Yum! Brands (NYSE:YUM) have been more modest. Yum, which recently divested its China division, has been essentially flat.

Among the political issues most likely to affect restaurants are labor-related as the restaurant industry is one of the most labor-intensive in the market. Many restaurants spend more than a quarter of their revenue on labor, while in other industries, it makes up only a small fraction of expenses.

Since restaurants tend to pay low wages, the minimum wage is a crucial issue for the industry. Although four states voted to raise minimum wages on Election Day, including Colorado, Arizona, Maine, and Washington, the likelihood of a minimum wage hike under a Trump administration, especially with a Republican Congress, is low, which should help industry profits.

Rolling back the Affordable Care Act, as Trump has promised to do, would also alleviate the healthcare burden on restaurants since the law required businesses with 50 or more full-time employees to provide 95% of employees with health insurance. It seems less likely that Trump will roll back rules making more workers eligible for overtime pay since he believes only small businesses should be exempt from the new law.

The immigration issue could be a thornier one for restaurants. Undocumented workers are disproportionately represented in the restaurant industry, where such workers make up more than 10% of the nation's 12.7 million restaurant employees, and Trump's threat to deport the 11 million illegal immigrants living in the country, or even just 2-3 million, as he told 60 Minutes recently, would threaten much of the restaurant industry. A 2008 study found that more than 20% of restaurant cooks nationwide were undocumented workers, and famed chef and TV host Anthony Bourdain said "every restaurant in America would shut down" if Trump's deportation plan were enacted.

Political issues are likely to continue to move restaurant stocks along with the rest of the market at least through the early days of a Trump administration. However, a bigger factor to watch for may be general economic growth as restaurants tend to be more macro-economically sensitive than the rest of the market. If the country starts to head into a recession, restaurants will be among the first businesses to suffer. For that reason, for restaurant investors, economic growth should remain the biggest question mark about the incoming Trump administration.