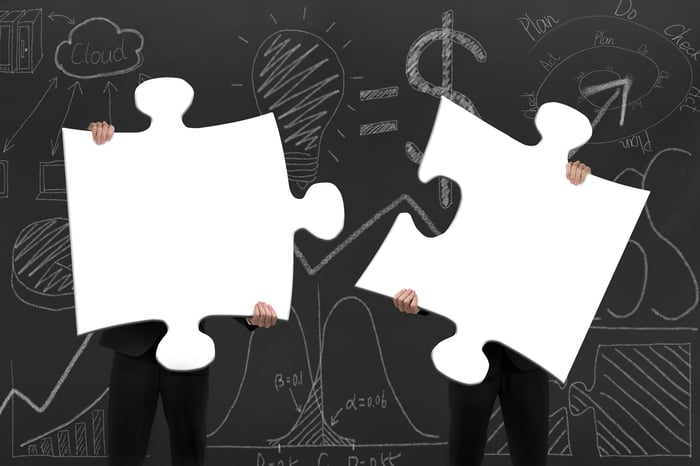 Investors will be closely watching four agricultural megamergers in 2017 totaling some $186 billion. Low grain prices have forced crop protection suppliers and seed and trait developers to cut selling prices in the last two years, as farmers have been forced to make difficult decisions to keep their heads above water. That economic hardship, combined with an oversupplied market, has also led to a historic collapse in fertilizer prices -- taking the share price of leading manufacturers along for the ride.

Management teams explored their options, and in the end eight teams decided that a merger was the best available. Should investors expect each deal to be approved? Are there causes for concern? Let's explore the merits of each proposal.

Why merge: The companies claim that merging will unlock $30 billion in market value, save up to $3 billion in annual costs, and provide up to $1 billion in additional growth synergies. Synergies rarely play out as expected, but this isn't a normal merger. Dow Chemical and DuPont plan to combine their operations, then split as quickly as possible into three companies dedicated to core growth areas: agriculture, material science, and specialty products.

Why the deal will be approved: U.S. regulators have already signed off on the deal, but E.U. regulators have delayed their decision to February 2017. Both companies are optimistic the deal will go through. Actually, both are acting as if the enormous merger is a slam dunk. The plan to split into three "smaller" companies should help to appease regulators, although the smallest business of the trio will have annual sales of $12 billion. Either way, regulators shouldn't have any issues with two of the three splits, which bodes well for approval. But...

Why the deal will be denied: Agriculture. Regulators probably don't care that Dow Chemical and DuPont are merging their agricultural operations, specifically crop protection (pesticides) and seeds and traits products. It's the fact that the top six agricultural technology companies are merging simultaneously that should worry investors banking on approval.

Consider that the DowDuPont agriculture spinoff will have annual sales of $16 billion -- more than Monsanto (NYSE:MON) has ever had. Regulators worried about consumer and farmer choices being narrowed from six suppliers to just three suppliers could nix this megamerger, or at least the agricultural part of it. Don't forget, regulatory pressure forced Halliburton and Baker Hughes, as well as General Electric and Electrolux, to abandon mergers that would have led to similarly heavily aggregated industries.

Why merge: Food security. China is home to 19% of the world's population, but just 7% of the world's arable land. It has only approved two genetically modified crops, resulting in a technology gap which, together with soil and geographical differences, contribute to 40% lower yields in corn and soybean production compared to the United States. The state-owned ChemChina is looking to skip years of seed and trait R&D by acquiring an industry leader.

Why the deal will be approved: U.S. regulators have signed off on the deal, saying that it doesn't threaten the food security of the United States. The only remaining regulatory hurdle resides in the E.U. (a common theme for these megamergers). There really shouldn't be any sizable objections to approval, except, of course, the fact that the rest of the industry is consolidating at the same time.

Why the deal will be denied: Aside from fears of industrywide consolidation, there aren't many reasons to expect denial. Here's a long shot: In October 2016 news leaked that ChemChina and Sinochem were discussing a possible merger that would create a $100 billion chemical manufacturing giant. There's a slim chance that a merger between the state-owned chemical suppliers will cause U.S. regulators to take a second look at the Syngenta acquisition. But, while state-owned Sinochem operates a fertilizer business, that will likely be separate enough from crop protection and seeds and traits to avoid tripping regulatory alarm bells. We'll see.

Buying the next great GMO

Why merge: Monsanto has the best potential for growth and the best portfolio and pipeline of next-generation agriculture products among the big six. That includes the industry's best replacement for Roundup Ready traits, called RoundUp Ready Xtend, which allows crops to tolerate the application of glyphosate and dicamba herbicides. The company owns both the genetic traits and advanced formulations of the combined herbicides. That, combined with a regulatory hiccup in Dow Chemical's competing product, should pave the way for major market share in a multibillion technology ecosystem. Bayer -- and everyone else -- wants Monsanto's pipeline and portfolio.

Why the deal will be approved: Bayer may need to spin off parts of its herbicide business to appease regulators, but Mr. Market isn't so optimistic. While Monsanto shareholders approved the deal in December, shares are still trading 16% below the $128 offer price -- and have never come close since the merger was announced. It's a very public gauge of sentiment, which is pretty sour on approval. However, both companies' CEOs met with President-elect Donald Trump in early January, and are hopeful that business-friendly practices will help gain approval from U.S. regulators sooner than later.

Why the deal will be denied: The bulk of investor pessimism likely stems from concern over regulators' response to industrywide consolidation that includes the two megamergers listed above. It's a real concern -- and how regulators respond to the Dow Chemical-Dupont merger next month will likely set the tone for the remaining deals on the slate. I've been a vocal critic of this deal since rumors first began swirling. I think Monsanto is stronger as a stand-alone company and that the merger is a kneejerk reaction to short-term headwinds, but I don't get a say in the end.

Why merge: Synergies and untapped growth potential -- you know, the usual. The biggest takeaway here is that a Potash-Agrium merger would allow each to benefit from the other's strengths. The former is the world's largest fertilizer miner and producer, while the latter is the world's largest retailer, generating 77% of its revenue from retail sales in 2016. Putting the two together could indeed lead to cost and pricing benefits. It's also worth noting that these are two of the three members of the fertilizer cartel known as Canpotex, which could compound their ability to extract value from an expected rebound in agriculture nutrient prices.

Why the deal will be approved: When one Canadian company mergers with another, will anyone raise an objection? The fertilizer industry is very important to the Canadian economy, especially for exports, so regulators there shouldn't have many problems combining the dynamic duo. The merged company will employ 20,000 people in the country -- a number that could increase with fertilizer prices.

Why the deal will be denied: Of the four megamergers listed here, this is the most likely to gain approval.

One very important angle that investors should consider is how a rapidly changing political landscape, both in the United States and Europe, could affect proposed megamergers. It's generally expected that the U.S. will adopt business-friendly practices that should help grease the wheels for merger and acquisition activity. Importantly, investors will want to watch what occurs when E.U. regulators meet in February to decide the fate of the Dow Chemical merger with DuPont. That decision will likely set the tone for the remaining megamergers in the agricultural industry.