Shares of Monsanto Company (NYSE:MON), an agricultural juggernaut focused on crop protection products and genetically modified seeds, are up 6% after Germany based Bayer AG's (OTC:BAYR.Y) $66 billion deal to acquire Monsanto finally won approval from the U.S. Department of Justice.

Most investors had grown optimistic that the deal would finally jump its remaining hurdles and be completed during 2018, but there was always a sliver of doubt -- until Monday, that is. With the DOJ's approval, the largest remaining regulatory hurdle has been cleared and the largest deal in the seeds and crop-chemicals industry is nearly in the history books. According to The Wall Street Journal, the department reached an agreement with the two companies in recent days after previously being unsatisfied with the plan and having concerns about competition being hurt by the combined company. 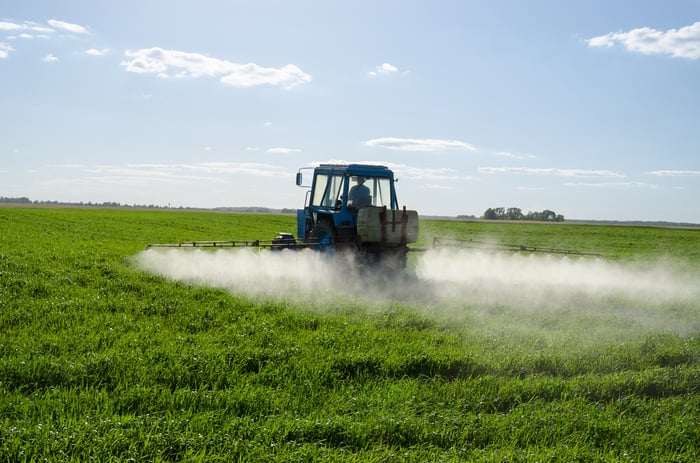 Today's 6% pop merely moves Monsanto closer to the $128 per share deal price and removes a sizable amount of uncertainty hanging over the stock. There are significant challenges in the industry, especially as farmers are needed to produce more with less.

"The agriculture industry is at the heart of one of the greatest challenges of our time: how to feed an additional 3 billion people in the world by 2050 in an environmentally sustainable way," said Liam Condon, member of the Board of Management of Bayer AG and head of the Crop Science Division, in a press release.

Bayer and Monsanto combined will have a strong portfolio of crop protection products and world-class seeds and traits to meet the growing demand, and this should be a deal that delivers long-term value to shareholders.