"Man, despite his artistic pretensions, his sophistication and many accomplishments, owes the fact of his existence to a six-inch layer of topsoil and the fact that it rains."
-- Anonymous

Agriculture was, and continues to be, a pillar upon which human civilization was built. The ability to harness the power of land, water, and sunlight to produce food allowed us to become a non-migratory species, establish settlements, and create division of labor. When it comes to investing in must-need items for humans, agriculture is likely high on the list. At the same time, though, agriculture is an incredibly cyclical business that remains highly dependent on the weather, which can make for unique challenges to which some investors aren't accustomed.

Let's search around the world of agriculture and food production to see what makes these companies tick and identify the top stocks in the agriculture industry for you to buy now. 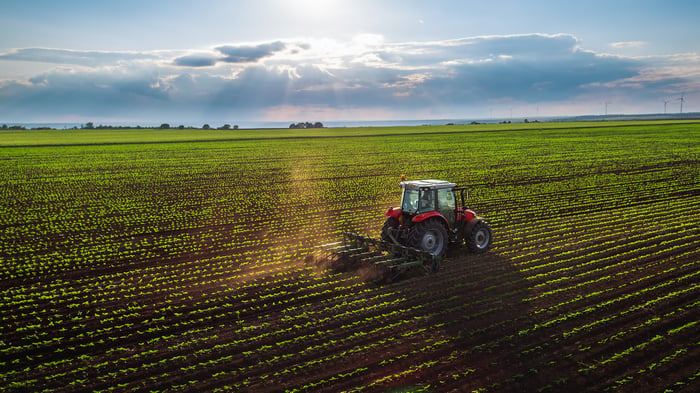 As is the case with just about every industry, there are way too many companies to list all at once. So let's eliminate a few. This list includes companies that are pure-play investments in agriculture, are listed on the U.S. Exchanges, and have market capitalizations greater than $300 million. I'm still leaving out a lot of potential companies, but this is a list to start with.

Source: Company investor relations pages and Ycharts. *Nutrien is the result of a merger between Potash Corp. of Saskatchewan and Agrium in 2017 and five-year data doesn't exist for the company.

No matter what business these companies have in the agriculture industry, all of them face the same challenges that make agriculture an incredibly important sector for years to come. Here are a few of the most important trends facing the industry.

When you tally these things up, consulting company McKinsey estimates that we'll need to increase our calorie production by 70% by 2050 on the same amount of, or possibly less, total arable land. That's going to be a monumental challenge that will require us to generate higher crop yields (more food produced per acre of land), and have more efficient food-supply chains.

We can divide the list of companies above into two neat categories: input providers and food producers and processors. Here's a look at the two, and which companies look most attractive.

Working behind the scenes

Source: Ycharts and Gurufocus. (EBIDTA is earnings before interest, depreciation, taxes, and amortization.)

Agricultural inputs such as seeds and fertilizers, and agricultural chemicals such as herbicide and pesticide, are incredibly valuable products for the industry. Combined, they all help to improve crop yields, which continue to be a critical challenge for the industry. At the same time, the market for these products acts very much like other critical commodities, like oil or minerals, that tend to move in a cyclical nature because of changes to the supply-and-demand dynamic.

There are a couple of advantages that companies in this part of the industry can leverage that other commodities cannot. For example, companies like Monsanto and Syngenta have patent protection on several of their seeds and agricultural chemicals, which give them some modicum of pricing power compared to more basic products like potash or nitrogen fertilizer. Or in the case of Scotts Miracle-Gro, a company can cater more to smaller retail customers and leverage other advantages, such as brand recognition. Selling to customers directly through retail networks was one of the driving factors behind the merger of Potash Corp of Saskatchewan and Agrium into Nutrien.

For companies that don't have these advantages, the only thing they can rely upon is keeping their production costs low enough to generate profits during the good and bad times of the commodity cycle. Terra Nitrogen Company is an excellent example of a company with low-cost production. The master limited partnership -- it's a subsidiary of CF Industries -- has a unique advantage in the nitrogen-fertilizer market because it creates its products using natural gas in the U.S. Thanks to the shale boom, domestic gas is one of the cheapest methods to produce nitrogen fertilizer, such as urea and ammonium nitrate. While the prices for those commodities have dropped precipitously over the past several years, Terra Nitrogen has continued to churn out high margins and high rates of return. 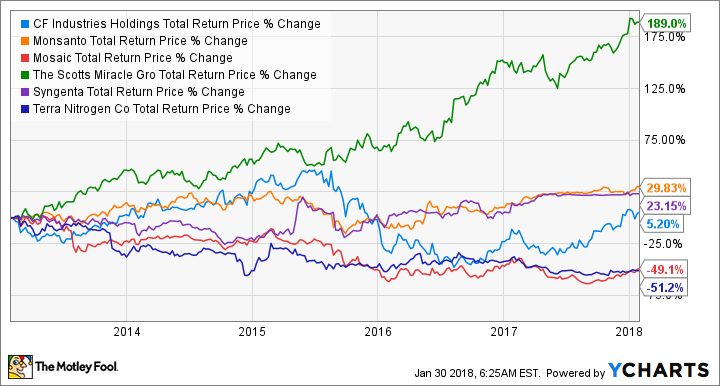 The two companies in this group that look most attractive as investments are Terra Nitrogen and Scotts Miracle-Gro. Scott's brand recognition and retail offerings give it pricing power that few companies in this business possess, and it also has a leg up in another booming agriculture business in the U.S.: hydroponics for marijuana. Terra Nitrogen's low-cost position in the fertilizer market, its squeaky-clean balance sheet, and its robust distribution to shareholders gives it a nod, as well. Monsanto would also be on this list, but German conglomerate Bayer is trying to acquire it, and the company may not be a U.S.-listed stock for much longer.

Here's something you always need to keep in mind when looking at any company in food production and processing. This industry is private-company Cargill's world, and everyone else just gets to play in it. Cargill's 2017 estimated revenue ($110 billion) was almost as much as all of the companies in this group combined ($128 billion). The company also has a hand in just about every component of food production and processing.

What that means from an investing standpoint is that no company can tout economy of scale as an inherent advantage because there's a company out there with even greater efficiencies related to scale. Instead, one advantage we'll focus on here is the creation of premium and consumer-facing products that give a business some additional pricing power from vertical integration and brand recognition.

While Archer Daniels Midland and Green Plains have several benefits from vertical integration and finding ways to create value from processing byproducts, the products they offer don't have the customer-facing component that can command higher margins. It's entirely possible that these companies' businesses will be more valuable over time, especially some of Archer Midland's investments in higher-value products. For now, however, there are better investments in this industry. 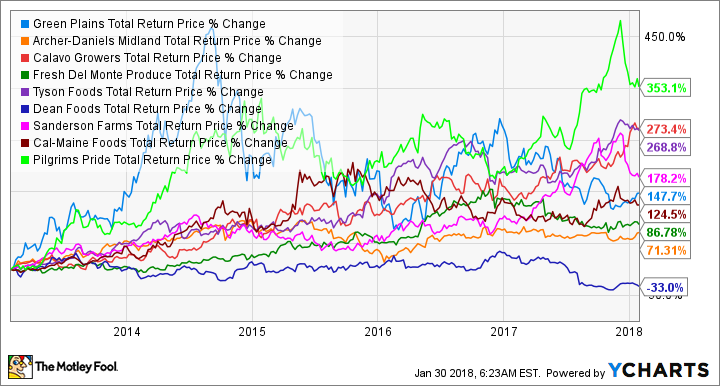 The three companies that stand out in this group are Tyson Foods, Cal-Maine Foods, and Pilgrim's Pride. While none of them have a dominant market share in their respective markets, they each have carved out a sizable market share. Also, all three have leveraged opportunities with organic meat and cage-free poultry that commands higher margins. Pilgrim's Pride and Tyson have also broadened their product offerings with a broader range of processed and pre-prepared proteins that also help differentiate it from most meat suppliers. Sanderson Farms could have easily made this list, but if you're going to invest in the poultry business, it seems to make more sense to go with the larger and more profitable Pilgrim's Pride.

The one thing that may look off here is Cal-Maine's precipitous drop in profitability last year. That's a result of egg prices getting cut nearly in half in 2017 as the market overcorrected from an avian influenza outbreak in 2015. However, egg prices have recovered quickly in recent months as that same sickness has hit other countries' hens and demand for eggs is at a multi-decade high That trend coupled with Cal-Maine's historically high rates of return suggest the company could make a rapid rebound.

What a fool believes

Investing in agriculture is similar to a lot of other commodity products. If a few companies bring too much supply to the market all at once, it can drastically change the price of that product and turn high-profit margins into losses in a flash. There are, however, some advantages, such as brand power and patents, to protect pricing that other commodity-related industries don't have.

Perhaps the most alluring part of investing in agriculture is the underlying trends we can expect over the next several decades. As a growing population, a shift to higher-calorie foods such as protein, and shifting climates put higher demand on our arable land to produce more food, we'll have to rely on technological advancements like advanced seeds, crop management, and more efficient processing to boost yields and overall production. Companies that can play on these trends could become excellent wealth-building stocks for your portfolio over time.