Please ensure Javascript is enabled for purposes of website accessibility
Log In Help Join The Motley Fool
Free Article Join Over 1 Million Premium Members And Get More In-Depth Stock Guidance and Research
By Maxx Chatsko - Sep 17, 2016 at 9:43AM

As the global population increases, the amount of quality arable land is decreasing. New technologies will be key to avoiding future food crises. 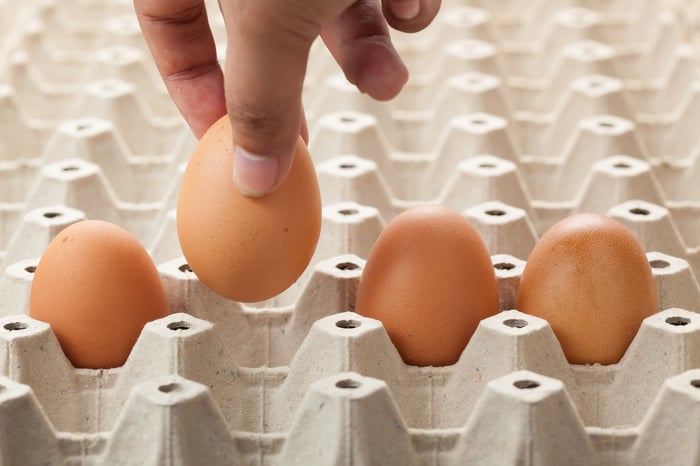 It was an event that generated relatively little fanfare outside of the investors affected, but it may enable one of the most significant acquisitions of the decade. In late August, the Committee on Foreign Investment in the United States, or CFIUS, announced that it had no objections to the pending acquisition of Syngenta (NYSE: SYT) by ChemChina, which sent the former's shares soaring over 10%. Now investors are only awaiting a decision by a similar (and perhaps stricter) panel in Europe for final approval.

Why does a regulatory body in the United States get to have a say in an acquisition between Chinese and Swiss companies? CFIUS weighs in on deals involving companies with significant domestic activity that may affect the long-term security of the nation, whether cyber security or food security. As Stephen McHale, a partner at Squire Patton Boggs, told The New York Times, "(CFIUS has) not yet reached the point where they have found an acquisition in the food and agriculture sector to threaten national security. It's a sign that the U.S. is very secure in its food supply."

That should hardly be surprising -- and the data back it up. The United States is home to 4% of the world's population and 7.5% of the world's arable land, which is also among the most productive on the planet. But the blessings of geography are not evenly distributed. While an abundance of food security made the panel's decision a ho-hum event in the United States, a lack of food supply makes the pending acquisition of Syngenta a significant event in the long-term trajectory of China, which is home to 19% of the global population but just 7% of the world's arable land.

If the deal goes through, one-fifth of the world's population will have access to yield-protecting and yield-boosting technologies that have not been available to the country's corn and soybean producers to date. It won't be enough to completely meet China's long-term food demand, but it marks a big step in the right direction. It also highlights why food security may be one of the best investments of the 21st century -- something America is uniquely positioned to capitalize on.

If you've followed any agricultural technology company or debate (hello, genetically modified organisms) in recent years, then you've probably heard some version of the following statistic: by the year 2050 (X) the global population will increase to 9 billion (Y). These numbers have become hot topics of debate, which isn't helped by the fact that they're usually held up to support the use of a particular technology at the center of yet another debate. Worst of all, demographic predictions have been among the least accurate predictions humans conjure up.

Arguing over the exact numbers of far-off projections may be fruitless, but focusing on the trajectory of current trends provides clearer insights to the importance of food security. Consider that:

In other words, in the last half-century the global population has increased by 122%, the amount of arable land per capita has decreased by 45%, and daily per capita food consumption has increased by 25%. That's quite the confluence of factors. The good news is that from 1961 to 2013 we've been able to produce the same amount of food from 68% less land and fewer inputs. Technology-driven agricultural intensification has been one of the most underappreciated stories of the last half-century. It needs to continue.

China as a case study

But even though the rate of each of these trends has slowed, their importance has not diminished, as perfectly illustrated by China. In recent years hundreds of millions of rural (agricultural) workers have migrated to cities, which have been built and expanded on cleared agricultural land. Exacerbating the land-use change problem, urban citizens consume more calories than their rural counterparts. In the next 15 years alone annual meat consumption per capita is expected to increase nearly 50%.

The country has made calculated moves to increase food security with investments overseas and within its own borders. Domestic companies have acquired Australia's largest dairy farm, acquired billions of dollars of soybean processing plants in Brazil, and invested tens of billions more in agricultural land from South America to Africa to Central Asia.

ChemChina's pending $43 billion acquisition for Syngenta could prove even more important. Only two genetically modified crops have been approved for planting by Chinese farmers: a cotton variety approved in 1996 and virus-resistant papaya approved in 2006. While differences in soil fertility and farming practices play a significant role, a lack of technology has resulted in significantly lower Chinese yields compared to biotech-protected American yields.

Data from 2013. Source: Food and Agriculture Organization of the United Nations.

How can the United States capitalize?

Current trends and recent events provide serious credence to the idea that food security will be among the best investments of the 21st century. What should you look for? Generally, investors should investigate opportunities that answer one simple question: What companies are developing technologies that boost output while reducing inputs? There are plenty of opportunities to investigate -- even if it isn't a major investing theme just yet.