Why the baby boom wasn't as obvious as it seems.

Predicting things is hard, but we keep doing it. Why? Because everything seems so obvious in hindsight, and since it does, we get the impression that predicting the future should be easy.

Last week I wrote about the most important news stories of the last 100 years that nobody would have thought were possible until they happened.

One was the baby boom -- a surge in births from 1945 to 1965 that influenced the country over the following decades in every way imaginable. If you had to make a list of America's most important developments during the 20th century, the baby boom would be in the top 10. And it was totally unpredictable.

Hold on, one reader responded: "The surge in the birthrate starting in 1945 was totally predictable given World War II."

This is a common story. It goes like this: The baby boom was predictable because the war didn't prevent people from wanting to start families; it simply postponed that goal, so a surge in birthrates was imminent after soldiers returned home.

But only in hindsight is this story obvious. The Department of Commerce wrote a report in 1948 called "Forecasts of the Population of the United States." It's 120 pages of numbers and charts written by the country's best demographers predicting what America would look like from 1945 to 2000. The report was written after the end of the war, and there was no forecast of a baby boom, let alone a massive one lasting 20 years.

What's more, the report's projection of total U.S. population wasn't just a little off; it was disastrously, off-the-charts wrong. The baseline 1948 forecast predicted 163 million people would live in America by the year 2000. In reality, it was 282 million. That difference -- 119 million people -- is the equivalent of missing three Californias, or 14 New York Cities. 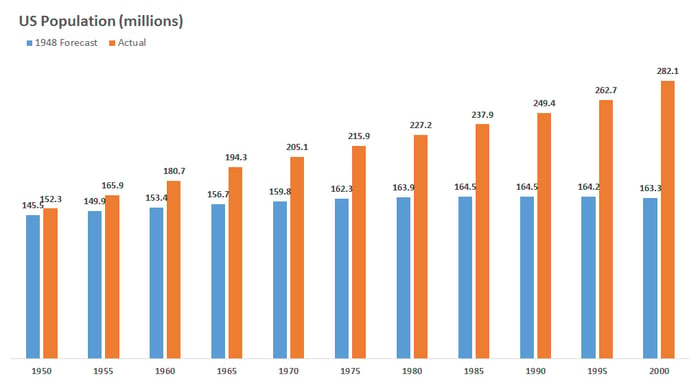 The demographers wrote in 1948: "There is a strong possibility that within a few decades the population will reach its maximum size and will begin to decrease." In reality it has increased every year.

Here's the report's birthrate forecast. There are three projections: high, medium, and low fertility. (It's per 1,000 woman, so a level of 3,000 indicates an average woman having three children by age 50.)

There's no prediction of a baby boom. Even the "high" forecast assumes the birthrate would fall after the war and then flatline. 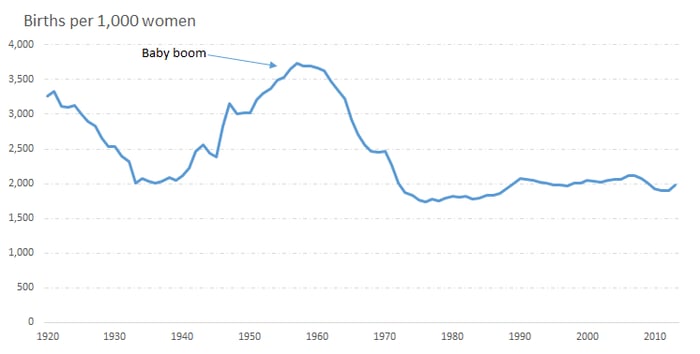 The baby boom birthrate was about 50% higher than even the "high" forecast predicted.

This made a huge difference. There were 2.9 million U.S. births in 1945, and the annual birth rate rose sharply until 1959, when 4.3 million Americans were born. Failing to predict the baby boom meant underestimating annual births by about 1 million for two decades.

Why didn't the demographers predict a baby boom that now seems to have been preordained?

Probably because there was no boom after World War I, which was the best comparison for what to expect after World War II. In fact, fertility fell after the end of the first war from 3.3 children per woman in 1917 to an average of 2.9 in the 1920s.

Other countries had small baby booms after World War II that quickly fizzled. Japan had a massive baby boom in the years just after the war, but birthrates quickly plunged and stayed low for decades. Tokyo-based journalist Eamonn Fingleton once wrote:

Could the same have happened in America? Japan was reduced to rubble after the war, but America had its own risk: The consensus view at the end of the war was that the U.S. economy would fall back into the Great Depression. In 1947 the Council of Economic Advisors sent a report to President Truman warning of "a full-scale depression some time in next one to four years." Nothing like that actually happened, but if it had, you can be assured it would have discouraged millions of families from having more kids. And if you were a demographer in 1948 trying to predict future birthrates, forecasting a deep depression would have drowned you in pessimism.

The demographers got other things wrong that derailed their forecasts. The Great Depression and wartime visa restrictions kept immigration extremely low during the 1930s and '40s. Unsure how long those trends would last, the demographers wrote, somewhat shockingly (emphasis mine):

It seems more probable that immigration will either be negligible or continue on a small scale than that it will increase substantially. In consequence, the basic series of population projections for future years are made on the assumption of no net immigration.

The point here is realizing how susceptible we all are to the narrative fallacy -- that is, our desire to tell a simple, clean story about why something happened, even if reality is far more complicated and uncertain. In hindsight it's easy to say that the baby boom was obviously predictable. In reality it was far from certain, and several other scenarios could have played out.

Everyone falls for this fallacy. I do it all the time. Life makes more sense when we can explain what just happened in simple stories -- but that doesn't make us better at predicting what comes next.