Food and specialty ingredients manufacturer TerraVia (NASDAQ:TVIA) has been relatively quiet since changing its name and ticker symbol from Solazyme, which spawned the current technology platform and business relationship with joint-venture partner Bunge, in May. While investors may always want more news and updates, the self-induced quiet period was needed for the company to focus on its transition away from fuel and industrial markets toward higher value markets that are more likely to deliver capital-efficient growth sooner.

Of course, the company did pick its head up for a brief time this week to discuss second-quarter earnings with shareholders. Growth was lackluster, but a new CEO was announced. Can investors pin their hopes on the new leader?

You can check the press release for the full financial details, but here are the important metrics for investors to focus on.

These numbers and year-over-year comparisons are a bit complicated for a couple of reasons that are worth understanding before panicking. First, the second quarter of last year includes product revenue from industrial products including fuels and drilling lubricants, while the most recent quarter does not. Second, the loss of industrial product revenue masks the relative strength of youthful food ingredient brands that grew nearly 200% in the comparison period. They grew from very small bases, but the growth is encouraging, given their new importance in TerraVia's future.

Compared with the first half of 2015, during the first half of 2016 sales of food ingredients grew 170%, joint venture products grew 290%, industrials products slipped 80%, and Algenist remained flat. The turnaround won't happen overnight, but investors have little to complain about concerning the current strategy.

Importantly, TerraVia continues to slash operating expenses, mostly from a major reduction in headcount at the end of 2015, and has a respectable amount of cash in the bank. But it's better than it seems. Not only do the aforementioned numbers not include a $20 million payment from Tengram for a majority interest (80%) in the company's cosmetic skincare line, Algenist, but going forward the company will avoid between $10 million and $15 million per year in marketing expenses related to the brand. That will help to further conserve cash and expand the company's runway before it needs to raise more funding for growth.

Some investors may be wondering why TerraVia parted ways with a majority stake in Algenist for only $20 million to Tengram. Isn't it a high-flying brand growing year after year? Doesn't the future potential represent revenue totals much greater than where the brand sits today? As always, it's a bit complicated, but the numbers have shown that Algenist was having problems growing for quite a few quarters. That's not to say that the brand is done growing, but whatever Solazyme/TerraVia was doing simply wasn't working. 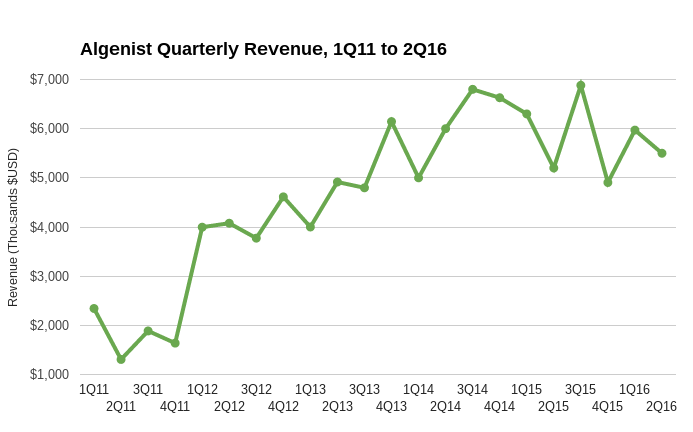 Therefore, it simply made sense to sell 80% of the brand to a group that has the potential to continue growing it. Solazyme will still supply the key algae ingredients for Algenist products to Tengram, but that shouldn't amount to more than a few million dollars per year at current revenue levels.

With Algenist on its way out, the most significant direct consumer brand now is Thrive culinary algae oil. Good news: Retail unit sales were up 200% in the second quarter, compared with the first quarter of 2016, while TerraVia is planning to expand the brand's retail footprint by 300% in the third quarter to more than 200 stores. Again, while the brand is growing from a very small base of revenue, it does appear to have traction. It's now the dominant cooking oil I use at home, but, admittedly, I'm far from a chef whose opinion holds sway.

The most significant update from TerraVia was, of course, the announcement that the search for its next CEO was over. Co-founder, Chairman, and current CEO Jonathan Wolfson will step down at the end of August while retaining his role as chairman of the board. At that time, Apu Mody will become the new CEO. Mody's most recent position was president of Mars Food America, where he turned the North American region into the company's fastest-growing segment. He has also served in important roles at Del Monte Foods, Procter & Gamble, and the Grocery Manufacturers of America.

Put another way, Mody has the experience and network needed to give TerraVia brands the exposure and opportunities required for growth. Those brands now include AlgaWise oils (a joint-venture product), AlgaVia whole algae ingredients, Thrive culinary oil, AlgaPrime DHA aquaculture and animal feed, and AlgaPur specialty ingredients. That's not a bad bunch to pin growth prospects on, although it certainly won't be easy.

TerraVia has a great portfolio of high-value food and specialty ingredients that could grow into a profitable, cash-generating company. It's important for investors to realize that the transition will take time -- as in several years -- and that even if the new company proves successful, the baggage of past mistakes does limit management's degrees of freedom. That could affect the decisions made to finance growth and the ability to acquire synergistic brands and technologies, and it could also result in dilution for existing shareholders. For now, it's simply too early to say how this will turn out.