Years ago, TerraVia (NASDAQ:TVIA), then named Solazyme, launched on the public markets with a successful IPO and ambitious plans to sell renewable fuels derived from microalgae oils. The fuels market is measured in billions of gallons and trillions of dollars. Of course, the size of the market is inversely related to the value of the product, and fuels are among the lowest-value products a chemical company can manufacture. Investors and entrepreneurs learned that the hard way.

As a result of its own learnings, TerraVia pivoted its way up the value chain, targeting commodity chemicals such as palm oil, then drilling lubricants, then food ingredients. The latter seemed to be in the sweet spot on the Venn diagram of market and value: a relatively large market with relatively high selling prices. Unfortunately, the last pivot may have come too late.

With the release of its first-quarter 2017 financial results, TerraVia disclosed that it has been reviewing strategic options as part of its debt restructuring agenda. A separate SEC filing details a plan that includes the possibility for selling part, or all, of the company by June 28. It may not be the outcome individual investors wanted to see, but it may be the best way to allow the technology platform to live on. Here's what investors need to know. 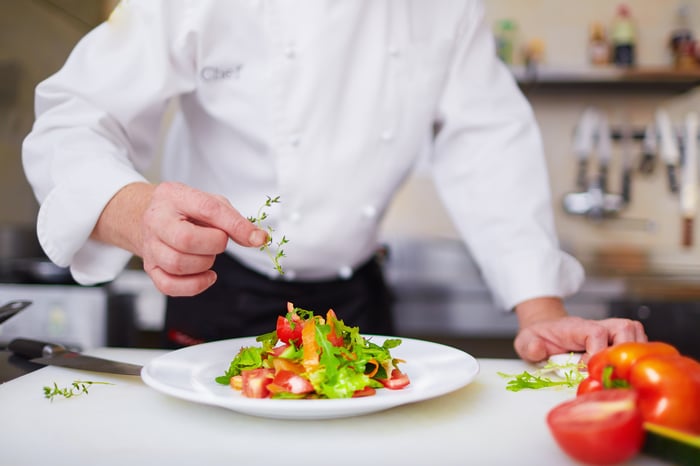 This year is one of transition for TerraVia, which means the financial progress achieved won't be likely to blow investors away. But the numbers below tell a different story:

This is the third consecutive quarter with abysmal product revenue. That's mostly because TerraVia is focusing on selling products within its unconsolidated joint venture with Bunge. The good news is that the growth there is encouraging, especially (according to CEO Apu Mody) for the AlgaPrime DHA fish feed product. It just doesn't appear to be happening fast enough to pull the company out of its rut, which can be more accurately defined as its financial obligations.

For investors who have kept up with SEC filings -- not all of which are accompanied by a press release -- TerraVia announced in April that it would not make a mandatory interest payment on its 2019 debt notes on April 3. Instead, it would rely on a 30-day grace period to make the payment.

On the day it announced first-quarter 2017 financial results, the company submitted another SEC filing detailing progress on its debt restructuring efforts. It has entered into a forebearance agreement with the holders of many of its 2019 debt notes that ends on June 28. Between now and then, TerraVia will either attempt to restructure its debt or sell part or all of its business.

There's no way of knowing what will happen, but management is preparing for all possible outcomes. R&D expenses are down sharply in the last several quarters, which show that TerraVia is focusing on the few products it has rather than investing in a future pipeline. Operating expenses are also down sharply, which is good for a company that's in survival mode or is attempting to make itself more appealing to a potential suitor.

A complete sale may be more difficult than investors realize. At the end of March, TerraVia had shareholders' equity of negative $77 million, meaning that it held more debt than assets. That makes it likely that the business will be sold in pieces, such as the manufacturing facility in Moema, Brazil; the aquaculture feed portfolio; or the culinary oil brand. Of course, selling the company now may be the best possible ending to the story. The alternatives are lumbering in "zombie mode" for a few years and betting against the difficult odds now facing the company, or eventually declaring bankruptcy. A sale would give the technology platform the best possible chance of surviving in the market, even if it is slim.

TerraVia told investors that 2017 would be a year of transition. While the products within the JV are showing progress, it may not be happening quickly enough to bail out the company from its dire financial situation. Long story short: Scaling technology is difficult, and scaling biology even more so. Investors in the field would be wise to keep this in mind. For TerraVia, for now, the deadline of June 28 looms large.