It may be one of the most important global growth trends of the 21st century. Start-ups across the globe are writing business plans around the opportunity. Big businesses are joining forces to launch new products and capture market share. Aquaculture may not be on your investing radar, but several partnerships are eyeing the 30 million metric ton per year fish feed market as a source of long-term growth.

Specifically, companies such as TerraVia (NASDAQ:TVIA), Intrexon (NASDAQ:PGEN), and Darling Ingredients (NYSE:DAR) have developed next-generation inputs that will reduce the impacts fish farms have on the planet while increasing the value created by aquaculture. Low-impact inputs solve an important problem for the industry, especially considering that the impacts are really beginning to add up. 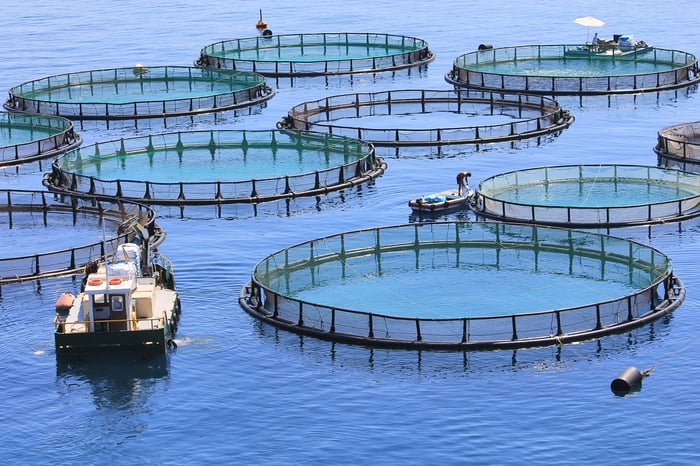 The problem with aquaculture

The emergence of obstacles to aquaculture are hardly surprising. The amount of fish and shrimp captured from the world's wild fisheries has essentially plateaued since the mid-1990s, but we've kept pace with growing consumer demand by turning to aquaculture, as illustrated by the chart below from the Food and Agriculture Organization of the United Nations. 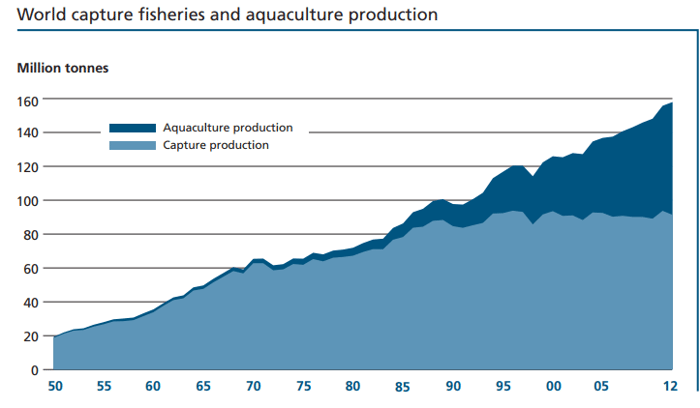 Image source: FAO, The State of World Fisheries and Aquaculture 2014.

That's an amazing chart, but the trend isn't sustainable for much longer if the status quo holds. Farmed fish require a long list of nutrients that result in a 30 million metric ton per year global fish feed industry. Depending on species, these nutrients are primarily provided by agricultural proteins (corn, soy) and/or fishmeal and fish oils (byproducts from harvesting fish).

The former evokes the age-old "food vs. X" debate. The latter relies heavily on reduction fisheries, which produce fishmeal and oil from wild fish catches. While such facilities represent up to 30% of global fisheries volume, according to the National Oceanic and Atmospheric Administration (NOAA), catch volumes are heavily regulated and dependent on the replenishment of wild stocks. These factors have limited supply at exactly the wrong time: when demand is soaring.

NOAA reports that "one pound of farmed salmon uses the fish oil from about five pounds of wild fish" and "fish meal from 1.3 pounds of fish". When combined with limited supply of fishmeal and oils and the quickly growing volumes of aquaculture harvests, it's no wonder the industry is confronting rising fish feed prices and in dire need of alternative protein and oil sources.

Insect larvae to the rescue

Intrexon says there are no remaining technical hurdles to the technology platform (some minor regulatory issues need to be addressed), which awaits only an industrial manufacturing facility before products can hit the market. Darling Ingredients will help build out the infrastructure and provide the marketing and distribution muscle to get the product launch off on the right foot. Currently, Intrexon's only major source of product revenue comes from its cattle breeding and genetics platform, while Darling Ingredients has made it a focus to invest in new, high-value markets. Enviroflight could be a major catalyst for both companies in the years ahead.

Insects may represent one of the most efficient protein sources, but microbes at the heart of industrial biotech platforms aren't far behind -- and multiple microbial protein products launched in the last two months. Microalgae food ingredients manufacturer TerraVia and its JV partner, Bunge, announced the launch of AlgaPrime DHA for aquaculture markets in May. That was followed by the announcement of a supply deal with BioMar Group in June, which is one of the world's largest aquaculture input suppliers.

The product is a superb source of protein (13% by mass) and oils (53% by mass), especially DHA, the main fat provided by traditional fish oils. TerraVia and Bunge also employ an efficient and sustainable manufacturing process that feeds microalgae sugar from sugarcane to create AlgaPrime DHA in a 100,000 metric ton per year facility in Brazil, although other products are manufactured at the site. 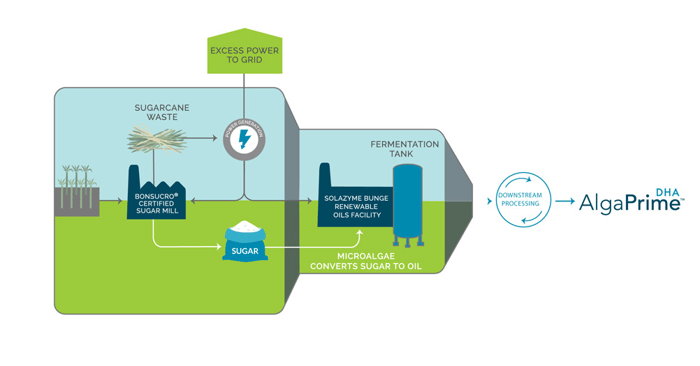 TerraVia has hit a few major obstacles in manufacturing and market traction in recent years, which supported the recent pivot to focus exclusively on food and specialty ingredients. The manufacturing setbacks have pushed back the timeline for fully consolidating the JV with Bunge. That may reduce the short-term significance of AlgaPrime DHA on the company's stock, but it represents an important long-term growth opportunity nonetheless.

The opportunity at hand has caught the attention of other industrial biotech companies. Archer Daniels Midland and Synthetic Genomics have a partnership that parallels the one from TerraVia and Bunge: using microalgae to create DHA for aquaculture within an industrial biotech platform. In June, the pair announced the launch of their product, DHA Natur, which contains up to 20% DHA and is approved for use in the European Union and Chile.

Meanwhile, the privately owned industrial biotech Calysta wields a commercially viable gas fermentation platform for producing BioProtein, an aquaculture product that has been approved and studied in the European Union for over 10 years. A fully dedicated 80,000 metric ton per year facility will be online in late 2017 or early 2018.

Aquaculture represents an important production system for fish and seafood, but the growing demand for protein inputs puts natural ecosystems at risk. Luckily, the market is responding with innovative and efficient products that can help to reduce the impact of aquaculture on the planet. There are many companies getting involved -- and many more that will likely toss their hats into the ring -- but Intrexon, Darling Ingredients, and TerraVia should be at the top of investors' watchlists when following developments in the industry.