A bombshell report published by Bloomberg could have major implications for investors. 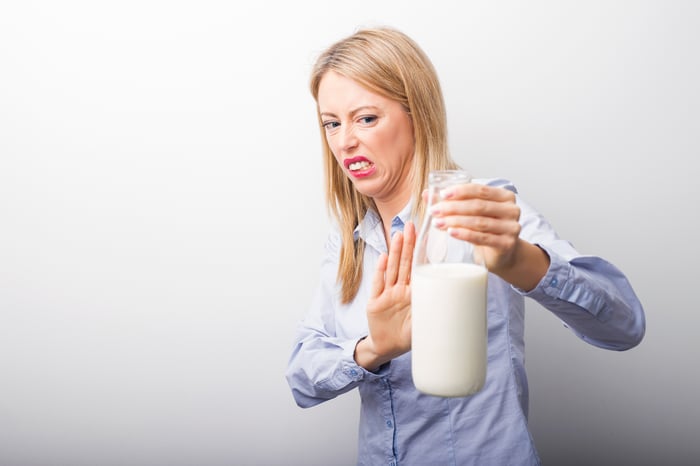 When Silicon Valley-based Soylent reformulated its mixed powder meal replacement drinks in the summer of 2015, it included an intriguing new ingredient: algal flour. That provided a major vote of confidence that microalgae ingredients manufacturer Solazyme's product pivot -- away from low-margin industrial ingredients and toward high value food and feed ingredients -- was being verified in the market by real customers. The company has since changed its name to TerraVia (TVIA) and doubled down on working its way into product formulations for food brands large and small with algal flour and algal protein -- "no compromise" vegan alternatives to ingredients traditionally sourced from dairy products.

But the enthusiasm began fading this summer when Soylent, fresh off the launch of an improved version of its meal replacement drink and a new protein bar, encountered reports that customers were becoming ill after consuming the company's products. That forced the company to halt sales of the powder mix drink (not its premade drink product) and recall its protein bars last month.

That alone would have an obvious impact on Soylent's sales and those of its ingredient suppliers, but the news appears to be far worse for TerraVia. A Bloomberg article today reported that Soylent believes TerraVia's algal flour ingredient is causing its customers to become sick and will be removing the ingredient altogether from its product formulations by early 2017. That's terrible news for investors -- and it appears to get worse still.

While senior vice president Mark Brooks adamantly denied that algal flour was the culprit, the Bloomberg report revealed that TerraVia had sent a letter to a separate customer in July warning that its algal protein ingredient had been linked to a "modest number of reports" showing similar ailments reported by Soylent customers, namely nausea and vomiting. The recipient of that letter, Honey Stinger, told customers in May to return or throw away protein chews that contain TerraVia's algal protein.

The fact that two different ingredients in two different products are being linked to similar issues doesn't bode well for TerraVia. It strongly suggests that there's either:

If either of the above is true, then TerraVia can expect a visit from the U.S. Food and Drug Administration to its food ingredients manufacturing facility. The latter would be a best-case scenario because it implies that the issues can be addressed and corrected.

It's possible that another ingredient not being supplied by TerraVia is causing customers of two different brands to become ill. Brooks told Bloomberg, "Our algal flour has been used in more than 20 million servings of products, and we are aware of very few adverse reactions. In no cases was algal flour identified as the cause." Since algal protein and algal flour are new ingredients, brands had to reformulate their products to include them. If other ingredients were added along with those from the microalgae supplier, then those could be triggering illness in some customers. But the circumstantial evidence doesn't look good.

In addition to two different ingredients being linked to similar side effects in two different products and the warning letter sent from TerraVia to Honey Stinger, there's the precipitous 68.5% drop in product revenue that occurred during the third quarter of 2016 compared to the year-ago period. And that's after the top line was adjusted to exclude sales of the company's former cosmetic brand, Algenist, which was divested in August. The unusual drop, with little explanation from management, could make more sense now. If the company was worried about safety issues with its ingredients, then it could have voluntarily halted sales while it figured out what was going on.

Of course, that leads to another problem for the company. Investors should be disappointed that they have to learn about potential safety issues with the company's food ingredients through a Bloomberg article, not directly from management. TerraVia announced third-quarter 2016 earnings last week, which would have been an opportune time to disclose a warning letter sent to a customer in July -- seemingly relevant information for investors. Unfortunately, this is not the first time management has been opaque about investor-relevant issues occurring behind closed doors.

The news is certainly not good, but at this time, investors need to hear from TerraVia about the allegations and potential side effects reported to a customer in July. It does appear that the company is encountering manufacturing-related issues that need to be -- and importantly, can be -- addressed. How potential safety issues affect the company's brand moving forward is difficult to assess right now.

There's a sliver of hope for investors: TerraVia is diversified into markets unaffected by potential safety issues for human food ingredients. That includes high-protein fish and animal feed and personal care ingredients that aren't ingested. The problem is that sales of those products are held within an unconsolidated joint venture that, while improving, seemingly isn't close to achieving the performance needed for TerraVia to consolidate financial results onto its income statement.

That said, given the long road to profits and growth before news about its food ingredients was reported, this could have serious implications for TerraVia and its investors.

Editor's note: A previous version of this article referred to energy bars rather than protein chews. The Fool regrets the error.