Please ensure Javascript is enabled for purposes of website accessibility
Log In Help Join The Motley Fool
Free Article Join Over 1 Million Premium Members And Get More In-Depth Stock Guidance and Research
By Maxx Chatsko - May 18, 2016 at 6:07PM

Monsanto has developed some of the most innovative product platforms in the industry through acquisitions and in-house development. On the cusp of commercialization, why sell now?

Last week, news broke that Bayer had made a $40 billion offer for agricultural technology leader Monsanto (MON). That figure represented only a 10% premium to the company's market cap at the time and remains significantly lower than the $60 billion value assigned by the market before commodities prices tanked in late 2014. But you know what they say: "Buy low." 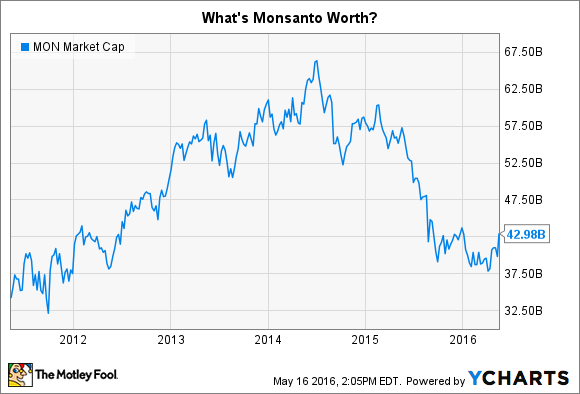 It may be impossible to determine the true value of Monsanto, or any large and growing company, but I'm pretty confident it's substantially more than $40 billion. The company boasts some of the most innovative new technology platforms in the industry that look to move beyond new pesticide approvals, which is where most competitors (desperately merging with peers) are eyeing growth for the foreseeable future. Instead, Monsanto is looking to leverage advances in genomics and data -- what launched the company to a leadership position in the first place -- to power future operations. All it takes is a brief look at several of the leading R&D projects to be insulted by Bayer's $40 billion offer.

In 2013, Monsanto purchased The Climate Corporation for $1 billion to get its hands on the start-up's data collection and processing capabilities. Now combined with the internally developed Integrated Farming Systems platform, powered by FieldScripts software, the platform gives farmers access to the Internet of Things for agriculture. Really.

The digital ag platform offers farmers insights into planting, fertility, yield impacts, and more with integrated use between other machines and third party apps. That includes a precision planting collaboration with John Deere. Farmers can run automated scripts from their combines for optimizing seed distribution or variable rate nitrogen applications. Advanced imaging and yield analytics can be used to estimate yields and alter strategies for future harvests.

The freemium business model eclipsed over 5 million acres of paid services in the United States and 75 million active acres in 2015, which is expected to grow to 12 million acres and 90 million acres, respectively, in 2016. Considering the platform launched with only hundreds of thousands of paid acres in 2014 the demonstrated traction is pretty encouraging for investors. Better yet, these numbers only represent domestic use. Monsanto recently announced that it will expand in-field beta testing in Brazil next year with the first product launch expected in the next two years.

There are two platforms currently wrapped up under the blanket term "biologicals." The first is the BioAg Alliance with leading enzyme manufacturer Novozymes, which aims to enhance the plant microbiome to boost yields and protect against certain pests by enhancing root health. By providing inoculants of beneficial soil microbes that are coated onto seeds, BioAg products allow farmers to capture yield increases of up to 8% for corn and 7% for soybeans. Monsanto and Novozymes estimate that, at worst, farmers realize a return on investment of 199% and 139%, respectively. The platform is expecting state regulatory approvals to pave the way for commercial launch in 2017.

The second biologicals platform is BioDirect. It's a bit more controversial than other agricultural products because it employs RNAi technology to tap into natural processes within plants and insects. In theory, RNAi disrupts species-specific biological functions, although some scientists aren't sure we can utilize the technology in the field without accidentally affecting other organisms. While risks can be mitigated, there's really no way to provide full assurances. (Is there ever?) But the potential benefits are certainly intriguing. Monsanto hopes to deploy BioDirect biopesticides to control viruses ravaging honeybees, beetles devastating canola and potato crops, and even herbicide tolerant weeds, among other things. In other words, "Monsanto Saves America's Honeybees" could be a real headline for BioDirect's first commercialized product later this decade.

Root health is the focus of another innovative product platform from Monsanto: Nemastrike. The nematicide (yes, add that to your pesticide vocabulary) has been found to boost corn and soy yields by 9 bushels and 2 bushes, respectively. It works by targeting nematodes, tiny worm-like animals that feed on plant roots, and can target a wide range of species. Better yet, one application works to reduce emergence later.

Monsanto plans to launch Nemastrike in 2018 with a corn-focused product and follow up with a solution for soybeans, although other crops could also benefit from the technology. The company has set a goal of covering 125 million acres by 2025, which represents a net present value greater than $1 billion, according to internal estimates.

Each of the technology areas identified here have at least one product portfolio capable of generating $1 billion in annual sales. These platforms represent a crucial driving force behind Monsanto's strategic plan for growing income and EPS through the end of the decade. Bayer is right to be interested in the company's future growth potential in a consolidating industry, but $40 billion is, simply put, an insulting offer. If I were Monsanto's management team I would not follow the industry's knee-jerk merger parade. Instead, I would continue to weather out short-term commodity prices and keep my eyes on the long-term opportunities in front of the company.