By now, you've probably heard that chip giant Intel (NASDAQ:INTC) made waves in the tech space earlier this week by announcing a deal to acquire Mobileye (NYSE:MBLY).

The deal is noteworthy for a number of reasons, least of which is the dollar value involved. Intel is paying $15.3 billion for a relatively small company in what amounts to a shot across the bow of NVIDIA, the current leader in driverless car chips. However, this deal carries deeper implications for the semiconductor industry, so let's look at why Intel is buying Mobileye and what it means for the parties directly and indirectly involved.

Intel and Mobileye: A winning pair?

Superficially, the deal seems like a match made in heaven. Intel's long-standing growth issues in its PC and data center segments are well-known. Moreover, its failure to capitalize on the once-in-a-generation growth opportunity presented by the rise of smartphones and tablets likely left the company anxious not to miss the boat the next time around. The autonomous vehicle market looks like a similarly major opportunity for the company.

In that vein, adding Mobileye suits Intel's aims. Mobileye already enjoys partnerships with 25 automakers to install its Advanced Driver Assist System (ADAS) into their vehicles. It also has experience working with Intel, and reports indicate that the cultural similarities of the two companies were an important factor that helped facilitate the deal. Intel and Mobileye are currently working with BMW to help the automaker develop fully autonomous vehicles and bring them into wide-scale production by 2021 at the latest.

However, the deal also involves at least one meaningful downside that investors need to understand. 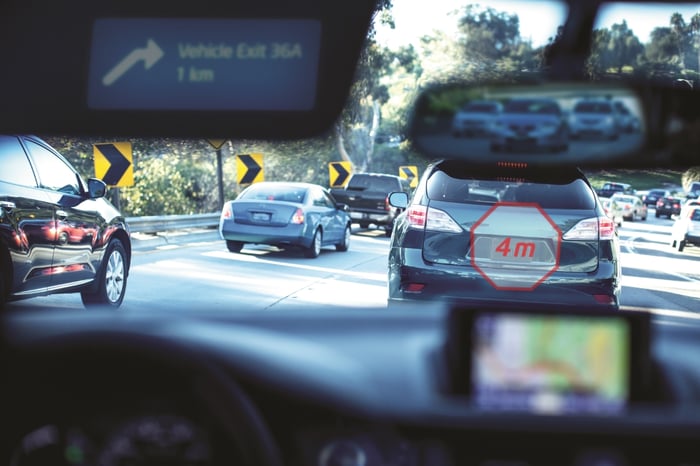 As is the case with so many things, there was some give-and-take at work in Intel's Mobileye buyout. Of its possible flaws, by far the most glaring is the valuation Intel put on the target. Though the long-term results could eventually validate it Intel paid a steep price to get this deal done.

Mobileye generated GAAP net income of just $108.3 million on sales of $358.1 million in 2016.  At the agreed-upon price, this means Intel valued Mobileye at either 42 times sales or 141 times earnings. For those scoring at home, the S&P 500 currently trades at about 26 times earnings,  which itself is well above its historic average.

Time will tell whether this deal works out for Intel shareholders, but Intel hasn't enjoyed a lot of success with large-scale acquisitions in the past.  Its particularly garish $7.6 billion  buyout of security firm McAfee in 2011 has done little to lift the chipmaker's financial fortunes; the jury remains out on its 2015 buyout of Altera for $16.7 billion.

Perhaps the best way to sum up this move is that it's a gutsy, all-in bet on the future of self-driving cars and Intel's place as a major component supplier to the market. In that vein, Intel CEO Brian Krzanich said that autonomous vehicles will represent a potential $70 billion addressable market by the year 2030.  Beyond that, Intel believes that supporting self-driving cars will require a large amount of additional data center, network security, and cloud computing hardware -- and it sees a $30 billion economic opportunity for the company in supplying chips to power those systems.

If all of this comes to pass as predicted, Intel will eventually recoup far more than the $15.3 billion it is spending. So though it comes at a hefty premium, Intel's aggressive purchase of Mobileye is the kind of potentially transformative bet this low-growth tech giant needs to make if it intends to remain relevant over the next 20-plus years. Here's hoping it works out.