Mobileye N.V. (NYSE:MBLY) shares rose sharply at the market's open on Monday. They've stayed high: As of 12:30 p.m. EDT, shares of the Israeli maker of advanced driver-assist systems were trading at $61.14, up over 29% from Friday's closing price.

Chip giant Intel Corporation (NASDAQ:INTC) announced on Monday morning that it had come to an agreement to buy Mobileye for $15.3 billion, or $63.54 per share. It's a friendly transaction that values Mobileye at an astounding 141 times its 2016 net earnings of $108.4 million.

That's a steep-sounding price, but Intel is betting that it will look like a steal in a decade or so. Mobileye is extremely well positioned to be a major player in the coming world of self-driving cars and trucks, with a dominant market position in a key technology -- chip-based camera systems -- and deep, established relationships with most of the world's big automakers and several of the biggest auto-industry suppliers. 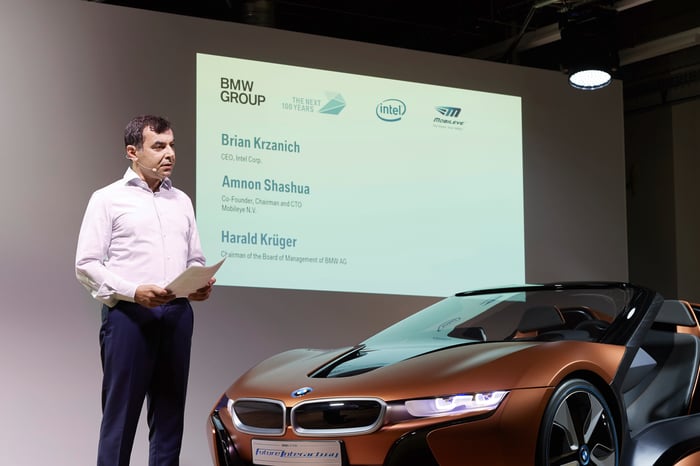 Simply put, Mobileye gives Intel VIP-level access to the auto industry. That can be a tough door for a tech company to open. But it's a natural fit for Intel: Its processors and cloud solutions provide the computational horsepower that will be essential for self-driving vehicles and the data centers that will support them. Intel CEO Brian Krzanich estimates that the total addressable market could be $110 billion by 2030, and the deal puts Intel in a prime position to capture a lot of that business. 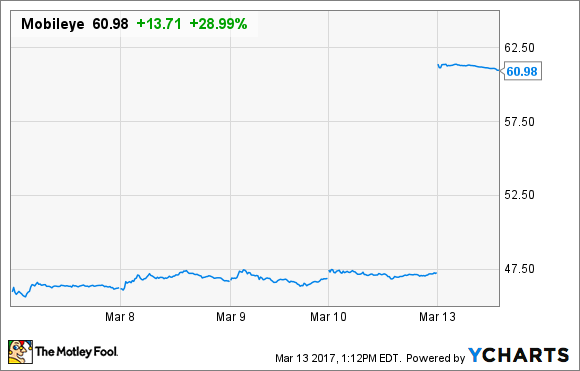 Importantly, the acquisition appears to be a good cultural fit. Intel and Mobileye have both participated in a couple of self-driving partnerships for most of the last year, and the companies have discovered that they work well together. Mobileye's co-founder and chief technology officer, Amnon Shashua, will stay on to effectively run the technical side of Intel's self-driving effort, reporting directly to Krzanich.

The deal has already been approved by the boards of directors at both companies. It will have to be approved by Mobileye's shareholders, and by several sets of regulators, but those aren't likely to be insurmountable hurdles. The companies expect the deal to close before the end of 2017.