Mobileye will use cameras on a growing list of automakers' cars to build maps for self-driving vehicles.

Mobileye N.V. (MBLY), an Israeli company that specializes in advanced driver-safety systems, has begun rolling out a new offering that will help the self-driving cars of the near future function in more areas -- and your next new car might be enlisted to help.

The new offering, called Road Experience Management, or "REM," is a system that will create highly detailed maps that self-driving cars can use to back up (or double-check) the inputs from their sensors. It will use data collected by cameras on many new cars, starting with the 2018 model year.

This is a big deal, not just for Mobileye but also for its customers -- which include nearly all of the world's automakers -- and people who are hoping to have access to self-driving cars in the near future. 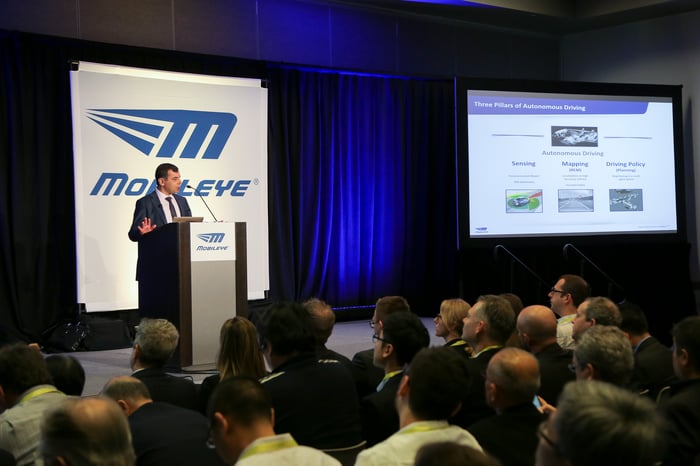 When the first fully self-driving cars arrive on the market in a few years, their capabilities will be limited. In most cases, the cars will be "geofenced," restricted to driving in particular areas. (In the widely used industry nomenclature, these are called "Level 4" systems. "Level 5" systems that are self-driving with no restrictions are probably still many years away.)

The cars will be geofenced because most of the self-driving systems under development require specialized high-definition maps to work safely. The maps help the car's "brain" figure out exactly where it is relative to things like curbs and road barriers, providing a layer of redundancy beyond the car's sensors. (That may sound, well, redundant. But it's critical to ensuring that self-driving systems meet the required standards of safety.)

Obviously, the companies that can access the best and most extensive maps will have a competitive advantage. Cars equipped with their systems will be able to drive themselves to more places. That means that the race is on not only to create maps covering the widest possible areas, but to create ways to ensure that the maps are always up to date.

Mobileye has a direct stake in this race. It's gearing up to bring a Level 4 system to market by the end of 2019, in partnership with Delphi Automotive (DLPH) and Intel (INTC 0.39%). That system will be marketed to automakers, who will probably be able to have it in showrooms (or in service with ride-hailing companies) by about 2021. 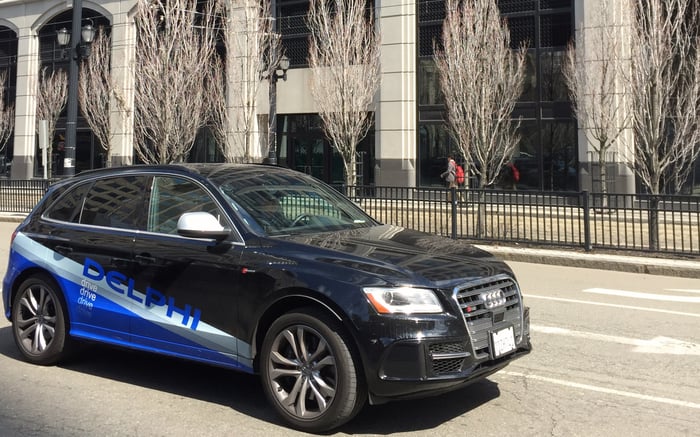 This self-driving test vehicle incorporates a prototype of the system being developed by Delphi, Mobileye, and Intel. Image source: Delphi Automotive PLC.

Mobileye's Road Experience Management initiative is intended to make sure that its Level 4 offering is as complete, and as compelling, as possible. And your next new car might help.

How Mobileye will build -- and profit from -- the maps

The idea behind REM is that Mobileye can use the cameras on existing cars as a low-cost way to harvest the data needed to make the maps, as well as other information that will be useful to self-driving cars. Many new cars have front-facing cameras that are used for adaptive cruise control, lane-departure warnings, and other advanced driver-assist systems (or "ADAS") -- and many of those camera-based systems were sold to the automakers by Mobileye.

In recent months, Mobileye has been reaching out to its automaker clients, inviting them to join the REM effort by allowing data from their vehicles to be collected. In exchange, Mobileye is offering a share of the revenue it expects to generate from selling that data to mapmaking companies.

So far, Volkswagen AG and BMW AG have signed up to allow REM to gather data from their vehicles, starting in the 2018 model year. During this past week's earnings call, Mobileye's CTO Amnon Shashua said that his company expects to announce a third deal within a few weeks, and to have the majority of its automaker partners signed up by the end of 2017. (These deals include extensive privacy safeguards; the data won't be linked to specific car owners.)

Shashua explained how revenue will be generated from the REM effort:

We believe revenue will be generated from two separate products [of REM]. One is the map, which is a critical input to autonomous vehicle systems. The other is a broad set of real-time dynamic information such as traffic density, weather conditions and open parking spots. We expect the primary customers for each of these products to be mapmakers, and we recently announced engagements with both [high-definition mapping company] HERE and the Japanese mapping company Zenrin.

The upshot: An important step as the self-driving race shapes up

Assuming that a majority of the world's major automakers do in fact join the REM program, Mobileye's effort stands to put its venture with Delphi and Intel in a strong competitive position as the market for self-driving systems takes shape.

I've argued that the idea of a "race" to self-driving technology isn't a useful way for investors to think. Level 4 systems will be available to all automakers within four or five years; there won't be much advantage to the company that comes to market first. We won't be able to think in terms of "winners" until the details of the different offerings become clear.

That process is starting. REM makes it likely that the Delphi-Mobileye-Intel offering will have access to maps that allow it to operate in many areas of the world, right from the start. For investors, that makes the success of the partners' system more likely, and an investment in Mobileye -- the purest play of the three -- a little more compelling.

Why Mobileye's Shares are Soaring Today

Why Intel Is Betting $15.3 Billion on Self-Driving Cars

Driverless Car Stocks: 1 to Buy and 1 to Avoid