Mobileye N.V. (NYSE:MBLY) said that its first-quarter net income jumped 53% from a year ago, to $33.5 million, on strong year-over-year growth in sales across its product line.

Excluding share-based compensation and a one-time item, Mobileye earned $0.25 per share in the first quarter, a penny ahead of the consensus estimate of Wall Street analyst polled by FactSet. Revenue jumped 66% from a year ago to $124.7 million, ahead of the $119 million estimate as reported by FactSet.

The Israel-based developer of advanced driver-assist and autonomous-vehicle systems agreed in March to be acquired by chip giant Intel (NASDAQ:INTC) for $15.3 billion. 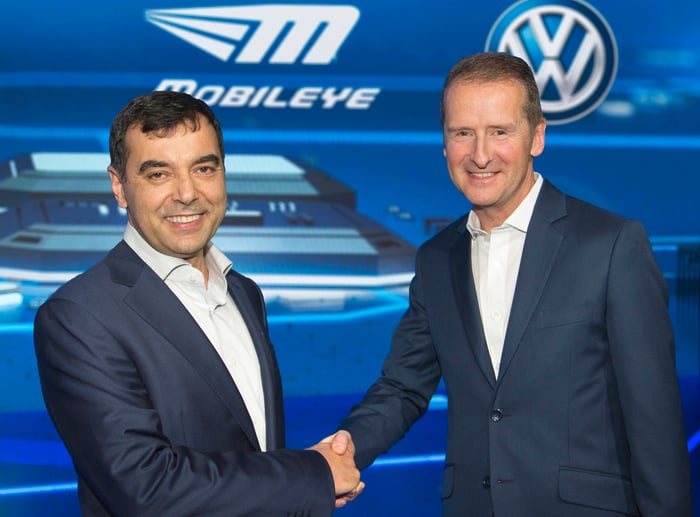 A note about the pending Intel acquisition

As noted above, Intel is in the process of acquiring Mobileye for $15.3 billion, or $63.54 per share. The two companies began working together closely last year, when they joined auto supplier Delphi Automotive (NYSE:DLPH) in two partnerships aimed at delivering self-driving vehicle systems. One aims to bring a system directly to the market by the end of 2019, the other is a joint effort with German luxury-car maker Bayerische Motoren Werke AG (OTC:BAMXF), better known as BMW.

Because of the pending transaction, Mobileye said, it didn't hold its usual quarterly earnings call, and it declined to provide forward-looking guidance.

What happened at Mobileye during the first quarter of 2017

The deal with Intel was Mobileye's most consequential news of the quarter, of course. But much more happened:

What Mobileye's CEO said about the first quarter

The pending acquisition of Mobileye by Intel will combine best-in-class technologies from both companies and accelerate delivery of a comprehensive value proposition for the automotive industry, while delivering compelling cash value to our shareholders.

Looking ahead: What's next for Mobileye

The sale of Mobileye to Intel is expected to close by the end of 2017.