Large-cap stocks are the companies that made it big -- sometimes by disrupting the "old way" of doing things, and other times by creating a brand new industry. Often, these big companies offer investors a certain amount of stability, and sometimes as the cost of much growth. However, that's not always the case, and sometimes big companies can have big growth prospects, too.

With that in mind, we asked three of our top contributors for large-cap stocks to buy in June, and they offered up biotech giant Celgene Corporation (NASDAQ:CELG), Google parent company Alphabet Inc (NASDAQ:GOOGL) (NASDAQ:GOOG), and credit card and electronic payments processing giant MasterCard Inc. (NYSE:MA). 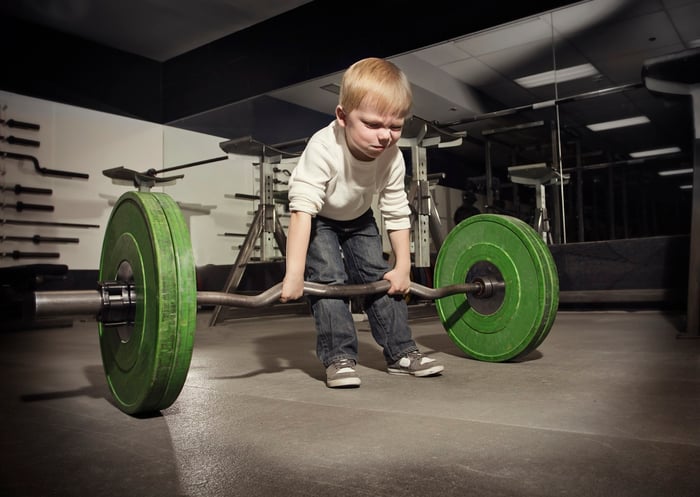 Keep reading to learn more about why these three large-cap stocks are ideal targets to buy this month.

Brian Feroldi (Celgene): The biotechnology sector has scores of companies that are long on growth potential but short on actual revenue and profits. That makes it difficult for investors to separate the winners from the losers. But biotech giant Celgene offers potential shareholders both near- and long-term growth potential, which makes it a great stock for new biotech investors to start with.

Celgene's profit engine is currently powered by Revlimid, a blockbuster treatment for multiple myeloma, a type of blood cancer. Revlimid's sales exceeded $1.9 billion last quarter, which makes it one of the best-selling drugs in the world. Sales of Revlimid are still growing at double-digit rates year over year and should continue to do so for the foreseeable future.

Beyond Revlimid, Celgene also boasts a number of other fast-growing drugs. That includes another blood cancer drug, called Pomalyst/Imnovid, and the plaque psoriasis medicine Otezla, among others. When combined with Revlimid, these drugs allow Celgene to crank out huge amounts of profits each and every quarter.

Celgene's management is quite skilled at putting those profits to work for investors. The company has a long history of using its excess capital to fund new drug development, strike up collaborations with other companies, make acquisitions, and buy back huge amounts of stock. These moves provide management with so much confidence in the company's business prospects that it's gone on record multiple times to predict double-digit revenue and profit growth annually between now and 2021. That's not something that many other $90 billion businesses can claim. With shares currently trading around 13 times forward earnings, Celgene is an excellent large-cap stock for investors to consider scooping up today.

"J" is for jaw-dropping growth

Steve Symington (Alphabet): Shares of Google parent Alphabet are on a tear, up more than 26% so far in 2017 as of this writing -- and with good reason. Alphabet continues to drive stellar top- and bottom-line growth even from its enormous base.

If that wasn't enough, Alphabet achieved its bottom-line growth despite absorbing an $855 million operating loss last quarter from its "other bets" segment, which is primarily composed of high-potential businesses still operating in their respective pre-revenue stages. To be fair, other-bets revenue did climb nearly 50% last quarter to $244 million, driven mostly by Alphabet's Nest connected-home products, Verily life-sciences products, and Fiber high-speed internet. As these other businesses continue to scale into eventual sustained profitability, it will only serve to reinforce Alphabet's tech industry leadership over the long haul. With shares still trading below 25 times this year's expected earnings -- a perfectly acceptable premium, given Alphabet's superior growth -- I think this large-cap winner will keep winning for patient investors going forward.

Follow the money and you'll probably find this company

Jason Hall (MasterCard Inc.): It's not very often that I suggest it's a good idea to buy a stock that's trading at all-time highs, but the long-term opportunity with MasterCard is simply too good for investors to ignore.

On a global basis, electronic payments make up a small fraction of transactions. But the world is becoming more wealthy, with the total middle-class population on track to add more than a billion new members in less than 20 years. At the same time, the world is also becoming more connected, with mobile computing putting the capability for electronic payments into more and more people's hands every day.

And while there will undoubtedly be competition, global giants such as MasterCard and its peers have a huge head start in ways that really matter: deep relationships with hundreds of thousands of merchants and financial institutions who count on their ability to securely and quickly move money from the customer to the merchant.

Since going public in 2003, MasterCard has increased its revenue 367% and grown its profits more than 3,000%. Going forward, management expects revenue will grow at less than double-digit rates, but its scale and operating leverage will generate steady double-digit earnings growth from that moderate revenue increase. Chances are, the company will use much of that earnings growth to pump up the dividend. It only yields 0.65% at recent prices, but with a payout ratio less than 23% of last year's earnings and expectations for years of steady double-digit profit growth, MasterCard is positioned to be an amazing dividend growth stock for long-term investors.