Biogen (NASDAQ:BIIB) has enjoyed some good news lately. The spinal muscular atrophy drug that it licensed from Ionis Pharmaceuticals (NASDAQ:IONS) won U.S. regulatory approval in December, and the launch appears to be going well. The spin-off of its hemophilia business into a separate entity, Bioverativ (NASDAQ:BIVV), went without a hitch -- and Bioverativ's stock has racked up nice gains so far in 2017.

Celgene (NASDAQ:CELG), meanwhile, saw Argus Research downgrade its stock because of its reliance on blood cancer drug Revlimid for most of its revenue. First-quarter sales for psoriasis and psoriatic arthritis drug Otezla were lower than expected. Celgene's shares were even negatively affected by disappointing earnings of one of its partners, Acceleron Pharma.

If you were to base your investing decision solely on recent news cycles, you'd probably go with Biogen rather than Celgene. That would be short-sighted, though. Here's why long-term investors should prefer Celgene over Biogen. 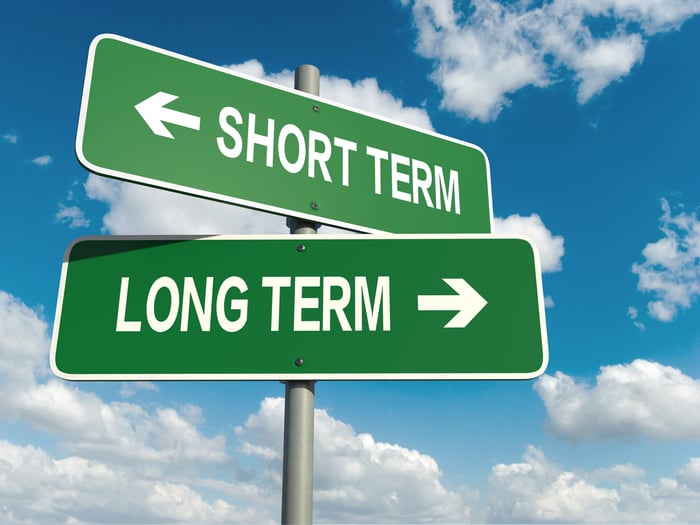 While the recent headlines might sound better for Biogen, a look at the two biotechs' first-quarter results shows that Celgene appears to be in a better position right now. The following table summarizes how Biogen and Celgene compared on key financial metrics in the first quarter.

It should be noted that the spin-off of Bioverativ in February affected Biogen's year-over-year comparisons. In addition, the company took a hit in the first quarter from $353.6 million in impairment and amortization charges related to a settlement with Forward Pharma over intellectual-property rights for Tecfidera. Still, the numbers are what they are. Celgene is edging out Biogen in revenue and earnings.

Digging into some of the details reveals that Celgene's advantage could be bigger than it first appears. Sales for Biogen's top-selling product, multiple sclerosis drug Tecfidera, increased by only 1.3% compared with the prior-year period. Sales for Celgene's top drug, Revlimid, jumped 19.7% year over year.

Sales for Biogen's No. 2 products in terms of revenue, interferon drugs Avonex and Plegridy, fell 3.3% compared with the first quarter of 2016. Sales for Celgene's second-highest moneymaker, multiple myeloma drug Pomalyst, soared 32.8% year over year. The fact is that Celgene's products are performing better across the board than Biogen's products are.

Investors are more concerned about the future than the present or past, though. How do Biogen and Celgene stack up with regard to future prospects?

Spinraza should be a big winner for Biogen. Although the drug generated sales of only $47.4 million in the first quarter, the launch for Spinraza just got started this year. Analysts think the spinal muscular atrophy drug could reach peak annual sales of $2.5 billion. Biogen will keep most of the revenue from Spinraza, but it must pay Ionis tiered royalties between 11% and 15% of total sales, plus up to $90 million in additional milestone payments.

However, Biogen's MS franchise could receive stiff competition from Roche's (OTC:RHHBY) Ocrevus. While Biogen will receive royalties from sales of the drug, it probably won't be enough to make up for the market share that Ocrevus seems likely to steal from Tysabri. Biogen also doesn't have any candidates that could beef up its MS lineup anytime soon.

There are only three late-stage candidates in Biogen's pipeline. Roche owns the licensing rights for one of them -- Gazyva, which is approved for treating chronic lymphocytic leukemia and is in a phase 3 clinical study for treating non-Hodgkin's lymphoma. The other two are experimental Alzheimer's disease drugs. Biogen could possibly enjoy success in the indication, but there are quite a few once-promising Alzheimer's disease drugs that ultimately flopped.

What about Celgene? Not only are sales for its top drugs continuing to grow, the biotech also expects reports from 19 late-stage clinical studies by the end of next year. Celgene anticipates that nine other products will advance to pivotal studies between now and the end of 2018.

Several of Celgene's pipeline candidates hold the potential to be huge winners. The company thinks it can win regulatory approval for seven drugs by 2020 with peak annual sales potential of at least $1 billion. One of them, ozanimod, could cause even more problems for Biogen's MS franchise.

I think Biogen shareholders have several things to worry about with headwinds in MS and a relatively shallow pipeline. Biogen isn't a bad stock to buy, though, with the significant potential for Spinraza and the possibility that Alzheimer's drug aducanumab could be a game-changer.

Over the long term, however, my view is that Celgene is the better pick. I recently stated that the biotech is the one stock I'd buy right now above all others. Celgene's current product lineup and loaded pipeline make it a great option for long-term investors looking for strong growth.