What do you call a stock when it's even cheaper than a value stock?

Is it ridiculous to even ask that question in a market where everything seems expensive? Maybe, maybe not. Those of us who've been around the block a few times, though, have seen the stock market misprice great businesses again and again over the years -- and even in markets as pricey as this one. We've taken the opportunity to profit from these mistakes, so when we see a great bargain today, we're unafraid to go out on a limb and declare: These stocks are ridiculously cheap right now. 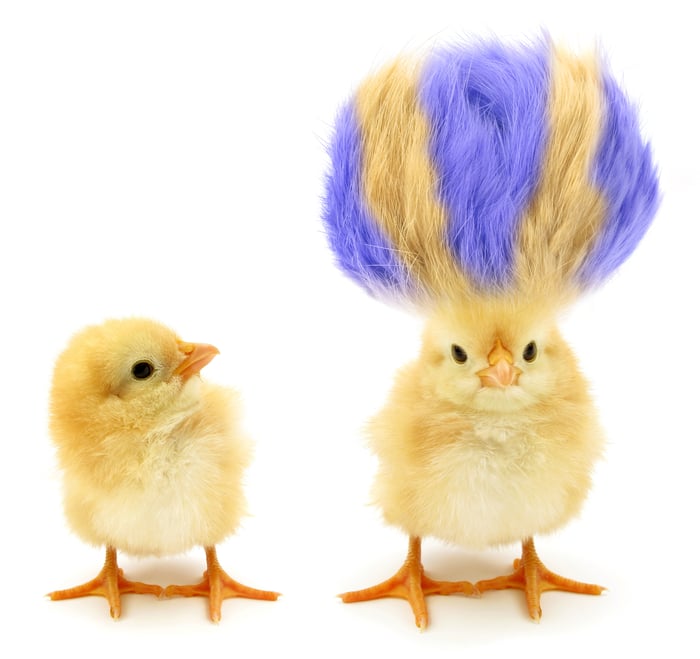 Who are you calling ridiculous? Who are YOU calling cheep? Image source: Getty Images.

A market leader in a recovering industry

Leo Sun (HP): PC sales rose year over year for the first time in five years during the first quarter of 2017, according to IDC. That 0.6% growth in shipments might seem anemic, but it dispels the notion that smartphones, tablets, and longer upgrade cycles will simply "kill" traditional PCs.

That report was also great news for HP, which retook the title of the world's biggest PC maker from Lenovo after losing it four years ago. HP split with Hewlett-Packard Enterprise (HPE 0.56%) in late 2015, with the former retaining its PC, printing, and imaging businesses and the latter retaining the enterprise hardware and software units.

HP sounds like a slow-growth stock, but its growth has been improving. Its personal Systems (PC) revenue rose 10% last quarter, as demand in the commercial and consumer markets improved. Double-digit sales growth in notebooks -- fueled by demand for higher-end devices and 2-in-1s -- offset a single-digit decline in desktop sales.

Its printing revenue also rose 2% on the strength of commercial and consumer hardware. HP is beefing up that business with industrial 3D printers, and it will expand significantly once its acquisition of Samsung's printing business closes. HP's total revenue rose 7% annually, although its earnings dipped 2% on slightly lower margins.

But looking ahead, analysts expect HP's revenue and earnings to respectively rise 4% and 3% this year as the PC and printing market warm up. The stock is still cheap at 12 times earnings, compared to the industry average P/E of 21 for PC makers. It also pays a generous dividend of 2.9%, which is easily supported by a payout ratio of 36%.

This tiny biotech has enormous potential

George Budwell (Agenus): The small-cap biotech Agenus is arguably ridiculously cheap right now because of its exposure to the ultra-high growth field of immuno-oncology. The condensed version is that Agenus has over 10 immuno-modulatory antibodies in either preclinical or clinical development at the moment across a variety of solid tumors. As an added layer of value, the drugmaker has also successfully licensed out a handful of these antibodies to Incyte Corp. and Merck & Co. -- illustrating the industry's immense interest in this rapidly emerging field of anti-cancer therapies.

Getting to the heart of the matter, Agenus' present market cap of $427 million is dirt cheap for a company that sports a diverse pipeline of anti-cancer therapies and two major pharma partners to boot. While it's certainly true that the immuno-modulatory antibody field has attracted a large number of would-be competitors and it might be difficult to carve out a highly profitable niche as a result, the fact of the matter is that Agenus doesn't need any franchise-level drugs to emerge from this effort to be considered grossly undervalued.

Even one drug capable of generating say $200 million in peak sales, for instance, is more than enough to create value for the company's shareholders. And that's a drop in the bucket for a therapeutic field that's forecast to generate somewhere along the lines of $35 billion in annual sales by 2022.

In all, Agenus isn't guaranteed a spot at the high-value checkpoint inhibitor table, but it is working on a class of therapies with a proven track record in the clinic. So with such a diverse pipeline of potent anti-cancer therapies in development, there's a strong chance that this biotech will eventually produce at least a minor commercial-stage checkpoint inhibitor. And that's all this tiny biotech should need to produce respectable returns on capital for its early shareholders.

Wall Street is wrong, and Baidu is ridiculously cheap

Rich Smith (Baidu): In just a couple of weeks, Baidu.com -- "the Chinese Google" -- is due to report its fiscal second-quarter 2017 earnings. Wall Street thinks it will crash and burn, but it's wrong.

Looking ahead to earnings last week, the bearish bankers at Bernstein blasted Baidu stock with a reiterated "underperform," warning that unlike Alphabet (GOOGL 2.42%) in the U.S., Baidu runs a fragmented business where various units are "walled off" one from another and not currently supporting each other. If Alphabet can scrape data from a "G-mail," and use it to better target an ad to a viewer on YouTube, well, Baidu can't currently do that. Bernstein also complains that Baidu is spending too much developing its Google-like moonshot "O2O" business, and it's eating up too much profit.

But here's the thing: If Baidu isn't earning as much as it should be today, that's actually an argument in favor of the company being able to earn more tomorrow than it presently does, and thus grow its profits faster, once it gets around to integrating its businesses better. Similarly, investing in new businesses is exactly the thing you want to see a rich cash producer like Baidu do, in order to grow its earnings over time. In fact, this is probably one reason why most analysts who follow these internet tech giants see Google's parent company growing its earnings at "only" 19.4% annually over the next five years, while Baidu is expected to grow 5 percentage points faster -- 24.4%.

This superior growth rate is the main reason I see Baidu stock as ridiculously cheap today, despite it carrying a higher P/E than does Alphabet. At last report, Baidu was generating free cash flow at the rate of $2.5 billion per year -- 53% better than its reported net income of $1.7 billion. That cash is piling up on Baidu's balance sheet, with the result that the stock, although valued at $64.8 billion in market capitalization, has an enterprise value of only $56.8 billion net of cash and debt.

Result: Baidu stock currently sells for just 22.7 times free cash flow. And weighed against 24.4% expected growth, that gives Baidu stock an enterprise value-to-free cash flow ratio of only 0.9 -- which is cheaper than the 1.1 EV/FCF/growth ratio of Alphabet stock.

Paying a cheaper valuation to own a piece of the dominant internet business in a country with an even bigger market than Google's... well, that seems a bit bonkers to me. Baidu stock is ridiculously cheap right now. I'd suggest buying some (and I already have).