Has the long-suffering PC market finally bottomed out?

The rise of smartphones and tablets has caused sales of traditional PCs to decline over the past few years. But during the first quarter of 2017, PC shipments rose annually for the first time in half a decade, growing 0.6%, according to IDC. Five companies controlled nearly 70% of that market: HP (HPQ 1.26%), Lenovo, Dell, Apple (AAPL 2.14%), and Acer. 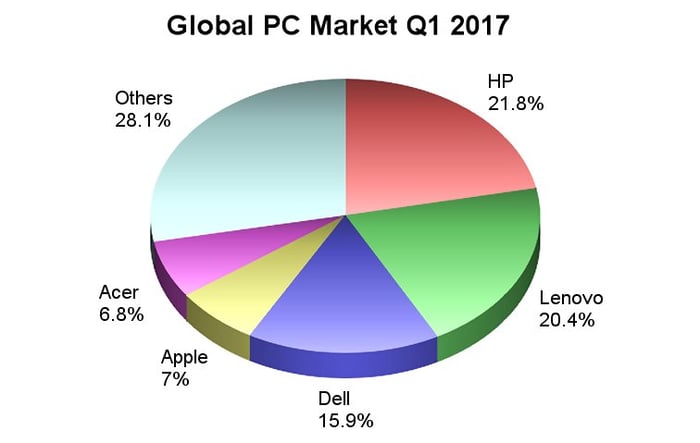 The U.S. remains a soft market for traditional PCs, with only cheap Chromebooks bucking the slowdown. Sales in Europe, the Middle East, and Africa stabilized on better demand for notebooks. Sales across Asia (excluding Japan) remained weak, as prices rose on tighter component supplies. Though strong demand for high-end ultrabooks and gaming laptops continued in China, the commercial market performed better than the consumer arena. Sales in Japan jumped on higher demand for commercial PCs.

Looking ahead, the PC market will be influenced by tighter memory supplies, which could cause prices to rise, and more demanding games (like virtual reality titles) lifting sales of higher-end desktops. But despite these improvements, average PC shipments remain 30% below their peak in 2011 -- so this probably shouldn't be deemed a recovery just yet.