Sony and HTC have cheap valuations with good exposure to the VR market, but investors should also note the headwinds facing their core businesses.

Virtual reality is often touted as the "next big thing" among tech companies. Goldman Sachs believes that the market could blossom into an $80 billion one by 2025, and Facebook (FB -0.49%) CEO Mark Zuckerberg has repeatedly called VR a next-gen "computing platform."

Sony's big bet on the VR market is the PlayStation VR, a high-end headset it released for the PS4 console last October. At $400, it cost much less than Facebook's (FB -0.49%) $600 Oculus Rift and HTC's $800 Vive headsets. A PS4 costs around $250 today -- which is much cheaper than the high-end PCs that power the Rift and Vive.

Those price tags make it the cheapest high-end VR experience on the market today. Since Sony has sold nearly 55 million PS4s, it already has a built-in customer base that doesn't need new hardware. Its existing relationships with game publishers also makes it easy to secure a steady stream of exclusive VR content for its games.

Research firm SuperData estimates that Sony sold 750,000 PSVRs last year (compared to its older, overly bullish forecast of 2.6 million). That figure doesn't sound impressive relative to its PS4 user base, but it makes it the top-selling VR headset in the world. HTC's Vive came in second at 450,000 units, followed by Facebook's Oculus Rift at 355,000 units.

750,000 units would only generate about $300 million in revenue, which translates to just 6% of Sony's G&NS (Game and Network Services) revenue and 1% of its total revenue last quarter. However, demand for the headset could soar this year as new VR-enabled PS4 games -- like Resident Evil 7, Star Wars: Battlefront X-Wing VR, and Star Trek: Bridge Crew -- make the PSVR an essential PS4 accessory for next-gen gaming.

If that happens, PSVR sales could surge well past SuperData's original estimate of 2.6 million and make the PSVR a major growth driver for the G&NS business. Higher-quality VR-enabled games will also encourage customers to upgrade to Sony's new PS4 Pro, which features 4K gaming and a smoother VR experience.

Sony's profitability has declined in recent quarters due to the weak performance of its mobile and movie making units. However, the stock trades with an EV/Sales ratio of 0.5 -- making it very cheap relative to peers like Samsung (NASDAQOTH: SSNLF), which has an EV/Sales ratio of 1.

Many investors overlook HTC as a potential VR play for two reasons. First, the early adoption of the Vive headset has been largely overshadowed by the weakness of its core smartphone business, which has been crushed between premium players like Samsung and lower-end Android rivals like Huawei, Oppo, Vivo, and Xiaomi.That pressure caused HTC's revenue to fall 14% annually last quarter, and its bottom line remains deep in the red.

Second, HTC's sponsored ADR shares only trade on the OTC market, which doesn't get as much attention as the major exchanges. 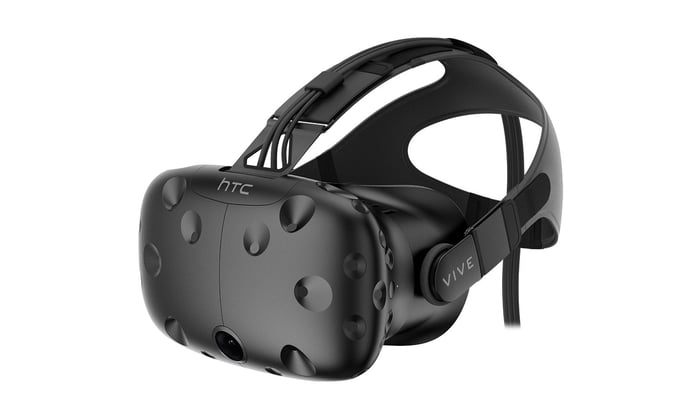 HTC stock has declined nearly 90% over the past five years, but that drop has reduced its EV/Sales ratio to just 0.4. With an enterprise value of just NT $28.3 billion ($660 million), it remains a lucrative takeover target for tech companies that want to establish a presence in the smartphone and VR headset markets.

HTC wants to turn its smartphone business around by abandoning lower-end devices and focusing on the premium market. We've seen Sony try the same strategy before, but with very little success.

While HTC's smartphone business will likely keep struggling, the Vive might post better sales this year as more PC users upgrade their systems and more VR-enabled titles hit the market. The Vive costs more than the Rift, but its use of full-room motion sensors and software support from Valve, which co-designed the device, arguably make it a better premium VR device for hardcore gamers than the Rift.

If SuperData's figures are accurate, then HTC's Vive sales generated $360 million in revenues last year -- which would be equivalent to 14% of its 2016 sales. This means that if VR adoption picks up this year, we could see stronger sales of the Vive offset its weaker smartphone sales -- which could help HTC stage a big comeback.

Sony and HTC are fundamentally cheap and have growing VR businesses, but investors should also pay close attention to the challenges facing both companies' core businesses. I wouldn't rush to buy either stock now, but I would keep them in mind as alternative VR plays to pricier market favorites like Facebook and chipmaker AMD.