While the comparable base still makes up less than half of its company-owned stores, the market punished Shake Shack for the result as some analysts believed the young chain was beginning to cannibalize itself. 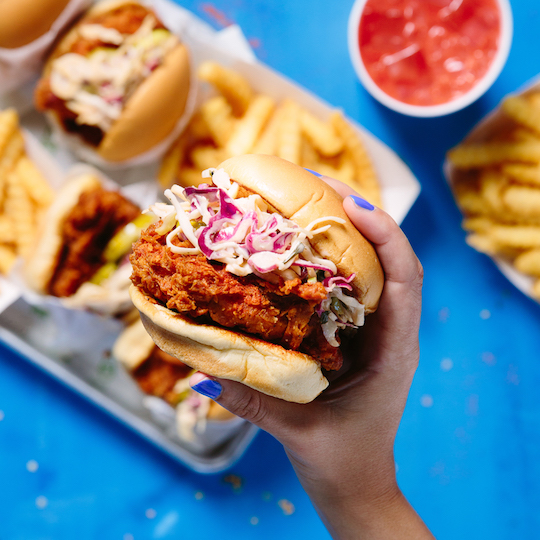 Goldman Sachs first raised the concern in April when analyst Karen Holthouse reiterated her sell rating, saying, "We have previously highlighted ... declining novelty and therefore excitement around unit opens as a risk to new store productivity, and ... cannibalization as a growing risk to traffic trends at SHAK." In other words, some investors fear that new stores are taking sales away from existing ones, which is weighing on same-store sales and could be a warning sign for the company's long-term growth.

Cannibalization or a smart strategy?

Indeed, Shake Shack's growth has come in part by penetrating a handful of cities. The company now has 10 full-service locations in Manhattan, with two more to come, and 15 total in New York City, its hometown. It also has five in Washington, DC, its next biggest market, but that is an intentional part of the company's strategy as it targets premium real estate locations in high traffic locations and malls, often in major cities. Building out several locations in the same city also helps the bottom line, as it's more efficient for the supply chain and corporate management to have multiple stores near each other.

CEO Randy Garutti addressed these concerns head-on in the recent earnings call. Discussing the two new Shacks in Manhattan, he said, "We expect each to be highly additive to total revenue and profitability. That informs our decisions much more than any concern for potential impact to our same Shack base. When great opportunities arise, you can bet we're going to jump on it [sic]." Garutti also noted that average unit volumes for Manhattan Shacks were above $7 million, meaning that it's clearly in the company's interest to continue opening restaurants there even if it takes sales away from existing Shacks. He also shared an example of a new Shack in the King of Prussia mall outside Philadelphia that took sales away from a Shack within a mile, though the two locations will still contribute $6.5 million in revenue this year.

His point -- that total revenue and profits are justifiably the company's focus as opposed to same-store sales growth -- shouldn't be ignored.

Shake Shack's valuation remains high, with a P/E ratio around 60, and it's never a good sign for a growth stock to post declining comps. But Shake Shack isn't like other restaurant chains. The company is on course to deliver average unit volumes close to $5 million this year, and actually raised its guidance for AUVs from new stores to $3.4 million from $3.3 million in its report last week.

New restaurants generally see sales grow from their starting point, so investors should expect performance at the newest crop of Shacks to improve as they mature. Of the 50 biggest restaurant chains, only Chick-Fil-A has a better AUV than those new Shacks at $4.4 million, but Shake Shack is still ahead when all of its stores are included.

The better-burger chain's restaurant-level operating margins are also best-in-class, coming in at 27.1% through the first half of the year. In other words, its restaurants generate close to $1.5 million in operating profit. A lot of fast-food restaurants don't even make that much in sales. The upshot of those numbers is that it's a no-brainer for the company to take advantage of premium real estate when it opens up if it can expect those restaurants to contribute that kind of profit.

Same-store sales may continue to lag if the company continues opening new stores near old ones, but investors would be better off focusing on overall revenue and profit growth, which remain strong.