The stock traded down as much as 8% in after-hours trading following its earnings release. The better-burger chain beat estimates on the top and bottom lines, but it posted a surprise same-store sales slide.

The next trading day, though, the market shrugged off the 2.5% decline in comps, and the stock went up 9.3%. It was especially surprising since no news came out during the earnings call that would have affected investor sentiment. 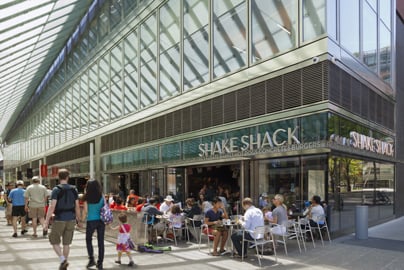 The swing seemed to underscore the difficulty investors have in valuing Shake Shack, as the standard metrics applied to other restaurant chains aren't exactly what they seem.

Same-store sales are often the most closely watched metric when measuring performance at restaurants or retailers. The figure strips out the effect of new stores, measuring only the year-over-year growth at established stores. A decline in same-store sales is seen as a negative and often a concerning sign for the brand.

Unlike most restaurant chains, which count locations in the comparable base after 12 or 13 months, Shake Shack waits two years to include stores in their comparables as their honeymoon period when customers flock to new outlets tends to be extended due to the strength of the brand. Second-year sales generally fall a few points from the opening year, and then comparable sales build from there.

Management noted that same-store sales fell 8% in March due to the shift in the Easter holiday and a crippling snowstorm in the Northeast, where more than half of the stores in its same-store sales base are located.

Still, average weekly sales fell from $90,000 to $86,000 in the quarter, indicating that restaurant-level sales growth was weak, and the company lowered its same-store sales forecast to flat for the full year, despite a small price increase.

That Shake Shack beat estimates easily even as comparable sales declined seemed to signal that analyst expectations for the company are out of whack. Earnings per share increased from $0.08 to $0.10, easily beating estimates by $0.08, while revenue increased 41.7% to $76.7 million, compared to expectations at $74.7 million.

The quarter confirmed that Shake Shack's growth will be largely determined by its ability to open new stores, as the company has a huge runway ahead of it with just 71 company-operated locations and capacity for 450 or more.

Shake Shack's average unit volumes, around $5 million, are much better than any other fast-food chains', so even if comparable sales fall slightly the individual restaurants are still much more profitable than those of similar chains.

In fact, in spite of the comparable-sales decline, the stock got a boost as Buckingham Research analyst John Zolidis upgraded the stock to buy, saying new restaurants were opening with "very robust volumes." Shake Shack also raised its average unit volume guidance on new restaurants from $3.2 million to $3.3 million for the year, backing up Zolidis's thesis.

Shake Shack has beaten earnings estimates in every quarter as a public company except one, when it matched them, and analysts still seem to be underestimating its future growth. While positive same-store sales growth would be preferable, as long as new store openings continue to accelerate and average unit volumes remain high, the stock should move higher over the coming years.