Shake Shack Inc. (NYSE:SHAK) stock has mostly disappointed investors since it debuted on the market in 2015.

Even after the recent post-earnings bump, the stock is only modestly higher than its all-time post-IPO low of $30. Since the beginning of 2016, shares have traded within a narrow range, swinging back and forth between $30-$40 while the broader market has risen.

Though the same-store sales decline in the first-quarter earnings report may have been discouraging, there are still a number of reasons to believe that the best is yet to come for Shake Shack, as the rally following the report seems to indicate. 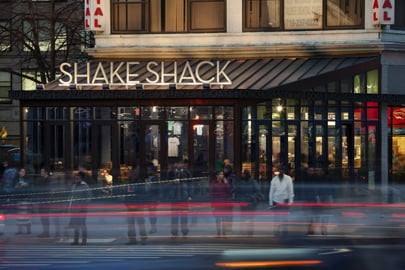 When Shake Shack IPO'ed in January 2015, management said it saw room in the market for at least 450 domestic company-operated locations, and the company reaffirmed that on the recent call.

Even after opening stores faster than it had originally projected, Shake Shack had just 71 company-operated locations at the end of its first quarter, meaning the company's domestic restaurant count should grow by a figure of six or more over time. That means that even though Shake Shack shares are pricey today, at a P/E around 70, the stock shouldn't have a problem growing into that multiple -- it will gain earnings leverage when it adds new stores as distribution and management costs fall. G&A costs, or example, which are 11% of revenue now, could be cut in half, which would nearly double operating margin.

The company also continues to accelerate its new store openings, and now plans to open 23-24 new domestic company-operated locations. Management has not indicated whether that figure would continue to accelerate, but it's likely to as it's in the company's interest to get new locations open faster. That means revenue and profits should continue to grow at a strong clip. In the most recent quarter, revenue jumped 41.7%.

While declining comparable sales is never a good sign for a retailer or a restaurant chain, falling comps matter less at Shake Shack. First, since the better-burger chain only counts restaurants in its comparable base after two years of operation, only 32 of 71 domestic company-operated restaurants were included in the comparable base in the last report. Second, the company's average unit volume, or the average revenue from its restaurants, is much higher than that of its competitors. Last year, its domestic locations averaged about $5 million in sales. The next-best major chain was Chick-Fil-A at around $3 million, while most fast-food chains have average unit volumes under $2 million.

In the first quarter, Shake Shack's average weekly sales went from $90,000 to $86,000, tracking with the decline in comparable sales due to the Easter holiday shift and a crippling snowstorm in March. Management expects that figure and average unit volumes to gradually fall as it opens locations in new markets, but the fact that it's so much higher than the rest of the industry shows the strength of the company's brand and its ability to expand. With those record average unit volumes, the company could easily open more than 450 domestic locations, but management may be wary of diluting the brand -- and prefers to open restaurants at only the highest-traffic sites.

Shake Shack has had nine quarterly earnings reports as a publicly traded company. In all but one of them, the company beat earnings estimates, meeting them the one time it failed to do so.

For the full year, analysts are calling for just 8.7% growth in EPS due in part to rising labor costs and investments in things like a new app that allows for mobile ordering. But Shake Shack keeps accelerating its store openings, and has other tricks up its sleeve, like last year's ChickenShack chicken sandwich, which became a permanent addition to the menu.

After the current year, the analyst bar remains low: the Wall Street EPS consensus for 2019 is just $0.75, or just 18% compound annual growth. That means Shake Shack should easily be able to keep beating analyst estimates if it can accelerate store openings, maintain high average volumes, and keep labor costs under control.

The path to further growth is clear, and the low expectations from analysts gives the stock significant upside over the coming years.