Weibo (NASDAQ:WB) stock has been on a tear in 2017, with shares up roughly 160% year to date as of this writing, trading at all-time highs. With an expanding user base and ad-sales growth driving momentum, the company has been able to deliver sales and earnings gains that have translated to impressive capital appreciation, and the stock is priced for the expectation that these favorable trends will continue. The chart below tracks the Chinese social media company's stock price, revenue, and earnings growth over the last three years: 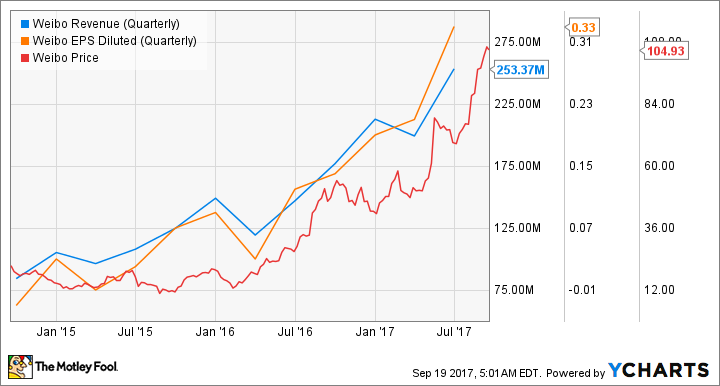 However, with shares valued at roughly 65 times forward earnings estimates, Weibo's ability to sustain its growth trajectory is under the microscope, and those considering buying shares in the company should take a deep look to determine whether it can continue its growth story.

Weibo's future growth depends heavily on its ability to expand its user base, improve advertising results, and manage its costs efficiently. If the company continues its partnerships with Chinese mobile-device manufacturers to ensure that its app is embedded in their smartphones and tablets, its social media platform should continue to benefit from the growth of the mobile market.

Last quarter, the company's monthly active users (MAUs) on domestically made mobile devices increased 74% year over year, and Weibo is working with hardware companies to improve the performance of its app on their devices, so they should be interested in continuing to embed the app so long as it remains popular. Chinese brands are expanding their market-share advantage in the country compared to foreign competitors like Apple and Samsung, and Weibo is positioned to benefit from that trend.

While the growth of new internet users in China appears to be slowing, Weibo still has the opportunity to benefit from expanding connectivity and bringing its product to existing internet users who are not yet using the social media platform.

At the end of 2016, roughly half of China's 1.38 billion people were connected to the internet, and that figure is still growing at a solid clip as more of the country's population moves to urban areas. With 361 million MAUs at the end of last quarter, Weibo counts roughly half of China's internet population as regular users of its service, and the company expects it still has the opportunity for substantial user growth in smaller Chinese cities -- where penetration for its app is lower. 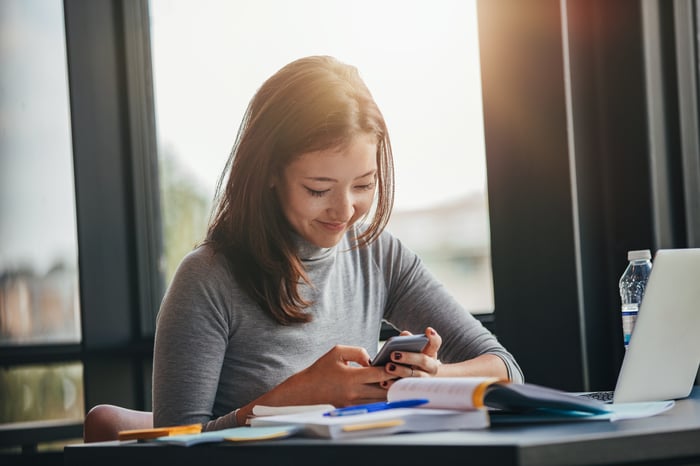 In terms of content-driven growth for its platform, Weibo's next big push revolves around becoming a leader in video distribution. Last quarter saw the company's video-based advertising account for between 18% and 20% of ad sales, and it's likely that its video business's contribution to revenue will grow substantially going forward. Average daily video views grew 159% year over year last quarter, and Weibo expects video to become the dominant visual medium on social platforms and is making investments in content and forging partnerships with major television networks and entertainment studios in order to bolster its position in the space. It's also working to improve its ad-delivery algorithms, with an improved advertising system expected to go live this quarter.

Thus far, the company is doing a commendable job of growing its sales while keeping its expenses in check, and it has room for substantial sales growth if it manages to make good on its video aspirations. Weibo's June-ended quarter saw revenues increase 72% year over year while its costs increased only 38% even as the company made a big marketing drive to grow its active user base. It's worth keeping in mind that there's a good chance that expenses will rise as the company builds out its video business, but the push into video looks to be a smart move that could have tremendous payoffs over the long term.

A promising outlook, but threats remain

Based on its earnings multiple alone, Weibo stock might look quite pricey, however it is delivering rapid growth and appears to be in position to continue to do so. Turning to another metric, the stock currently has a forward price-to-earnings-growth ratio of roughly 0.28, suggesting its stock might actually be cheap.The company also has zero debt on the books and cash holdings of roughly $609 million, so it has room to grow through acquisitions or snatch up potentially disruptive competitors.

However, there are also notable threats remaining that complicate the company's growth outlook. The fact that Weibo is a Chinese company operating primarily in the Chinese market brings with it considerable risk, as the nation's government might introduce new guidelines or enforce previously existing statutes in unexpected ways that derail the social media platform's growth trajectory. In line with regulations, the company recently issued a warning to its users that it would be getting more strict about its requirements that users register their real names with the service, and June saw the government issue a shutdown notice for some of Weibo's live services.

The company appears to be in position to continue delivering impressive growth, but the threat of additional, unexpected regulation and the stock's lofty valuation mean that investors hunting for a relatively safe bet in the social media space should look elsewhere. However, with a strong brand, the benefits of a network effect, and other promising tailwinds at its back, I think that Weibo still has big growth ahead -- enough to make it a worthwhile buy for risk-tolerant investors, even at current prices.