Chinese social-media company Weibo (NASDAQ:WB) reported second-quarter earnings before the market opened on Aug. 9 and delivered results that were better than Wall Street's expectations and its own guidance.

The average analyst estimate based on data from Fiscal Times called for earnings per share of $0.36 and sales of $246.3 million, while Weibo's sales target called for second-quarter sales between $240 million and $250 million -- so the company's actual performance came in significantly better than expectations.

Monthly active users (MAUs) reached 361 million at the close of the June-ended quarter, up 28% from the prior-year period. The company reports that 92% of its monthly users come from mobile platforms. The following graph depicts Weibo's MAU progression over the past five quarters: 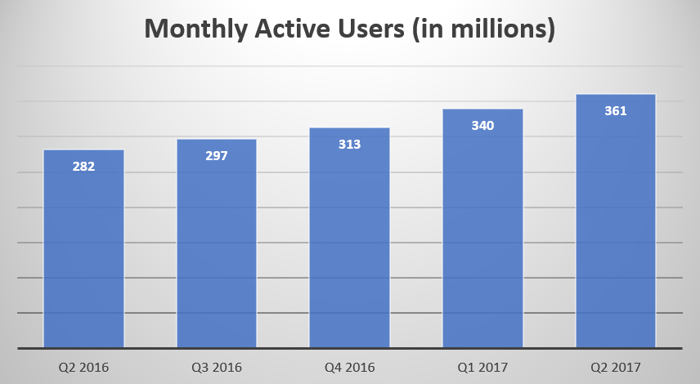 Average daily active users (DAUs) for the quarter climbed 26% year over year to reach 159 million -- also a record for Weibo.

Here's Weibo CEO Gaofei Wang on the company's second-quarter performance [he was speaking through a translator]:

We continue to see great momentum in our business. Revenues from SMEs [small and medium-sized enterprises], key accounts, and non-advertising all saw robust growth, while our profit and user base reached new highs. These strong results give us confidence that our strategy to focus on developing a unique and expansive content ecosystem, launching engaging features like Weibo Stories, and attracting KOLs [key opinion leaders], celebrities, and other influencers to increase the social and viral nature of Weibo is boding well for us.

SME advertising growth was particularly strong in the quarter, climbing 79% year over year to reach $205.1 million. Total advertising revenue for the quarter came in at $218.3 million, up from $127.2 million in Q2 2016. Performance for the company's other revenues segment (which includes paid add-on services for the Weibo social network, data licensing, and gaming-related services) came in at $35 million -- up 78% from the same quarter last year. Crucially, the company managed to deliver its substantial overall sales growth in a cost-effective manner.

Expenses increased 38% from $119.6 million in the prior-year quarter to $165.4 million this quarter, which looks quite good when stacked against the company's 72% sales gain in the period. The company's report clarified that the increase in costs and expenses primarily stemmed from increased marketing, taxes, development costs, and stock-based compensation. On a sequential basis, non-GAAP net income increased 46% on a 27% sales gain.

The company expects third-quarter sales to come in between $290 million and $300 million -- which is a good bit higher than the $276 million in sales the average analyst estimate was calling for, as tracked by Fiscal Times. Before the company's recent earnings report, the average of nine analysts tracking the stock called for EPS of $0.41 in the third quarter, but earnings targets may move higher in light of increased sales expectations.

Looking further ahead, Weibo sees its biggest opportunities coming from video streaming and adding content such as variety shows and sports to its platform. The company appears to still have strong growth prospects, but there is some uncertainty related to its video ad business after the Chinese government in June ordered the company to stop streaming video and audio content that violated regulations. Its stock has recovered from the sell-off that followed this news, but the threat of government intervention is worth monitoring.